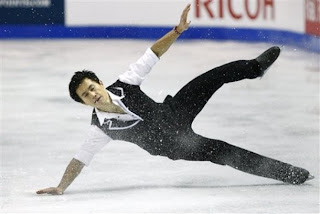 "Just imagine Debbie Wilkes saying "look how close he skates to the ice."

Skate Canada is always a memorable event.  Such an event.  It is always Canada vs. the Rest of the World.  In many ways, it is Debbie Wilkes' version of reality driving the rest of us to sheer madness.  Like Sarah Palin, Debbie Wilkes has a voice that can cause one's arm to tense and hair stand on end with sheer rage.


While I'm beyond delighted that Terry Gannon is holding our hand during the Grand Prix again, this glorious circumstance was sullied by the inclusion of Michael 'Mike Pike' Weiss.


Mike Pike told us that much of Jeremy Ten's confidence lies in whether or not he executes his triple axel.  Um, when is the last time Jeremy Ten hit is triple axel or a short program?  Jeremy is coached by the same hag who coached Sandhu...obviously a wonderful thing to put on anybody's calling card.  She is clearly a teacher of discipline and competitive consistency.  I love my gaysian, but his Jeremy Abbott costume is just not working for him.  He doesn't look like the closeted gay-boy-next-door.  The Grand Prix events have not been kind to Jeremy Ten.  Unfortunately, he has a chronic foot injury that appears to be curtailing his career.  No bueno.  He turned out of his triple axel, popped the flip, but did manage a Triple Lutz+Triple Toe and a mini Jonathan Cassar moment.  He appears to suffer from the Canadian ladies syndrome, only all of their ladies medalists make him look positively feminine.  (60.70)


Paolo Bacchini was next.  Mike Pike kept talking him up, but he didn't deliver.  Shocker.  Michael Weiss told us a great deal about his level of skating taste today and it is largely what you'd expect.  Double Axel, Triple Lutz+Triple Toe, Triple Flip "with personality."  (59.78)


Grant Hochstein's short program is becoming a major enemigo.  If I was younger, single and didn't insist on dating guys a few years older, he would be my type.  I am an ass man and he looks like a mama's boy with a scandalous side.  Now, he didn't exactly have a People Magazine cover, so some of the Asian fans may think he's dating Mao Asada or Yu-Na Kim.  Perhaps he's in a mad passionate love affair with Kanako?  That said, he did inform us that he watched Michelle Kwan's 'Winter Song' on repeat for four hours last season.  That is all we needed to know.  Triple Lutz+Double Toe, Triple Axel (fall), Triple Flip.  He is a gorgeous skater, but needs more command.  I'm positively jealous of his smile and hope he will start learning how to perform short programs under pressure.  My Fantasy Team hopes that he will come back fighting in the free skate like he did in Finland.  (56.98)


Yasuharu Nanri was a rather lovely skater yet again.  He is nice, but he doesn't give you enough FACE. He needs to spend a little time in Michigan with Krylova.  Perhaps most of the Japanese National Team should?  Triple Axel, Triple Flip+Double Toe, Triple Lutz, lovely Japanese basics and knees.  Unfortunately, his combination spin was S      L      O     W.   (61.00)


Kristoffer Berntsson- First off, I really dislike how this guy spells his name.  He is the type who probably really bitches about misspellings too.


"My apologies. I have a nephew named Anfernee, and I know how mad he gets when I call him Anthony. Almost as mad as I get when I think about the fact that my sister named him Anfernee. "


Using Amelie a year after Amodio owned it is not the best, but this 28 year-old doesn't have many years left.  He's a little old to be skating in the first flight.  I'm starting to judge him and place him in the Fumie Suguri category.  Triple Axel- hand down, (then he shook it out as choreography,) Triple Flip- Fall, Triple Loop- No Combo.  (57.49)


Javier Fernandez delights us all with his colorful costumes and hot mess programs.  Javier and Florent training together...what a duo of long programs!  Viva Espana!  El tiene mucha personalidad.  His Triple Axel was like BUTTAH, he saved a Triple Lutz+Double Toe and hit a Triple Flip.  Love him.  Just love him.  (66.74)


Rachael Flatt's Cuter Brother was next and landed two quads and a triple axel.  He is very Tim Goebel in that you find yourself having an internal debate over whether to celebrate his athleticism or fret over the lack of choreography, presentation and skating skills.  In some ways the debate is good, as you pay less attention to what is actually going on on the ice.  (80.09)


Artur Gachinski is yet another Token Sloppy Russian Mess...with jumps.  From the costume alone, it was evident that he was a pupil of Mishin.  How many awful crimes against sight, optometry, and taste has that one man committed?  Um, news flash Artur, it is not 2009 Worlds...the Pink Floyd phase is over.  Aside from his jumps, he is just another average skater vastly inflated by Mother Russia bonus.  Quad Toe- turn out, Triple Axel- NICE, Triple Loop.  (66.57)


Next was Adam "Bliss" Rippon with his stunning new Romeo and Juliet program.  It was the best 'program' of the night.  Adam wanted to read Romeo and Juliet, but he decided to settle of the Cliff's Notes.  He is disguising his back pumping well, but there was a moment between jumping passes where it was a smudge on an otherwise gorgeous masterpiece.  His Triple Axel was one of the nicest we've ever seen from him, his Triple Flip+Triple Toe was easy and his Rippon Lutz a dream.  His combination spins are so gorgeous and such a delight.  The extension is marvelous, even if Debbie Wilkes prefers starfish hands.  He is racking up a number of clean skates and we can only hope it will stay like that once he adds in the quad.  He is the Anti-Chan.  He'd rather be clean and solid than a hot mess hoping to luck out.  (77.53)


Alban Preaubert was next.  He reminds Michael Weiss of one of his favorite skaters, Laurent Tobel.  He mentioned his reliance on humor.  Funny, I'm shocked he didn't make a comparison to the great Scott Hamilton, as Scott's leg line and Alban's skating make me feel the same inside.  He has all of the French tackiness without any of the charm.  He landed his jumps...the ones that I saw when my brain wasn't wishing it was in a coma.  (69.71)


Patrick Chan was next.   According to WestPalmBitch, "Who told her she could skate to Take Five?!"  His Quad Toe was one giant big ass fall.  His edges are a case of being too good that he gets out of control...at least when it comes to jumping.  His Triple Axel was a delightful wipe out.  Yes Debbie Wilkes, his jumping issues are clearly solved.  Skating self-proclaimed Jesus managed to slip and fall during his heralded footwork sequences.  So, those are three falls in one short program, yet Chiddy scored 7.61 in Performance Execution.  Only Nobunari Oda outscored him.  Seriously.  Performance Execution.  Three Falls.  That is all that needs to be said about the legitimacy of the IJS and internal judging as a whole.  "He fell on the quad, but he fell so well on the quad.  Plus three!"  (73.20)


Nobunari Oda didn't take advantage of his jumping ability.  He is nothing without the Charlie Chaplin charm.  He landed his jumps with wonderful knees, but his program was about as effective as a Chinese floor routine from the nineties.  (81.37)


I can't wait for the free skate.  Until them, have some fun poring over these results.
Posted by OlympicEffect at 5:16 PM