It was the ladies' turn at NHK last night. As expected, there was much anticipation surrounding the performance of reigning World Champion Mao Asada. A recent rule change was seemingly to her benefit, which enables skaters to perform a triple axel instead of a double should they so choose. However expectation did align with reality, as Asada currently finds herself in 8th place after the SP. Meanwhile, Italy's Carolina Kostner finds herself at the top of the leader board with a slight lead over Asada's compatriot, Kanako Murakami. 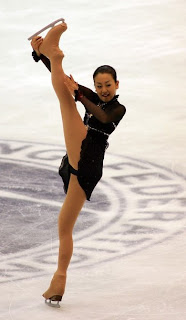 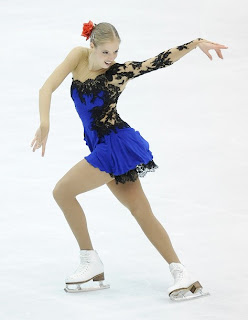 The dress fits and other surprises during the Ladies SP at NHK.
Ten-year-old Lena Marocco opens the novice ladies event with a sass the French ladies have not seen since the likes of Vanessa Gusmeroli and a youthfulness not seen since the likes of Kim Gwang Suk. It is also worth noting that Marocco (who is actually turning 15 in November), while no Swiss spinner, maintains very creditable centering on her spins. And by using the word “creditable” in a sentence, I feel that much closer to Dick Button. Lena’s Gusmeroli-like flair should come as no surprise, considering she too works with Allen Schramm, who notably choreographed Vanessa’s equally jazztastic SP to “The Mask” back in 1997. With a fall on a solo triple flip, Lena scores 41.67.
Canada’s Diane Szmiett follows. The score alone should be enough indication of her performance, as she’s about ten points lower than Marocco, who finished 11th out of 12 skaters. Here’s to a more successful showing in the free, Diane.
This year’s Turandot entry comes from Viktoria Helgesson of Sweden. Normally I’m pro platinum blonde in sparkly periwinkle. Normally… This might be the first time I’ve seen an unnaturally blonde Swede. At any rate, Viktoria scores a 43.66 with a fall on what I’m assuming was to have been a triple flip-double toe combination.


Jenna McCorkell unveils Kevin’s two-year anniversary gift, an endearingly dominatrix-lite nightie that doubles as a skating dress, one that allows her to get into character for her SP to the Mrvica version of Totentanz. She lands most of the jumps, save a touchdown on the solo triple, but she doesn’t quite skate as deep into the ice as some of the athletes we will see later in the evening. Less knee bend, edges not quite as secure. 49.07 for Jenna. 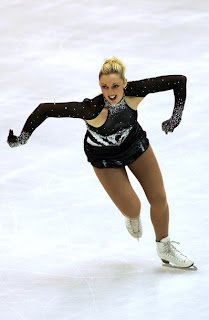 Ashley Wagner, looking slimmer than in season’s past, appears to have ditched her Led Zeppelin SP in favor of last year’s “Once Upon A Time In America” program. Aunt Joyce refers to the accoutrement around her neck as a “jeweled penis snake.” Amen. She lands her triple flip-double toe combination once again with her trademark slightly wild free leg that makes me doubt she’ll ever be able to compete a triple-triple again.
Or as Aunt Joyce puts it, “I believe Wagner will do a 3/3 like I believe the Pope will let gays get married.”
Triple lutz landed, edge looked cleaner than in the past. Double axel underrotated, as evidenced by the wide-swinging free leg. Lovely layback. I wasn’t a fan of this program last season, but I think she’s figuring out the nuances of it this season. She’s dialed down a lot of the frenetic choreography, and overall it feels less busy and much more edited down. 52.93 for Ashley. Haven’t checked the protocols; I’m assuming the axel was downgraded?
We next turn our attention to Yamada’s latest wunderkind in Kanako Murakami. The salesgirls at the Nagoya branch of the Sanrio store are to be commended, as Kanako is all smiles in her relatively age-appropriate Hello Kitty halter dress while skating to the music “Jumping Jack” (so sayeth IceNetwork). Lands a triple toe-triple toe combination and performs a step sequence that I’m not sure whether is supposed to be serpentine or straight line. Still not a fan of her picking technique, but her Miyazaki-like exuberance makes me wanna eat ice-cream filled mochi and play with our Kodomo manga puffy-sticker collections. Had it not been for Wagner’s axel, I would have placed Ashley ahead of Kanako, and I certainly would have had Wagner ahead on PCS. 56.10 for Hello Kitty.
Schilling for Clairol Nice ‘N Easy is the newly blond Elene Gedevanishvili. Nature made you brunette for a reason, Elene. Skating to the music of “Chicago,” she has a turnout on the lutz and singles the axel. 44.51.
Fresh from the gym and a new regimen of whey-protein shakes is Mira Leung masquerading as Caroline Zhang. She makes good on the promise of improvement with a mule-free triple flip-double toe combination. Triple loop is still a bit of a corker, but she completes the jump. Double axel still loses momentum from entry to exit, combination spin slower and lacks the centering compared to the past but layback impressive as always. 50.71 for Zhang. Reworking jump technique is not an overnight process. And apparently no photos of Zhang at NHK exist.
Rachael Flatt is trying to be expressive, but actual success at emoting might be asking for too much. She is trying, and I will be the first to give her that. She’s also sporting a short haircut that Margaret Thatcher seems to think is an improvement. 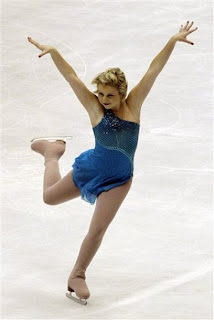 I’m undecided.
I find it to be very reminiscent of a rather butch and very kind Mormon cheerleader named Danielle who used to man the bottom of the pep-squad pyramid. Danielle was also on the softball team and was vice president of the Associated Student Body (the Mormons were very powerful at my high school, you see) my sophomore year and a select few seemed to question her love of Melissa Etheridge’s “Come To My Window.” According to Facebook, Danielle has since married (a man) and has two kids. Rachael, meanwhile, has since landed all three jumping passes and completed her short program, to music, which I cannot recall because I was thinking of Danielle the nice, butch cheerleader with the Flatt-like haircut. Aunt Joyce wants there to be several references to a sack of potatoes, but I feel like we’ve spent more than enough time dissecting the nuances of Ms. Flatt’s performance.
I had asked Aunt Joyce his thoughts on young Rachael, and he offered up these salty morsels of wisdom: “Flatt is trying to be sexy. I can’t. I love how her double axel never gets off the ground. She goes into it like it will be a highlight, but Rachael's jumps are never a highlight nothing is. Her program is like embarrassing. It is a hot mess.”
Well actually it might be a cold mess, considering these ladies ARE traveling on steel blades across a pond of ice. But apart from that minor quibble, who am I to argue with Aunt Joyce?
Rachael seems generally pleased with her performance and scores a 53.69, which will put her into 3rd place after the SP.
Kiira Korpi, looking every bit the prom queen of a very wealthy suburban Scottsdale high school (Arizona AJ readers, are there any non-suburban and/or non-wealthy high schools in Scottsdale?), lands a double toe-triple toe combination. Solo triple loop landed forward and possibly UR. Her program is to a muzak’d version of “Somewhere Over The Rainbow.” I suspect Kiira does not know what it’s like to be at the bottom of the pep-squad pyramid. I suspect Kiira only knows the top. Do you think they have pep-squad pyramids at Finnish high schools or is that strictly a North American pastime?
Carolina Kostner has wisely decided against a wedgie-revealing dress as well as avoiding the stereotypical red/black combination so often donned for Spanish-themed programs. In a move of sheer originality, instead, she has not only adopted the same Lori Nichol choreography of Kimmie Meissner’s Galicia Flamenca program, but the same color scheme as well. Still, it looks much more suited to her, both the music and costuming, than it ever did on Kimmie.
Aunt Joyce says Lori makes a lot of money off of recycling, but that at least she’s being environmentally friendly. Oh, Joyce, ever the optimist.
As usual, Carolina likes to make the cameramen hate life and their jobs by moving across the ice faster than the cameras can allow. Despite swaying to-and-fro in the air, she manages to land her triple loop. I feel as if I’m not supposed to like this routine, but I do. I really do. Carolina seems much more at home in this choreography than I’ve seen in a while. Her jump combination confuses me, and it requires several repeated viewings and reassurance from Aunt Joyce that I did, in fact, watch her complete a triple toe-double toe combination. I also find myself not hating her layback. She earns a 57.27, which will win her the short program.
The final skater of the evening is young woman named Mao Asada, who is skating to a tango by Schnittke. This Mao is not be confused with the “Mao Asada” who skated last year to “Bells of Moscow” and reminded people of a vampire roaming the French Quarter of New Orleans. As Mao Asada attempts her first jumping pass, it becomes clear that “Mao Asada” has taken over and kept the Real Mao Asada stashed away in a broom closet near the arena entrance. I support this theory with the fact that “Mao Asada” vastly underrotates her triple axel and two-foots the landing. It would appear as if she slipped on the takeoff edge, causing her to spin diagonally in the air. “Mao Asada” proceeds to land a triple loop-double combination so as to fool the casual viewer into thinking an abduction has not occurred. “Mao Asada” then thinks she can fool us into ignoring the popped flip out of footwork. Combo spin has nice stretch and centering, as does the flying sit with the edge change. Much of the footwork is performed on one foot, but it doesn’t matter. The damage has been done. “Mao Asada” has sought her revenge.  47.95 for “Mao Asada” of Japan. We can only hope a janitor finds the Real Mao Asada during his nightly rounds and unleashes her from the broom closet.
Standings After the Short Program: