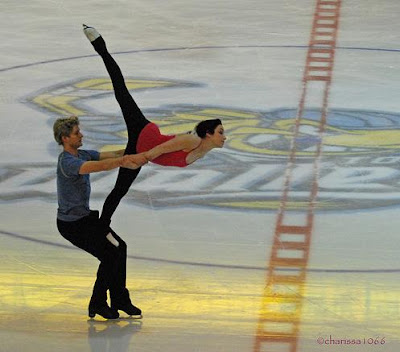 The Grand Prix Season is upon us. With gymnastics worlds about to get underway, it feels like we all need to take a deep breath before we embark upon a truly manic episode that will be the next six weeks of our lives. People may only want to talk to us on Sunday night or Monday mornings, because any other time involves far too much stress and angst.

The ISU used to begin the Grand Prix with Skate America and then gradually move across the globe with a sense of order and dignity. That is no longer the case. Skate America is no longer important enough to be first, so NHK will start things off this year.

Skaters and coaches will then haphazardly fly back and forth the globe in chaotic fashion. While we used to ease ourselves into the time changes that would be the latter few weeks (or earlier few depending on what side of the globe you're on), we now find ourselves ready for any and all time changes. One is not a true fan until they've seen the sunrise waiting to see whether Johnny Weir will land a 3-3-2 combo and earn a trip to the Grand Prix Final.

Skatenastics fans are neurotic Type A personalities to begin with, but the Grand Prix mania brings on a level of rage. In the coming weeks, one will think nothing of shouting "YOU FUCKED UP MY FANTASY TEAM" whether or not other people are present. Fantasy Skating is where it is at. After missing the first two events last year, WestPalmBitch and I are hell bent on making sure that Gaysian Attorney goes down. His prissy little ice dance-loving self has let his success go to his head and needs to be taken down a notch or five. Eliot Halverson is also known to be a fantasy whiz.

This year's NHK Trophy features a field that has me giddy with excitement. Unfortunately, my sister selfishly decided to get married to some drip the same weekend as the new skating season is officially underway. Am I more excited for Marlie's new programs or the wedding? Honestly... maybe it is best that we leave some things unsaid;)

Just texting today, I could feel the excitement building. There are Grand Prix events and then there are the ones that Meryl Davis and Charlie White will be competing at. As Jenny Kirk says, they are going to win EVERYTHING this year! What gorgeous designs will Meryl be sporting?! We've been waiting with anticipation to see how they will top the side twinkle! Just because they have new programs, it does not mean that we need to stop singing along to Devdas or imagining ourselves to be Bollywood princesses.

Competing in Marlie's presence will be Elena Ilinykh and Nikita Katsalapov, otherwise known as the fierce Russians who ended Schindler's List with him shooting her in the head. They may have gone the traditional Don Quixote route, but we still can admire what gorgeous people they both are. They may not be able to twizzle, but their line and extension sure make up for it. And the gun shots! We must never forget the gunshots!

Cappellini and Lanotte should also find themselves on the podium. They certainly have something to prove after last spring's Worlds mishap.

The always unpredictable Jeremy Abbott will be competing after a month of boot problems. While I certainly wish him the best, he isn't exactly a risk one needs to take for Fantasy.

Daisuke Takahashi is a shoo-in for the title and the question will be just how much gaysian hair gel he will be sporting this season.

The always entertaining Caroline Zhang is said to be sporting new technique and claims to working on things like speed and jump entrances. We can only pray she won't abandon her disgusted Kiss and Cry reactions.

Ashley Wagner is also known to display moments of bitchiness and that makes up for any jump issues she may have.

Rachael Flatt may afford us all an opportunity to take a bathroom break. Her Slaughter On Tenth Avenue is a snooze...even for the skater who is known to blaaah us all along.

Margaret Thatcher is very concerned about Mao's showing at the NHK. Now that she's working on her jump technique and attempting a full arsenal of triples, her consistency has gone to shit. While an uneven showing is to be suspected, the Japanese press will absolutely magnify it to such a level that panic will begin. According to The Iron Lady, "Mao should just withdraw and claim she finally got her first period or something."

The bright spots of this competition simply don't end. Machiko Yamada will bring her latest prodigy, Kanako Murakami, to her first senior international event and win us over yet again. Florent Amodio will be fabulously French, Kiira Korpi will be pretty and non-threatening, that Carobomb may strike again (Kostner doesn't know when to quit), and Pang and Tong will be utterly delightful.

Given that the wedding is next weekend, Catty Comments and Margaret Thatcher will be offering their own commentary. TheUSOpenLineJudge will also be helping with commentary, results and news.

For those who are concerned, Team Mao will be well represented by the former prime minister. We will try to keep Thatcher away from ice dance as he is still angry with Meryl for stealing Tanith's national title.
Posted by OlympicEffect at 6:01 PM