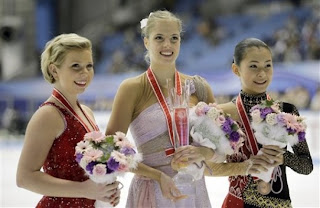 Carolina Kostner was crowned the champion at NHK Trophy on Friday. Joining her on the podium was Rachael Flatt (who won the free) and Kanako Murakami (who captured the bronze in her senior GP debut).
Many congratulations to the medalists. Overall, however, it was not a pretty night. Tarasova's Mink takes you back to the good, the bad and the unfortunate. Mao's got the right idea. Flee, run while you can if you are faint of heart. 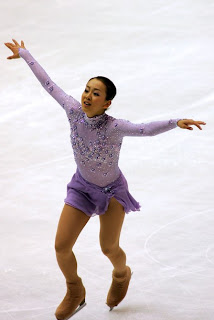 Without further ado...
Diane Szmiett of Canada opens the ladies’ free, skating to Phantom Of The Opera.
Her program unfolds in soft, lyrical fashion: the organ grinder music-box version of “Masquerade.” Soon it becomes clear that this will be the highlight of the performance. Her spins are superior to her jumps. Given the way she lurches forward before takeoff, that isn’t saying much.
The program segue ways through various muzak’d cuts of Phantom, eventually transitioning to “Wishing You Were Somehow Here Again.” The strings swell as Diane sits down, rather brusquely, on a triple toe. She dusts herself off, perhaps wondering why the Angel of Skating hasn’t come to her rescue, and then the camera moves in tight on her face. 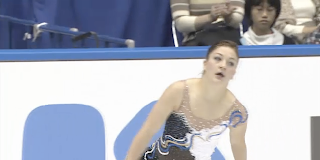 She knows what we’re all thinking.
And when YOU know that SHE knows, suddenly it’s not quite as funny. Probably because she’s thinking the same thing herself: Years of training have led her to this moment, and all she has to show for it is an ass splat and the applause of an apologetic arena. No elite athlete wants your pity, and unfortunately that’s about the extent of the emotion I can give.
I am reminded of a quote from that definitive film about the competitive world of dance. No, I’m not referring to “Showgirls,” but rather that equally moving tribute to music and movement known as “Center Stage”:
“It’s a heady thing, being the best. Teachers dote on you; other students ask for your help. And an aura builds, and then you get accepted to ABA. And whether or not you admit it, you start thinking: ‘It’s just a matter of time before you’re doing Giselle before packed houses in Lincoln Center.’ For most of you, that will never happen. I don’t say this to be cruel; I say it to help you clarify your expectations.”
These skaters are on the biggest pond in the world, and it’s frightening how quickly things can slip from being the best in the rink to sitting at the bottom of the standings.


Diane continues to fall, even on a flying spin. She hits her ending pose, and at last the bloodbath is over. It’s times like these that you wish there were illusion fabric to hide unsightly facial expressions. I think she’d look infinitely happier with a bedazzled smile. 56.43 for Diane’s FS, which is lower than some of the scores we saw in the SP.
Everyone’s favorite spunky 10-year-old, Lena Marrocco, then takes to the ice in a royal blue-sequined dress that is both simple and adorable. It is the same shade of royal blue as the Olympic Champion, and it makes me feel happy. And don’t we all deserve to feel happy after bearing witness to the abortion that was Diane’s freeskate? 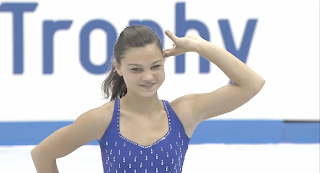 Skating to “Sing, Sing, Sing” and “The Mask” I’m beginning to wonder if Allen Schramm is less heralded for his originality because he’s actually a one-trick pony. No matter, the style suits young Madeleine and seems to mask the fact that her edges don’t seem all that secure and her jump technique makes landings a bit of an adventure. I call her Madeleine by virtue of the fact that, like the beloved animated heroine, Lena is also French, also adorable, and also likely has yet to hit puberty. 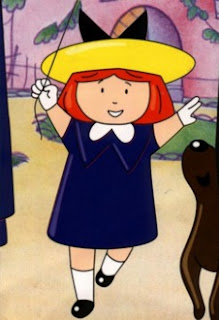 Madeleine receives an 80.36, and I can’t help but wonder if her PCS would go up if she skated with a balloon in her hand and a wide-brim straw hat on her head.
Following in the grand tradition of Scandinavian beauty queens who like to wear skates in their spare time, Viktoria Helgesson performs a rather forgettable program to selection of pieces called “August Rush,” “Sad Romance,” and “The Drummer.” During much of the performance, I’m torn between which sounds most like an enticing new fragrance by Elizabeth Arden, which sounds most like a Lady Gaga parody, and which one sounds most like a porno. While I realize this program may have won her the talent portion of the Miss Sweden competition, turning out on a double axel combo and singling a flip just ain’t gonna cut it for the title of Miss NHK Trophy. 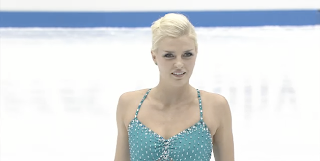 The latter portion of Helgesson’s routine conjures up images of Shawn Johnson’s FX from Beijing, and it makes me start to hate Viktoria just a little bit. She receives an 86.45, which includes a point deduction.
Blonde Elene Gedevanishvili is next, and for the free she has decided to play the part of evil Cotillion queen. Dressed in a frilly cotton-candy confection, she skates to nearly the same cuts of Phantom as Diane S., except she decides to rub it in Diane’s face by landing more than one jump.  A total of four triples overall. 97.01 for Elene, which will impressively place her third in the free.
Free from the broom closet but watching helplessly from the sidelines is Mao Asada, who watches as her evil twin proceeds to sabotage her new LP to Liszt’s Liebestraum.
The less said about this particular performance, the better. It’s still quite early in the season. Plenty of time for a court-issued restraining order against Bad Mao, who scores 85.45. 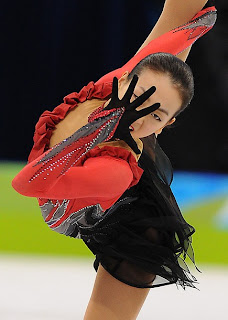 Next up is Jenna McCorkell, who decides she’d rather go home and have consolation sex with her husband than skate well. Mrs. Van Der McCorkell stumbles her way to a 72.45 and cackles madly while exiting the building.
Following the warmup, Miraline Leuang skates to Dvorak. What once looked fresh and otherworldly as a junior has long since become rather labored and ordinary. It makes me both amazed and sad that someone as talented as Caroline (along with her mother) could be so blithely unaware of the deficiencies in her skating for so long. The jumps aren’t there now, will they be in the coming months? I’m loath to comment on the program itself; massive change seems inevitability at this point. I will say the music does very little to enhance her skating, but that could just be the performance itself talking. 83.15 drops her to ninth in the free.
Kiira Korpi shows off the pregnancy-stick-colored tie-dye job she did on Nancy Kerrigan’s wedding dress from Albertville. She lands three triples, a fact that she will use to taunt Laura Lepisto when she’s feeling particularly bitchy during those long plane rides to and from Finland. The performance, to “Evita,” earns Kiira a 95.84 and an F-U from Lepisto, who calls long distance from the motherland to say that she can score in the 100s with all doubles, so suck it, blondie.
Next up is Ashley Wagner, who inexplicably decided to skate her free to Lecuona’s Malaguena. Geez, could you get anymore obscure with these strange, abstract music choices, Ashley?
As the unfamiliar strains of Malaguena begin, Ashley spends a good 5-10 seconds standing in center ice posing, perhaps allowing our virgin ears to acclimate to this foreign, wildly unusual selection of music. She opens with a touchdown-turnout combination, and that pretty sets the tone for the rest of the performance.
Let me pause for a moment to say this about Ashley: I think she suffers from a similar problem as Rachael Flatt, artistically. They’re chronically selecting music and performing to choreography for which they are largely ill-suited to.
There’s something very American and modern about Wagner, and I find it strange that she’s constantly skating to these old European warhorses that look dated and fussy on her. She is not Sasha Cohen. She cannot pull off Malaguena. She cannot pull off Polovetsian Dances. I thought Led Zeppelin could have been a step in the right direction. Even the plaintive romanticism of “Somewhere In Time” felt more organic on her than most of these other choices she’s given us. Know thyself, Ashley. I realize this is a tall order at a young age; it’s a tall order at any age. But when your body is your canvas, the self-awareness is everything. End of rant.
Ashley receives a 90.80, placing her sixth in the free.
We move from one American to another, as Rachael Flatt skates to “Slaughter On Tenth Avenue.”
Picking on Rachael Flatt is like when I told the fat kid who used get a rise out of kicking my chair that his blubber jiggled whenever he’d laugh. There’s just some places you should not go, unless you really need to shut them down. Completely. Given the trajectory of Rachael’s life, I see no reason to shut her down completely. Quite frankly, I have a hard time seeing her last until Sochi. I’m no fan of her skating, like, AT ALL. But I suppose it’s unfair to hold her responsible for everyone else sucking. She can’t help it if her God-given skating gift is consistency and little else.
Rachael (who, while soft, most certainly does not have enough blubber to jiggle when she laughs) is once again the model of consistency and mediocrity, reeling off an impressive triple-jump clinic, including a new double axel-triple toe combination.
While I think Rachael’s programs this year are a step in the right direction, I do not wish to give her the wrong idea. We do not want to encourage Rachael Flatt to be flirty with the audience or the judges. Her appeal is not one of a sexual nature. That might be why I found “Sing, Sing, Sing” as close to a success as anything else she’s done. It was fun but didn’t try to be particularly sexy. She receives a 107.35, and that would have left an even stranger taste in my mouth had I known at the time that this would be the winning score for the free.
We then say hello again to Hello Kitty, whose costume is a cross between an Elizabethan court jester and the woman on the cans of Rosarito Refried Beans. Given that Kanako is also likely 98% fat free, I can understand the strong connection she and her costumers must have to canned Mexican-American goods. 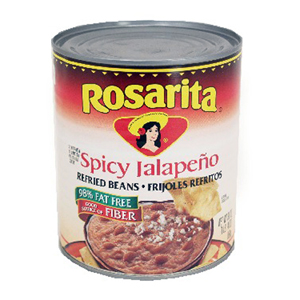 Skating to the soundtrack from “The Mask of Zorro,” Hello Kitty takes us back to an era gone by. The year was 1999, and we were fresh off the Olympics in Nagano. The most overused soundtrack of the year was James Horner’s score to the Antonio Banderas reboot of Zorro, and Michelle Kwan was dusting off her triple toe-triple toe combination after shelving it due to a toe injury during the Olympic season. Flash forward to 2010, and in full-retro glory, Kanako unleashes her own triple toe-triple toe to much applause. She then survives a triple lutz before falling on a triple flip. And another triple flip. And then a triple loop. Ever the fighter, Hello Kitty sells the straight line footwork and final combo spin like there’s a giant stuffed Badtz-Maru at stake, but it’s too late. The disappointment is evident, and the judges place her fifth in the free with a score of 94.06.
That takes us to the final skater of the evening, Italy’s Carolina Kostner, skating to Debussy’s “Prelude To The Afternoon Of A Faun.” I’m already biased in favor of this music, as it has been performed to perfection by Janet Lynn and Yuka Sato. 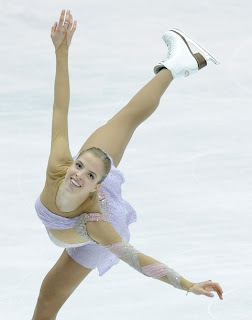 Kostner’s interpretation doesn’t challenge either of those ladies, but there’s real promise here. The whimsy and lyricism of the music suits her willowy frame. Jump landings are so-so, which for a Kostner performance is better than usual. She finishes a hair behind Flatt in the long, with a 107.34. It’s enough to take the title overall.