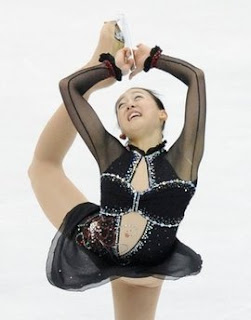 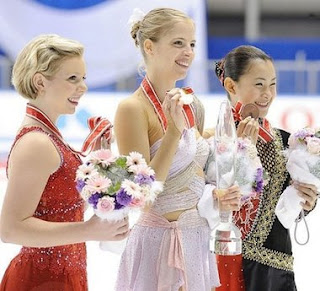 First, let us congratulate Aunt Joyce's sister. She tied the not this weekend. I wish her and her brawny Italian American husband a long and happy marriage. I was not able to make it to the wedding, but I am certain that Aunt Joyce performed her role in it beautifully.

Mao Asada's NHK performance in Nagoya was unequivocally bad. The attempt to re-work her jump technique has altered her timing and left her looking like a skater without purpose. One wonders if she might have been haunted by having to perform under the gaze of her former coach of many years, Machiko Yamada, the woman who taught her the triple axel. Yamada, who first rose to prominence as the coach of Midori Ito, was present at NHK as the coach of Kanako Murakami, the 2010 World Junior Champion. While Kanako delighted the audience with cuteness and won the NHK bronze, Mao finished down in 8th. She suffered the humiliation of losing to Robin Wagner's latest pupil, Elene Gedevanishvili. Worse still, Mao finished behind an out of breath Caroline Zhang.

In light of this, a fan or two has remarked that Murakami is "the new Mao". Although Murakami has great potential, this is not a reasonable assertion. It implies that Mao is gone or even going. Such an assumption is extraordinary. Mao's incredible abilities have not evaporated. Her flexibility, her speed, and her ability to execute beautiful choreography all were evident in Nagoya. After the event, Mao offered us reassurance that she will be able to complete her jumps: ‘‘Nothing has changed emotionally. I haven’t fallen to pieces and I am moving forward in training. Once I have enough practice under my belt I will be able to perform that in competitions.’’(Asada Vows to Rebound). If this tells us what Mao is really thinking, then we can expect dramatic improvement down the road.

Now let us discuss Kiira Korpi of Finland. She was for most of the gay audience, including myself, the highlight. Nancy Kerriganesque but more beautiful, she became Eva Peron. I will admit I am glad now that the European judges have tried so hard over the years to cheat for her.

Caroline Zhang's performances were labored and ineffective. Although her jump technique has improved, the quality of the spins and the rest of the performance leaves me wondering if something is wrong. Is someone forcing her to continue? Is it prudent for her to continue at this juncture?

As for the winner Carolina Kostner... I called Aunt Joyce on Friday. I had not yet seen the short program, but I had skimmed the summary on isu.org. I asked, "Did I read correctly that the leader in the ladies competition completed a 3 toe-2 toe combination?" Aunt Joyce replied, "Yes." I think there was laughter because there was nothing else to say. The meaning of Kostner's underwhelming victory at NHK can be summarized in Carolina's own words after the short program: "I'm just happy to be here."
Posted by OlympicEffect at 11:11 PM