Greetings everyone, this is Tarasova's Mink. Aunt Joyce is having me cover the Slow Dance at Skate Canada. Read at your own risk.
This evening we bore witness to the fine dancers at Skate Canada. Leading the pack by .01 is the sibling pair of Sinead Kerr & John Kerr with a score of 62.96. Right behind them is Canada’s Vanessa Crone & Paul Poirier, followed by Pernelle Carron & Lloyd Jones of France with a 54.43. 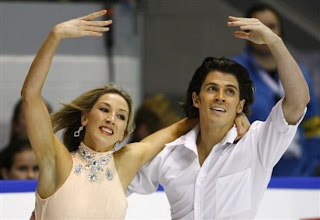 It was a delightful night of disappointing musical cuts and dragtastic costumes.  The evening’s festivities began with the Canadian team of Sarah Arnold & Justin Trojek. Decked out in the colors of Switzerland and candy canes, we were feeling neither neutral nor full of season's greetings about this team. Sarah seems to have missed the memo that all dancers are required to grab their skate blade during the twizzles in order to achieve credit for maximum difficulty. Despite this, blade-grab-free Sarah still manages to make those twizzles look effortful and rather difficult. No doubt that they are. Partner Justin, looking ready to go for his afternoon shift at Neiman Marcus, is slightly more successful in keeping hand locked onto blade. 40.07 sends them into eighth place out of nine teams.
Next up are Stefanie Frohberg & Tim Giesen of Germany. WestPalmBitch asks the eternal question one must always ask of German skaters: Where’s the lederhosen? For their Short Dance, Stefanie is portraying a doll. Or a mannequin. Or a mannequin-doll. Skating to an amalgamation of music that should make Kemp & King feel less bad for selecting an orchestral tribute to “Clocks,” our lederhosen-free Germans move at a glacial pace that is most conducive to confusing the actual performance with that of the slo-mo replay. It is not until the audience begins applauding that we realize we are, in fact, watching the live feed and not the playback footage. WestPalmBitch informs me that Terry Gannon, who is that much closer to God than the rest of us wee folk and thus we should listen when he speaks, is none too impressed. 43.00 for Frohberg & Giesen.
The crowd erupts as Alexandra Paul & Mitchell Islam, the reigning World Junior Silver Medalists, take to the ice. In case the “crowd erupts” part didn’t make it clear, Paul & Islam are Canadian. Skating in Canada, in case I wasn’t clear about that part either or if you wandered in from NHK and wondered why you had yet to see any anime and/or Hello Kitty references. Paul & Mitchell’s tango is quite fierce for such a youthful-looking team. 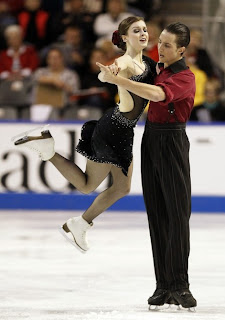 The cuts are reminiscent of Marlie’s Piazzolla OD tango, and thus far, P/I’s dance is by far the most enjoyable. Coincidence that it also most resembles an OD? I think not. The team has more (dare I say it?) connection than that of the teams before them. That said, there appears to be a bobble during the golden waltz, and the twizzles are even less successful. My biggest concern, however, is Tessa Virtue popularizing the vampire look among young female Canadian ice dancers. But no matter, as P/I distract us with a sassy, sexy edge-slide that sends ice flying everywhere. Mary Scotvold would approve. WestPalmBitch takes this moment to mourn the absence of the Scotvolds. We both miss the sexiness of their edges and Mary’s penchant for chain smoking. (Meanwhile, I'm sure Mark Militano misses the easy paycheck every time Mary commissioned him to compose a "new" song for Nancy to sexyedge to.) The crowd erupts again as the youthful Canadians score a very edgy, very sexy 50.55.
Following in their footsteps are Rachel Tibbetts & Collin Brubaker of the USA. Collin is indeed the younger brother of Rockne, although many will question whether it is by birth or by adoption. Do not be fooled by the difference of face, as the similarity of hair should be enough evidence to prove they came from the same womb.  Unfortunately Baby Brubaker does not seem to possess the same scoring ability as Brother Rockne, for T/B’s SD to Etta James and Ray Charles scores a 36.88, including a deduction. WestPalmBitch informs me that Tanith is confused. So am I. But then again, I was convinced that Mitchell Islam was also Alexandra Islam until it was otherwise pointed out to me that it was the reverse.
After a zamboni break, we return to the French team of Pernelle Carron & Lloyd Jones. Decked out in Napoleonic-like attire, their red, white and blue creations are most reminiscent of firecracker popsicles. 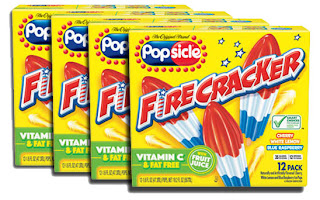 While one might have the urge to lick the very pretty, very blonde Lloyd much the way one would lovingly tongue-caress a popsicle, I remark to WestPalmBitch that his hair is a bit too Maxim Stavisky for my liking. 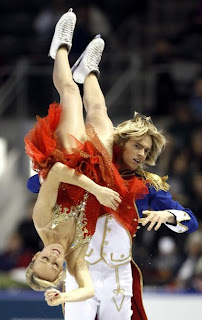 Continuing the theme of “lady is a lifesize doll,” Pernelle assembles her limbs in stiff, doll-like fashion as their music to Jacques Brel begins. You know, folks, Coppelia ain’t that great. No matter, Pernelle & Lloyd skate with more unison than those before them, to the extent that it makes one wonder just how familiar dear Lloyd is with life-size dolls. For their efforts, C/J are left with a 54.43, and WestPalmBitch is left wondering if Pernelle has always been a natural blonde.
Next up, we have the young Russian team of Kristina Gorshkova & Vitali Butikov. In predictably Russian fashion, their fashion choices are neither subtle nor demure. I approve. At first we are intrigued by the creepy bells. Very Russian. Then annoyed by the overdramatic panflute. Very unRussian. Then we are again intrigued by the haunting strings and accompanying beat. Very Russian. This game of back-and-forth continues as WestPalmBitch remarks on the speed with which the Russians move across the ice. It is at this point where we must reveal ANCIENT RUSSIAN SEKRIT: Beneath Kristina’s voluminous neon skirt is an old car engine, one that has taken many a passenger across the icy tundra and even the Volga on occasion. WestPalmBitch informs me that he has been telling people to gift one to Caroline Zhang, in hopes of improving her speed. Unfortunately, Ms. Zhang appears to have mislaid the directions and instead swallowed said car engine. A 51.56 for our engine-wearing Russians as WestPalmBitch dutifully packages up another and has it overnighted (this time with laminated directions, no less!) to the Zhang household. 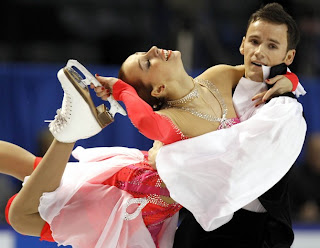 The American team of Madison Chock & Greg Zuerlin then circle the ice. Madison is ready to give us her fiercest French twirl in an equally voluminous, but perhaps more demure, skirt that could likely also fit a car engine in it as well. The engine-free team of C/Z skate to Edith Piaf’s “Milord,” and it is with utter jubilation that we bob along and remember Kristi Yamaguchi’s exhibition from 1992. Things seem to be flowing just fine without Kristi until Madison stalls on their twizzles. It is at this point that WestPalmBitch would like me to point out Gregory’s Level 1 lift. Regardless, the Americans laugh in the face of old Russian automobile parts as they outscore G/B to the tune of 54.19. 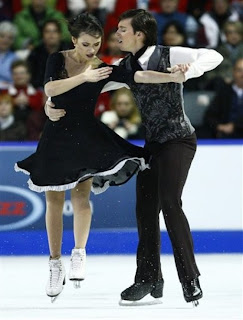 Canada’s prettiest male skater, Paul Poirier, and his partner Vanessa Crone follow C/Z. In the most convincing recreation of “Dancing With The Stars” yet, Paul and Vanessa (who shall henceforth be referred to in that order, because let’s face it: the prettier one always goes first) skate to a version of “Fallin’” that is not sung by Alicia Keys, all while wearing a ballroom-styled set of outfits: him in a tuxedo and her in a white evening gown. We are only slightly distracted by the thing camped out on Vanessa’s head, but mainly we are distracted by the unearthly beauty of Paul and the fact that Aunt Joyce thinks Vanessa is dressed like a Mormon bride. It is not enough, however, to make us overlook the sheer strangeness of their costuming and music choice. The pretty one looks rather stiff during the twizzles, but overall one is not surprised that they score a 62.95 and take the lead. 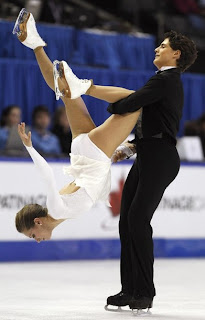 The final skaters of the night are the sibling duo of John Kerr and Sinead Kerr. They open with the GW to “At Last” and then transition to… The Ting Tings. This musical schizophrenia is rather entertaining, much like Sally Field’s performance as schizophrenic in the moving television film “Sybill.” However, unlike Sybill, Sinead and John seem to have a very loving, stable family that allows us to enjoy their mishmash SD without finding the fact that they are a sibling pair particularly icky or incestuous. They score a 62.96, and somewhere backstage the pretty one is plotting revenge.
Posted by OlympicEffect at 8:44 PM