Notes on a Grand Prix 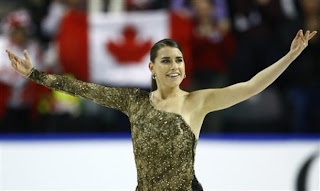 Cynthia "Phanny The Manny" Phaneuf is leading after the short program with a triple toe as her solo jump.  Genius.  Even better?  I picked her for my fantasy.  I anticipated some Skate Canada bonus and got my money's worth.  You know it is some field with Draggy Delight is leading.  Why are all French Canadian women SO butch?!  Even JoRo rocked the man shoulders.  Cynthia has good edges, strong skating skills and one firm jaw on her.  Tarasova's Mink finds that Cynthia only accentuates her masculinity by attempting feminine programs.  Her jumps were gigantic and her program was decent.  Let's not get ahead of ourselves, it isn't like this program eclipsed any score ever earned by Ashley Wagner.  It appears that she will be Canada's new Jennifer Robinson, as JoRo just committed to the full Stars On Ice tour.


Agnes Zawadzki would be impressing Martha Karolyi with her competitive mettle if she gave a shit about figure skating.  Her jumps are Kerrigan-esque and her presence is improving on the ice.  Then again, it would difficult not to notice her with that dress she has on.  It is certainly attention grabbing.  Agnes' Polish thighs and Eastern European ruthlessness are putting her in good stead for the free skate.  Her speed could always improve, but we can only hope she'll switch coaches and work on it by the time she's throwing Triple Lutz+Triple Toes.  Jody Flatt must be freaking out about Rachael's chances defending her National Title right about now, which means the rest of us are loving every minute of it.

With the killer instinct required to win international titles, there is no such thing as a strong competitor who is a nice person.  By those standards, Alissa Czisny must be Mother Theresa.  Given that this is Skate Canada, Alissa's short program was delicate and splat free, but she didn't attack her way into the top three.  With her superb spins and gorgeous line, she belongs in the top three.  Her jump technique actually looked somewhat improved here, but one never knows what to expect from the former National Champion.  I'm impressed that Tara Lipinski remembers which jumps Alissa missed at Nationals, because they all do blend together after a while.  Tara must be as OCD with her note taking as she was practicing triple-triples.

It is a good thing that Alexe Gilles is pretty, because I'd worry for her mental state otherwise.  The last time any of us saw her deliver a worthy program was back during 2009 Nationals.  Tarasova's Mink asked me if I thought these would be the last Grand Prix assignments Alexe will ever be given.  Frankly, I'm shocked she even got any this year after popping every jump at last year's Skate America.  Alexe has bizarre arms and shoulders on her jumps.  She can't blame it all on being tall, because Agnes isn't exactly  a short girl.

Ksenia Makarova is making the most of the time she has before those pesky Russian juniors emerge to steal her thunder.  It is time for her to add in the harder triples and combinations she trains, because it just isn't going to cut it.  Gorgeous skater.  Love her.  Time to bring the big jumps.

Haruka Imai deserves mention for being a good fantasy pick.

On the pairs side, Castelli and Shnapir may have been one of my greatest picks to date.  I was obviously making the Meryl Davis---looks like she's from Avatar connection when I made my selection.  Tarasova's Mink is worried that the six Canadians will gang up on Brittney Simpson by distracting Nathan Miller with a keg of Guinness.

My pairs picks are currently 1-2-4 and my ladies picks are 1-3-6.  Down with Gaysian Attorney!  I am determined after falling behind last week.

God Bless Iliushechkina and Maisuradze.  I will gladly be copying and pasting their names from this day onward.

Quotes of the Day: "And that pair girl's Triple Lutz was shameful.  Don't show off what you don't got."

"What would your reaction be if Rachael Flatt took up pairs with Nathan?  Their legline would be uniform at least."
Posted by OlympicEffect at 1:36 PM