“I don’t get why the ISU is having everyone mix golden waltzes with tangos. It es confundido para mi.” – Aunt Joyce, during coverage of the NHK Trophy Short Dances 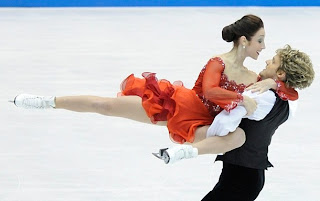 This is Tarasova’s Mink reliving the Short Dance (which I have the overwhelming urge to call the Slow Dance) after having watched with Aunt Joyce, Margaret Thatcher and Westpalmbitch. I should warn you all that this entry is likely to be much longer than any subsequent ones I pen. Mainly because for the rest of NHK, I’m unlikely to be watching with any of the aforementioned and will only be able to rely on the voices in my head for additional commentary. Also, because I'd like to think I have a life. By not spending as much time as I did on this entry, perhaps I shall be able to fool myself into thinking this to be true.
**Before we begin, Aunt Joyce wants the world to know how much he misses the amazing Tanith Belbin.** 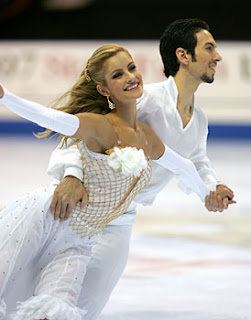 Now then, away we go, report is after the cut:


We open with the Hungarian team of Dora Turoczi/Balazs Major. Of note is the fact that they are the first team to skate the Short Dance, and the fact that her skirt is culled from the same material used to make my mom a bouquet of tissue-paper flowers when I was in preschool. We used green pipe cleaners for the stems and painted juice cans for the vase. Thank you, Dora and Balazs for that trip down memory lane. Sadly neither video nor photo can be found of said dress or said team.
Although my ears perk up during their transition to Sing, Sing, Sing (I’m easy to please, what can I say?), I cannot say the energy level in their skating does as they seem to lack the speed and attack to match Louis Prima note-for-note. A 32.68 puts them temporarily into the lead.
As the Chinese team of Xiaoyang Yu/Chen Wang takes to the ice, Aunt Joyce squeals with delight at the sight of the Cat Dancers. At Aunt Joyce’s insistence, the pair shall henceforth be referred to as Cat Dancers, but only with the utmost respect and reverence, of course. The opening bars of their SD begin, and already it brings back bad memories, yet I’m unsure why. Aunt Joyce reminds me that the music is Blue Danube and was used by Kristi Yamguchi for her ’92 SP. Aunt Joyce adds that this cut is worse, and it’s not very blue, however. No, that can’t be it. With no assistance, the repressed memories come flooding back: Kavaguti/Smirnov. Except there’s no Smirnov in tight lycra to distract the judges from the potential atrocities on ice. To be fair, neither Cat Dancer looks like their shoulder will dissociate itself from the rest of their bodies.
Aunt Joyce remarks on Cat Dancers performing the pattern first and wants to know when will the ISU get over the golden waltz. “Do they wanna bring up memories of Pasha two-footing her dip?” Joyce asks.
I’m too entranced by what a wild ride the Cat Dancers’ twizzles were. I’m also wondering if anyone else felt as if the sections featured in slow-mo constitute domestic abuse? There was some definite assault and battery in that choreography. Cat Dancers receive 43.50.
The team of Coomes/Buckland take to the ice. Oh, Elena Sokolova has resurfaced as a British ice dancer, I remark. No, Coomes clearly has never had a cupcake before, Aunt Joyce replies. A rather lovely lift that draws applause from the audience is worth pointing out, but otherwise I shan’t dwell too long on this particular incarnation of Tango De Roxanne. 43.52 for Coomes/Buckland. 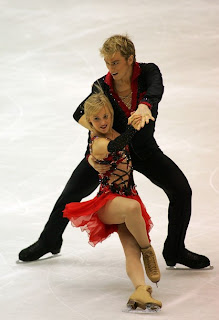 While we wait for the Reeds to take to the ice, Aunt Joyce, ever the wizened veteran, brings the conversation back to its appropriate place — the international nature of the figure skating community and its larger implications: “I love how Evgeny is the national coach of Great Britain. Like Morosov is for Japan. And Orser was for Korea.” 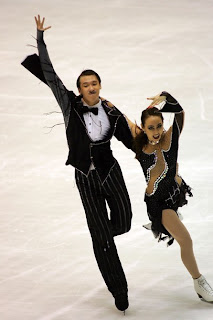 Then the Reeds take to the ice, with Sister Cathy looking rather Krylovaesque. Aunt Joyce says she looks like an Addams Family member. Brother Chris has a most fascinating 'stache. It is almost as prominent as Mirela Pasca's. While I shall spare you kind folk from any tired "ice-dancing siblings = incest" jokes, it dawns on me. Aren't Chris and Cathy the names of the older brother and sister in "Flowers In The Attic"? You know to what I'm referring. That delightfully campy V.C. Andrews novel and subsequent film about children kept locked in their grandmother's attic. I'm just sayin', yo. Then the music begins. As the Dollengangers, excuse me, I mean the Reeds skate their program, I can’t help but think of dear old Krisztina Czako and wonder what her choreographer (her father?) is up to these days. Czako rocked The Addams Family like no other. RECOGNIZE! As I am still upset neither Margaret, nor Westpalmbitch, nor Joyce chimed in to agree, I’m taking this moment to relive the brilliance of Czako’s Addams Family LP:
As we return to 2010, Morticia and Gomez score 44.90, and at last we have the senior GP debut of Elena Ilinykh/Nikita Katsalapov, who of course are the reigning World Junior Champions and the reigning JGPF Champions from Russia.
Everyone agrees on how attractive this pair is. Elena looks a bit like Mila Kunis, and Aunt Joyce seems to think Nikita looks positively Jeff Buttleish. There are skategasms all around as Aunt Joyce remarks on the fact that they learned to twizzle. “Es un miralgo,” Joyce declares, although he is less enamored of this particular routine, feeling that it isn’t inspired. Elena is clearly the star of this team. She is downright possessed in her commitment to performance. Although Nikita is certainly in no danger of entering Maurizio Margaglio territory, it’s clear he sometimes loses the character of the dance. And then a slight stumble from him. Despite the error, it’s clear I/K aren’t about to rest on their junior laurels. 56.89.
Following some quality Zamboni time, the Czech team of Lucie Mysliveckova/Matej Novak skate. Matej and Lucie (clad in a dress from the Maia Usova Lillehammer FD F/W ’94 collection) score 45.20, thereby messing up Margaret Thatcher’s Fantasy Skating Team. 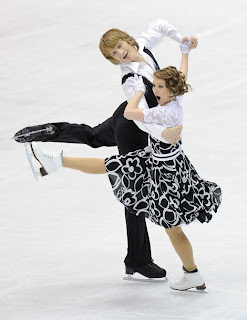 The Shibutanis take to the ice in their senior GP debut. There are ’gams over the unison and speed in their twizzles, while Margaret points out that he hates the over analysis of twizzles. Very true, my friend. Alex and Maia are generally a delight, and the much-debated height differential is less noticeable in this dance until the two fall during a step sequence. Aunt Joyce reiterates how, with their deep edges, these two are total Virtue/Moir clones (Get well, soon Tessa!).
As the clones spring back into action, we notice Maia’s dress unraveling post-fall. It’s like he got caught in her lederhosen! How very Weidermann twins of them. You know what this means! Moseley/Dorsey are going to Albertville. Or in this case, were there any doubt before, they will definitely not surpass Elena/Nikita. And before we leave the early 90s behind until the next “Cutting Edge” callback, Aunt Joyce remarks that the dress malfunction is so very Katia Gordeeva at ’93 Skate Canada. I thought there was a compelling argument for it being a very “Tonya Harding at ’93 U.S. Nationals” moment, but there you go. Westpalmbitch is kind enough to indulge my love of “The Cutting Edge,” and shouts “TOE PICK” as the Shibutanis receive their score of 53.68, which is including the deduction for the fall. Aunt Joyce says he needs to take five film classes just to text me, but I feel no guilt over having "The Cutting Edge" memorized line-for-line.
Next up is, as Margaret Thatcher puts it, is Kaitlyn “clearly Canadian” Weaver (Do you remember those drinks? Delightfully clear and deliciously fruit-flavored) and “he’s so pretty” Andrew Poje. Kaitlyn is clearly a fan of Amber Corwin’s “Moon River” SP, and in the spirit of that program, this team shall henceforth be referred to as Amber and Andrew. 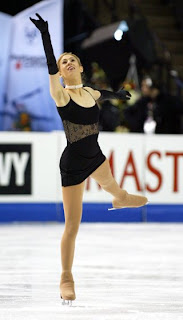 The control A/A they demonstrate in their skating is to be appreciated, although at times Amber’s occasionally stiff movements and posture could use some improvement. None of us seem particularly thrilled with their choice of music, “At Last” and “Cheek to Cheek.” Everyone else seems shocked that Amber/Andrew score a 58.69, thus placing them ahead of I/K, but it must be pointed out that Nikita did have the slight stumble during their tango.
The “hottest ice dancer of the competition” award seems to belong to Luca Lanotte (with Andrew Poje a close second) as he and Anna Cappellini take to the ice, in what can only be described as The Most Homosexual Short Dance of the Evening. 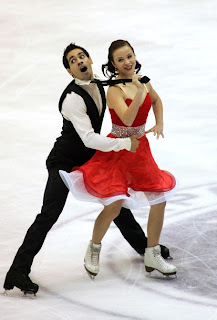 Skating to Doris Day’s “Que Sera, Sera,” this SD doesn’t get any less gay as the music transitions to “Girls, Girls, Girls” and Anna appears to, once again, error on the twizzles.
Westpalmbitch questions the appropriateness of their lift, while Aunt Joyce wonders if Anna is the new Mattie Larson, as he recalls her messing up the twizzles at Worlds and crying about it. Let’s focus on happier things, shall we? Like the hotness of their French coach, who Westpalmbitch tells us is Romain Haguenauer. In what might be the prettiest kiss’n’cry threesome ever, Anna, Luca and Romain Hottienauer wait for their scores. Although I wouldn't call it exceptional, per se, that was an Exceptionally Gay Moment. 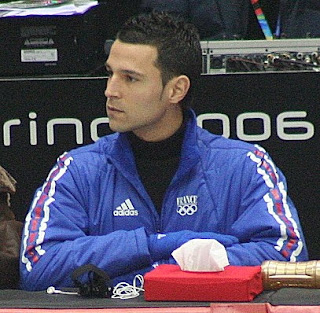 A 55.68 places them in 3rd, with Marlie to skate.
Davis/White begin their SD, with both looking more mature than before. Meryl, in particular, receives raves for looking gorgeous in a red dress that does wonders for her legline. Together, they receive raves for their twizzles (and the timing of the hop right before it) and the flow of the step sequence right after. Westpalmbitch says they look regal. The judges seem to agree, scoring them a 66.97. We must remember that this is their second SD program, which makes this performance (to "La Boheme" and "La Traviata") all the more impressive. Truly an Exceptional Gay Moment.
As we bask in the glow of Marlie's GP SD debut, one wonders what kind of showdown will await us at Worlds, should Virtue/Moir also be in attendance.
Westpalmbitch: What if, like, Tessa shows up at Worlds randomly and wins? Will there be a catfight?
Aunt Joyce: Meryl's bitch will come out.
Westpalmbitch: I'd live for one.
Aunt Joyce: She will start screwing Pelletier.
Westpalmbitch: LMAO.
Aunt Joyce: And Jamie Sale will be there. With Theo.
Westpalmbitch: I really would like to see Meryl scratch her shins.