The Wonderful World of Ice Dance 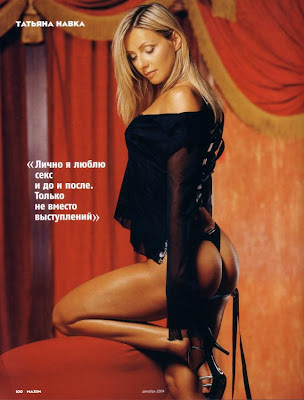 Ice Dance was a fabulous discipline before there were rules. Winning medals was determined based on whether or not you were from Moscow or bought Tarasova a brand new fur for Christmas. In 2003, Tatiana Navka was NOT pleased to have lost out on a bronze medal at Worlds. The Russians did not bribe enough judges to make up for the randomized scores that counted. It was complete bullshit in the eyes of our grand diva. Navka had never been so hurt. The freakin lights were turned off during her free dance in Nagano and now she had to come to the US of fucking A for a little more bullshit. To make matters worse, her former husband got the judges to finally reward his floozie of the week with a World Title. It may have been a "get the gold and leave!" medal, but that Canadian Bitch would be able to call herself a World Champion for all of eternity. As much as one would like to feel badly for Tatiana, one cannot help but be amused by her openly pissed off reaction in the Kiss and Cry. Mother Russia never bothered to teach their athletes about "sportsmanship." One can only imagine how a Russian Academy Awards would go down. There would be no fake congratulatory smiles to go around. How about a nice middle finger for the camera?! Ya, that's how I feel about fourth place too.

Posted by OlympicEffect at 9:05 PM