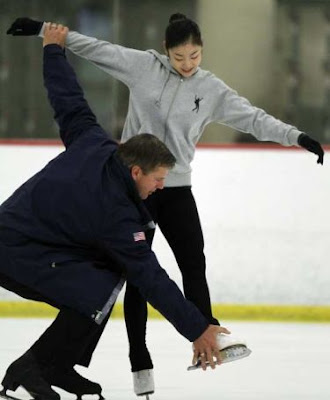 Yu-Na Kim selected Peter Oppegard as her coach yesterday. This has caused internet hysteria that she will not compete again. Orser served as Yu-Na's main coach, but he was not her jump coach in Toronto. Oppegard could very well serve the same role, with jump help coming from other places if needed. Arutunian is in close proximity and could likely work with Yu-Na on her jumps. Oppegard is a very successful pairs coach, which means that he knows all about positioning and creating a picture on the ice. As a choreographer, he can really aid Yu-Na's ability to emote, expand her range of movement and polish her skating. When I saw the photo of him correcting her foot position, I was giddy with excitement. The Olympic Champion displays a strong affinity for the feminine boys. View a photo album of them working together. Oppegard previously taught Kim her double axel. They have not discussed her competition plans, but she remains steadfast that she will compete at Worlds. Yu-Na is in decent shape and has been running through her new programs at the East West Ice Palace.


Macko Caquatto won the AA Day 1 of camp. There is another day of competition, but this bodes well for her shot at making the team. Unfortunately, it indicates the relative weakness of the team overall. Rebecca Bross has been dealing with her foot/ankle issue and only competed two events. Almost everyone hit during yesterday's verification. Bridget Sloan competed AA but finished last, indicating that she fell and/or watered down. Cassie Whitcomb's injury is apparently aggravated. Raisman and Hunter both hit all events. The team will be announced at 7 PM tonight on UniversalSports.com.

Nastia Liukin tweeted a photo of her bar grips today. Her comeback is a long shot, but she does appear to be somewhat serious about getting back into form. She plans to make a decision by the end of the year.

Jeremy Abbott told Icenetwork about his ongoing boot problems. He has not been training well for a month. This could either cause him to rise to the situation and be distracted from the psychological pressure of competition, or it could cause him to panic and feel unprepared for NHK in two weeks. Jeremy's psyche in a box of chocolates, you never know what you're gonna get.

KJC spoke to Gymnastike about her favorite floor routines.

Lauren Mitchell won the AA at the Commonwealth Games. Team Aussie won gold in both the men's and women's team competitions.

Evan Lysacek posed nude for the ESPN Magazine Body Issue. It is a rather nice photo of him ;)

Olivia Yao qualified for Junior Nationals in the Intermediate Division. Michael Quadrino earned the silver medal among the Senior Men of the Northeast Region. Christine Mozer won Junior Ladies.
Posted by OlympicEffect at 11:47 AM