A Word With Mariana Bitang 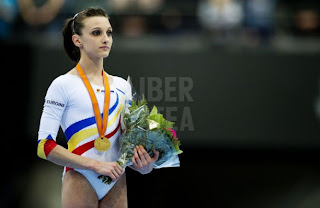 The lovely Ioana has graciously translated interviews with Mrs. Octavian Belu.  Mariana Bitang is definitely back in charge, as the hallmarks of all Belu and Bitang interviews are beginning to re-emerge.

Libertatea: Pleased with the girls' results?
MB: I'm very happy for the two medals, but especially for Ana. Her success is all the more valuable since we had very little time to prepare for this event. [i.e. the real preparation only started when B&B came back]

L: Before Worlds, you were reserved about medal chances...
MB: We did not want to pressure the girls. Besides, we had been away from the gym for a while and the girls alll came back after serious injuries. Ana was in a cast for 3 months. She really wanted to compete on all events and -fortunately- her leg held out. If she'd prepare very well, she could be among the best at the 2012 London Olympics.

L: Could we count on Izbaşa for London?
MB: She's only 20 years old. If you take a look at the vault champion, Alicia Sacramone or uneven bar champ Beth Tweddle, they're 23 and 25 respectively. I hope the mishap from Worlds (7th place on floor) would motivate Sandra to keep going.

L: Do you think Izbaşa made a mistake before the competition when she said in an interview that she does not hope to medal?
MB: On the contrary. She made a mistake because she wanted it too much. She had a very serious injury and the important thing was competing [again].

L: The girls had clean routines, but lost due to [lack of] difficulty
MB: The COP was changed and it's true that the difficulty of a routine counts more than execution. It's good we saw where we stand right now.


A few quotes from GS:
Ana on the first World gold medal for Romania in 9 years. "I can't find the words; the medal's is amazing. But when they play the national anthem, you think about the work behind it. When you struggle, when you work in the gym, when it's very difficult, when you can't go on, you think about moments like these and get over everything a lot easier."
What's next for her? "My future will be almost the same, in the gym, a lot more work."

Sandra Izbasa the floor Olympic champion cried in Rotterdam. And they were not happy tears. After stepping out of bounds twice in her routine, she finished 7h with 13.983 pts, missing the one gold medal she's missing from her collection."She wanted it very much, but that's what happens when you want it to much. Had she done the same routine as in qualifying she'd be a World champion. We will see it this failure will motivate or demoralize her," said Bitang

Ana "I've been waiting for this moment for a very long time. My biggest dream is an Olympic medal, but this title is also a dream. This medal will give more confidence."

"Mrs Bitang will probably congratulate me, but the beam routine was not perfect, so I expect some admonishments because this could have been even better. I did better [on beam] in the all around."

"From my point of view, Worlds went well. From the moment I got here, I wanted to go through all routines without any falls. I did and perhaps that makes me happiest."

Bitang: "They are medals that will give them confidence. It's hard to get on top, but even harder to stay there. They need to be conscious that they need to keep progressing even on the events they won medals"
Posted by OlympicEffect at 7:32 AM