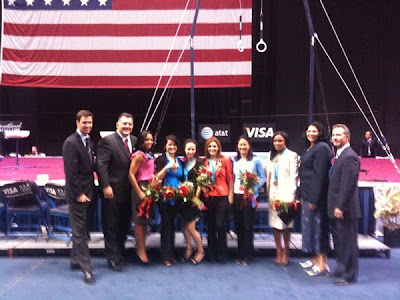 The 2000 Team was awarded their bronze medals. Apparently Dawes put her medal around Kelli Hill's neck and the waterworks flowed. Because you know, they've won an Olympic Medal together before. Dawes' five-month comeback was such a long and emotional journey for the couple. 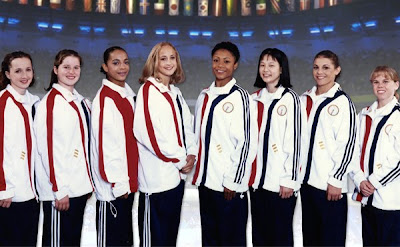 What is fabulous about the 2000 team is that they had more attitude than any other Olympic Team is history. Of the competing team, Amy Chow is the only ''nice'' girl on the team. I wouldn't mess with any of the other five. In the words of Dick Button, "don't shake her hand, she'll break it."
Dominique Dawes stole the show with her random tearful comments about Kelli Hill. I wonder what Shannon was doing during the ceremony. Dawes made the press conference all about herself and her new weave. As the veteran of the team, she spent all of five minutes training for Sydney. Where was Bela during the ceremony?
Elise Ray with her bronze medal.
Jancy Thompson is suing USA Swimming and Norman Havercroft for sexual assault that took place over a five-year period in the '90s that started when she was 15. USA Swimming allegedly knew of the abuse and attempted to cover it up. The suit claims that Havercroft abused another girl, which USA Swimming knew about, but she is not listed in the cast. Havercroft is accused of groping, engaging in sexual acts, providing pornography and buying a webcam for cyber sex. Jancy Thompson recently graduated from the police academy and does gang intervention for a nonprofit group. 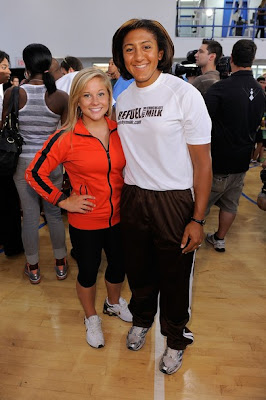 Shawn Johnson's comeback appears more legitimate than previously thought. She was in NYC to appear with Got Milk? today, but was only on the ground for a few hours before returning. Shawn told the Des Moines Register that her training is more like cross-country training than gymnastics training, as she attempts to get her body back into shape. She is hoping to get her skills back by the end of the year and be back in competition by next year's National Championships. Shawn looked surprisingly thinner at the Got Milk? event. Perhaps we shouldn't bet against this natural talent, as she is definitely someone who could defy the odds.
Live scores for Senior Men's Prelims
Quick Hits
Kevin Tan was apparently injured during the second rotation and had to be helped off the podium. He later continued competition on the pommel horse and then fell on his rings dismount after a solid routine. Reports indicate that he looks too injured to be competing. Orozco was helped off the podium moments ago after a bad landing on vault.
Gymnstands has the best quick hits on twitter. They are more realistic, as opposed t0 Gymnastike, which gets all excited over Horton's 13.95 on Pommel Horse. Let's celebrate mediocrity!
Posted by OlympicEffect at 4:33 PM