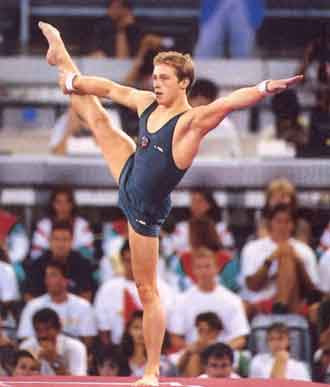 A friend recently sent me a download link for the 1992 Moscow World Stars. In short, it is Holy Russian Fabulousness. This meet took place around February/March in 1992 and featured most of the top Soviets. Of course, my girl Natalia Kalinina finished third here but isn't shown. She was later left off the Olympic Team. Given the lack of video available later year, it remains unsure whether it was due to performance or political reasons (they had initially tried to leave her off the '91 World Team but the Ukrainian Federation said they wouldn't allow Gutsu or Lysenko to compete if she was. Kalinina had supposedly made controversial statements about enjoying her time in the states.)
This meet displays everything that was kick ass about the Soviets. Gutsu does a full twisting double layout off bars, mounts with a stuck split legged double layout on floor and dismounts with a stuck double layout. Galieva rocks a piked full twisting double back off beam. Baby Khorkina and Kochetkova amaze. The Soviets weren't known for being the World's best bar workers, but the '91-'92 team certainly rocked the event.
As for the Soviet men, they all could've done porn. And then there's their fabulous gymnastics.
Note: Lori Strong looks like she may have eaten Roza Galieva at this competition. It goes to show just how tiny those Fierce Kommie bitches actually were.
The file is big, but worth it. The video quality is spectacular.
Men's Results
Women's Results
Posted by OlympicEffect at 1:13 PM