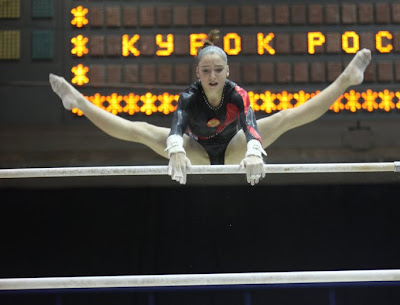 Aliya Mustafina retained her Russian Cup crown and Ksenia Afanasyeva finished second for the second year in a row. The Russian Cup used a scoring system with bonus points added for innovation, so the scoring is not relevant to what they will be scoring at worlds. Ksenia Semenova was third. Tatiana Nabieva dropped in the standings due to a disastrous beam routine.
Teng Haibin won the qualifying round in Zhouzhou at Chinese Nationals. Zou Kai was the top qualified on floor (15.850) and high bar (15.900/ 7.5 D score). Chen Yibing was third AA after being plagued by a foot injury for the last several years. He revealed that the injury is still bothering him, but he remains king of the still rings.
Tim McNeill is taking over as the Head Coach of Cal's Men's Gymnastics Team. This is a huge opportunity for McNeill and Cal, which has been plagued by serious fundraising issues. McNeill has a large task ahead of him with regards to fundraising and recruiting for a team that is in jeopardy of not being around in a year. What hasn't been discussed is Tim McNeill's elite plans. While no word on them (he was out this summer due to a grave family situation), he spent the time working as the interim coach at Cal and will likely plan on continuing; however, given the gravity of the situation at Cal and the time and energy required to be a head coach, it is unlikely that McNeill will be able to train at the level necessary to make an Olympic Team. There are only so many hours in the day, and it is almost unthinkable that he'd be able to train enough and devote enough time to a head coach's responsibilities in and out of the gym. This is especially significant given his strength on Pommel Horse, the weakness of the American men on horse, and his overall strength in the all-around.
David Wilson said that he was unaware that Orser would reveal Kim's music during his interviews. While AT Sports is using terms like "outraged and flabbergasted," his statement appears to be rather matter of fact, with slight annoyance. Wilson works with a myriad of skaters, most of whom have revealed their music for the upcoming season. While it was certainly an error on Orser's part, it was unlikely intended to"hurt the skater" as AT Sports claims. Yu-Na's long program to "Arirang" is now the most highly anticipated program of the season, easily eclipsing anything Marlie or Voir will do. There is increasing speculation that Orser's decision to work with Japanese junior skaters this summer contributed to his fraying relationship with Team Kim.
Denney and Barrett are at champs camp this week but will be visited by choreographer David Wilson when they return. Being coached by Zimmerman and Fontana could certainly help their styling and packaging, but medal hopes likely remain just that.
Stephen Carriere will not be skating at Champs Camp this week due to having a cyst removed. He is currently in a boot but will be back on the ice in about a week. Mirai Nagasu will also not be skating. We knew that she was injured when she had to pull out of The Ice, but her injury was not disclosed. Mirai has been off the ice for six weeks due to a stress fracture in her foot and appears quite impressed with her tan. She is eager to return to the ice on September 1st and knows that Frank Carroll will be kicking her ass into gear.
Felicia Zhang officially passed her senior test at Champs Camp. Felicia and Taylor spent last week working with Elena Valova, who is one of Taylor's first coaches. They are actively seeking to add some Russian influence to their skating in order to become a top pair.
Wu Jiani spoke to Gymnastike about Anna Li's elite aspirations. Her blunt demeanor and sense of humor is refreshing. She may just be the Chinese Caroline Manzo. Kelli Hill, who is blunt in a more intimidating way, spoke to Gymnastike about Kytra's bubble position for the World Team selection. Her fear of overrotating easier tumbling passes could be interesting when it comes to designing her collegiate routines.
Adopted Daughter Nina Jiang is in third after the short at the JCP in Courchevel. Yasmin Siraj is in sixth. Polina Shelepen is second behind Yretha Silete of France. Jiang actually had the highest PCS scores...which is a definitely bitchslap to the Russians who assume vast superiority in that area. Max Aaron and Jason Brown are second and third behind Canadian Andrei Rogozine in the men's event.
Posted by OlympicEffect at 11:14 AM