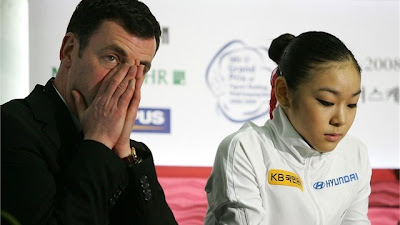 The Orser-Kim drama is not stopping, and frankly...pass the popcorn! After being contacted about being called a liar by Yu-Na and AT Sports, Brian Orser provided Phil Hersh with a copy of an email he sent to Yu-Na on April 25th about the rumors surrounding him being contacted about coaching Mao Asada. This comes on the heels of another report from The Star stating that Yu-Na was seen in tears at the Toronto Cricket, Skating and Curling Club and left before taking the ice for her afternoon session.
We also learned that Yu-Na's new competitive long program is set to the music of Arirang.
The Qualifying competition took place at the Russian Cup. Aliya Mustafina led the field with a 59.821. Tatiana Nabieva was second with a 59.151. Ksenia Semenova was third, Daria Elizarova was fourth and Ksenia Afanasyeva was fifth after mistakes on bars and beam. Afanasyeva performed a double layout and two whips through to a triple twist for a 15.700 on floor exercise. Mustafina and Nabieva both competed Amanars on vault.
Anna Pavlova finished sixth in qualifying and tied Nabieva for the high score on balance beam (14.500). She announced that 2010 will be her final year competing.
Both Viktoria Komova and Anastasia Grishina sat out this meet. The Russians are reportedly aiming to keep their juniors fresh and healthy for 2012. They aim to win gold as a team at Worlds.
A list of the competitors for this weekend's Moran Memorial has been posted.
The top skaters in the country are arriving in Colorado Springs for Champs Camp. Unlike previous years, this year's camp will feature more than meetings and seminars. Skaters will perform their competitive programs for a monitoring committee.
Posted by OlympicEffect at 11:52 PM