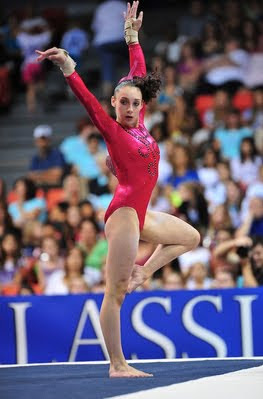 Cassie Whitcomb broke her leg while practice a 2 1/2 Twist+Layout Front on a dead floor at CGA. Understandably, MLT has done her best to keep the injury quiet. This is the third injured elite within two months at CGA. MLT only coaches six gymnasts (she only coaches elites), so that is not a great rate...even for elite gymnastics. Cassie may or may not go to the selection camp to do bars, but it is unlikely that she'd be chosen. Martha generally does not take injured athletes unless they are adding a full point or so on Uneven Bars, as she likes to forget that she petitioned both Betty Okino and Dominique Moceanu onto Olympic Teams with much success. There is speculation that Whitcomb will switch to a gym where her mother coaches in Kentucky. It is unclear whether this will be the end of her elite career.
Ksenia Makarova won the short program at the Moran Memorial with a clean program. She performed a Triple Toe+Triple Toe, Triple Flip and a Double Axel.
Polina Shelepen is off to another strong JGP season after winning the Courchevel event with a long program that featured seven triple jumps. Yasmin Siraj moved up to second place after skating a program with five triples. Nina Jiang finished in fifth place after popping a triple loop and falling on her opening triple flip, which is a new jump for her. Her PCS were extremely high and she beat all but Siraj on the second mark. Nina did attempt a Triple Toe+Triple Toe in the short, but the second jump was underrotated. After only including the Triple Toe and Triple Salchow in her programs at the 2010 Nationals, Nina has made vast upgrades to her technical content over the spring and summer.
Short Program Protocol
Free Skate Protocol
Alissa Czisny claims that Yuka and Jason have completely changed her jump technique (how many people has she claimed have done that now?) She has two new programs. The real question is whether or not she underwent a lobotomy during the offseason.
Jeremy Abbott had his short program reworked last week. He says it is like a new half-program. Hopefully, some of his arm movements and facial expressions have been reigned in.
Marlie announced that their new whimsical Amelie program allows them to show off a whole other aspect of their skating. Lynn Rutherford posted several tidbits from Champs Camp.
Steliana Nistor was asked to join the Romanian National Team at a recent training camp, but the former fugly champion only lasted a week. She wanted to compete two events, but her hand and back problems resurfaced.
Maia Shibutani grew at least two inches since Junior Worlds. The siblings made a point to repeatedly mention this to reporters because there has been increasing buzz that their future seemed hopeless due to their inordinate height difference.
Kristal Uzelac is claiming that she is training again. There has been talk for quite some time that she has been training, but she said she backed off. It seems that Kristal's interest and training waxes and wanes. Dominique Dawes is quoted extensively in the article and says that she will give her a pep talk when she visits Uzelac's gym on Sunday. Dawes talked up Uzelac emphatically, which obviously has nothing to do with her giving a paid appearance at the gym. Kristal can definitely do bars, but she always tended to choke at the ranch when her best was no longer guaranteed to win.
Posted by OlympicEffect at 8:14 PM