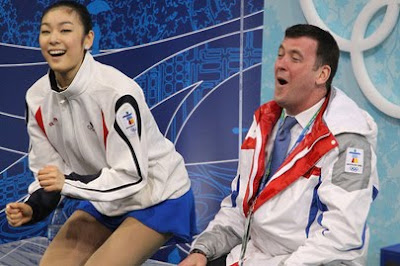 The Yu-Na Kim--Brian Orser---Crazy Ass Park Mi-Hee drama is heating up and I must admit that I'm LIVING for every second of it. If there is one part of skating that we can all agree on, it is that parent-coach-skating coaching drama is off the hook.
Orser has spoken to The Star and Phil Hersh about the situation.
Helen Choi, a representative from AT Sports, has now refuted Orser's statements.
(Somehow, Orser comes across as far more credible.)
Tony Wheeler spoke to an unnamed Canadian source about the split.
Let's look at the players involved:
Brian Orser: Successful coach. Managed Yu-Na's hip and back injuries, fixed her flip technique, led her to Olympic Gold after the pressure looked to be getting the best of her last season.
Yu-Na Kim: Skater. Star. And frankly, a business. Where Yu-Na goes, the money goes with her.
Park Mi-hee: Mother who admittedly writes down all of her successful jumps, missed jumps, falls and pops during every practice session. She moved away from her husband, forgot his birthday and their anniversary and admittedly stifled her other daughter's fabled dreams of being a singer. In other words, she is a fabulous crazy ass Asian skating mother of the first order.
There were two warning signs that shit was about to go down and they were:
1. Rumors surface that Orser has been approached about coaching Mao Asada. Obviously, there is always going to be drama whenever the Japanese Skating Federation is involved. Orser smartly declined and saved himself a lot of gray hair. It is likely that the JSF assumed that Yu-Na's competitive days were over.
2. Yu-Na's mother and her agent (who travel with Yu-Na everywhere) split with IB Sports and form their own agency. While she may have birthed a gold medalist, the entire situation reeks of her being the Korean (and female) Dmitri Moceanu.
We should have known that things were getting good, but everything was kept under wraps over the last few months. What led many to think that Yu-Na was retiring from competition now looks to have been the awkward relationship between Orser and AT Sports.
In Brian Orser's interview with The Star, it is clear that Park Mi-hee is the one making all decisions and likely being influenced by Yu-Na's agent.
Orser has made it very clear that this is not about money. He has only ever charged Yu-Na his standard fee of $110 an hour. (This is much cheaper than Frank Carroll's $140 an hour + %-age of earnings) While he has gained notoriety in Korea and been included in commercials and published an autobiography, there has never been a financial agreement between them and he has never been under contract.
“It was very much a surprise,” said Orser. “There was really no valid reason. I still don’t understand why they did this. I don’t know. It came out of the blue. They sat down with me and Tracy and said we’re not coaching her anymore. And that was that.”

Orser and Wilson got the news from Kim’s mother at a meeting on Aug. 2 — the skater wasn’t present. He said he waited three weeks before issuing a release Tuesday because he thought there might be a change of heart and things could be worked out.

Orser, a former world champion and two-time Olympic silver medalist, found the reasons for their dismissal given by Park Mi-hee rather lame.

“They just felt that we had not given much attention to Yu-na, but at the same time she was kind of talking out of both sides of her mouth.,” he said, “She had told us to move forward with other students.

“We were just waiting to get our orders from the mother because that’s what we always did. She always told us when they were ready to move in a certain direction and we had a meeting and we got pen and paper out and we did a plan. We never got to that point.”

Kim’s management company AT Sports later released a statement saying relations between the skater and coach have been “uncomfortable” since May.

Orser said that’s not the case.

“I spoke with her the other day … She seems confused about what’s going on. Because of all this turmoil with her mother, she doesn’t know what’s going on. Nor do I. That’s what I said to her, ‘I’m a little confused, but it’s been a great four years,’” said Orser.

“We just needed to have a little chat with her before I did this (went public), that the last four years were really magical and we had such a great thing and we support her in whatever direction she wants to go. She wasn’t part of any of these decisions about letting us go.”

Orser said he got the blessing from Kim’s mother to work with other skaters during the summer. Orser said she told him not to make any time for her daughter because they were unsure of their plans for the off-season.

Orser was left out of the loop all summer, including when Kim went off to Korea in July to do some shows. He read on the internet that she was pulling out of the Grand Prix events for this coming season but planned to compete at the world championships.

“I thought it was a little unfair that I had to read it on the internet, that they never consulted with me at all,” he said. “I kind of figured there was something up there.”

He further suspected something when he got a telephone call from former world ice dancing champion Shae-Lynn Bourne telling him that she would be choreographing Kim’s short program this season.

“It’s fine, but I wasn’t consulted on that, either,” said Orser. “I sent numerous emails to both her agents and to Yu-na when they were in Korea in July and I didn’t get one single response back from them.

“I was asking them what’s going on and saying I’m getting some media interest so I need to know what to say. There was literally not a single response, not one ‘Here’s what to say,’ or ‘We’ll talk to you when we get back.’ I even emailed at the end of it: ‘When are you coming back to Toronto?’ There was not even a response there. It was really kind of pathetic.”

Yu-Na has still been skating alone at the Toronto Cricket and Skating Club, but Orser feels that it is now an untenable situation and would likely be best if she left. The other skaters are feeling the tension. Min Jung Kwak is also no longer working with Orser, but it is important to note that she is also managed by AT Sports. Min Jung gained notoriety as being Korea's next promising skater and has been paid to skate in many of her shows. (aka YNK is her meal ticket) Basically, she doesn't have her own leg to stand on, even if she did want to stay with Orser.
There has now been some sort of tweet from Yu-Na, but it is unclear whether she wrote it (or her mother.) As with everything controversial on twitter, they will likely claim that her account was hacked, as it has now been deleted. The broken English is notably fabulous.
@Yunaaa Would you please stop to tell a lie, B? I know exactly what's going on now and this is what I've DECIDED.
In other news:
Adam Rippon gave Ice Network a sneak peak at his costumes for this year. He sounds very excited for the season ahead. While this is not exactly related to the Yu-Na post, it is notable how happy Rippon and Gao seem under Orser and how Yu-Na always seemed. Given the enormous pressure on Yu-Na, he managed her injuries and kept her healthy and sane.
Adam posted photos from a photo shoot on his official site.
New details have emerged about Evgeny Plushenko's eligibility via Ice Network. While no one with a sane mind has expected him to continue competing, his batshit crazy agent is saying that Evgeny still wants to compete and will meet with Alexei Mishin and the Figure Skating Federation of Russia to discuss his plans. Yet, the FSFR is the one who provided the ISU with evidence for forfeiting his eligibility and also spoke in interviews about their strained relationship with Plushenko during his comeback. It is important to note that Plushenko (via batshit crazy agent who 'translated' for Khorkina on The Rosie O'Donnell Show) previously cleared his intention to compete at the 2010 World Championships after the Olympics, but then immediately scheduled shows that prevented him from doing so. As always, there was talk of his poor injured knee, but he was skating again in a week's time.
The entire National Team (minus Va Zam) will be present at the first World Selection Camp. It is important to note that Amanda Jetter has successfully petitioned to the camp.
Ashley Wagner has posted a new vlog.
Always one for attention, child star Dominique Moceanu has posted a montage and video of her speech from her Hall of Fame Induction.
Posted by OlympicEffect at 4:44 PM