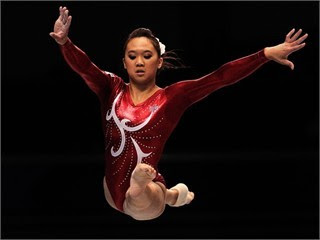 Peng Peng Lee officially withdrew from the Canadian Olympic Trials due to a torn ACL.  This is a huge break for PPL, for Canadian Gymnastics and for the entire gymnastics community.  Peng Peng Lee overcame numerous injuries and odds to become Canada's strongest gymnast.  As a result of her character and perseverance, Peng Peng Lee has been named the Honorary Team Captain.

One interesting aspect becomes when she will be able to have her surgery.  As it is, Peng Peng Lee will likely have to redshirt her freshman year at UCLA.  There is a chance she could be ready on bars for the end of the season, but she needs to be able to have surgery on her ACL.  If she is to get surgery in Canada, she will likely have to wait.  She can get it in the US, but it would be costly for someone who has nationalized medical insurance in another country.  If UCLA picks up the tab for the surgery, PPL may have to wait until the first summer session to have the surgery.

My heart breaks for Peng Peng Lee.  It was unlikely that she'd be able to compete at the Olympics, but the finality of it has to be quite devastating for her and her numerous fans.  She will go on to UCLA.  One has to worry if UCLA is reloading with the walking wounded team it had five or six years ago.  We all wish Peng Peng Lee a speedy recovery and will miss her presence on the floor in London.
Posted by OlympicEffect at 5:46 PM