And The Decision Is Official 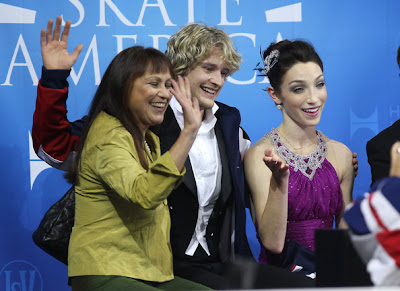 Marlie and the Shibutanis will stay with Marina Zueva as their head coach.  If there was one team that may have gone with Igor, it would've likely been Marlie.  The Shibutanis have been kissing the ass of Marina Zueva forever and rarely mention Igor.  There has always been the notion that Zueva prefers Virtue and Moir.  While Skate Canada has not confirmed that Voir will stay with Zueva, they themselves have long credited Zueva.

The internet has buzzed about Marina stealing teams from other coaches, including Gordeeva and Grinkov from Stanislav Zhuk.  It is important to note that before Marina, Igor's technical expertise only got his teams to the penultimate group at Worlds.  Both Igor and Marina have pull.  Who has more pull may very well be the question.  Igor is known to be the technician.  Marina will need to hire a technician to work the top teams.  These coaches have all stepped over dead bodies to get to the top of the medal rostrum.  The atmosphere in Canton is notoriously competitive, intense and not cut out for everyone.

The combination of Zueva's romantic style with Igor's technique and latin flair is what brought these teams to the top.  It may be difficult for Marlie to stand out in the future.  Previous students from Canton point out that the notion that Zueva is the sole choreographer is far from the truth.  Igor was the force behind Silverstein and Pekarek's Great Expectations free dance. Liz Coates, Igor's colleague prior to Marina, was responsible for training and polishing the teams, rather than being the technician or choreographer. Many of the Igor and Marina programs were collaborative efforts. This is likely not the last we shall hear of this situation.

Valentin Piseev wants to offer Shpilband the world, yet he claims he intends to remain in Michigan.  There has been no word as to whom Madison Chock and Evan Bates will work with.
Posted by OlympicEffect at 8:37 PM