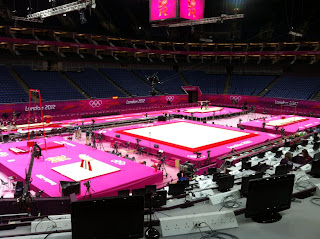 Catalina's Leo here filling in for Aunt Joyce who has a very busy day today. Women's podium training is finally here! I know everyone is excited. From what we've heard this week it looks like it is going to be close showdown between the U.S.A. and Russia for the gold medal. Never count out me and my fellow Romanians though!

Belu made us do extra cardio this morning because of our lousy training session yesterday, so I had to miss the first two podium sessions. Here are the links to the Gym Examiner's notes from those sessions:
http://www.examiner.com/article/quick-hits-women-s-podium-training-at-the-2012-olympic-games
http://www.examiner.com/article/quick-hits-women-s-podium-training-at-the-2012-olympic-games-subdivision-ii

Developing story on my teammate Larisa Iordache: She might only compete bars and beam because of the plantar fasciitus she has developed. This is all unconfirmed at this point.

Anna Li injured her neck on her UB dismount. I think I speak for everyone here at Aunt Joyce in wishing her a quick and healthy recovery.


Ok here we go! US marching in with hot pink on! Shocking!

The US is starting on vault. Maroney just did an Amanar so it looks like her foot/toe are fine.

Excellent Amanar from Gabby. Raisman does one as well. It's raining Amanars from team USA. Jordyn does one too. Kyla is doing yurchenko doubles. Maroney is amazing everyone with her vaults.

Apparently the live video isn't going to cooperate. It keeps saying it is "private." Screw you, NBC.

Gabby sat one of her Amanars as she often does in podium training. She hit her other attempts though. Some of the reporters say Raisman's Amanar has improved, but I really doubt it. They always say Aly has improved her form but when I watch her on TV it is still the same. Jordyn had a couple of near sticks on her Amanar attempts.

The Brits had a solid rotation on beam it seems. On to the next rotation.

As if Larisa's injury is not enough, it appears Rebecca Tunney has injured herself on her first tumbling run. She is getting looked at by trainers.

US on bars. Kyla does a solid routine. Gabby does a full set her first time up.

Kyla with another nice bar routine. I sort of like this hot pink leo. Gabby does her bar routine with a small error on one of her skills. Sorry this is Catalina's leo, I'm no bar expert.

Brits are going on floor, but the feed isn't showing them. Tweddle did a fantastic floor routine according to the reports. US looks done with bars. 2 minutes left in this rotation. No Maroney on bars as expected.

US to beam and Brits to vault. Canada on floor and France on bars. Please show Youna on bars!

Kyla first up on beam. Then Gabby. Interesting line-up decision. Jordyn is 3rd, then Raisman anchors.

Kyla doing her full set. Is solid until she falls off on her punch front. Martha won't be pleased. Excellent set form Gabby besides a balance check on her full. The switch ring could have been better too. Missed Wieber's first series. She still has the awful fhs-full-bhs combo which we thought might be taken out. No connection attemped with the aerial cartwheel and side aerial. Bobble on the side somi. Solid set from Raisman complete with unpointed toes and leaps that don't hit 180. Kyla is back on the beam again. NBC is making me dizzy with the change of views. Missed a lot of Gabby. Solid again from Wieber with a few bobbles. The ugly combo we all hate has a hard time flowing together. To Wieber's credit it really looks like she is trying to reach 180 on those leaps. I had to miss Raisman to update this blog. Not a tragedy. Gabby fell on her series the 2nd time up apprently. Yeah, she was way off on that.

Live cursing courtesy of NBC! "Did you see that live monkey shit?" Drops an f-bomb. On to the final rotation in this subdivision.

No Maroney on floor. What a shame if she can't compete floor in prelims. I'm guessing she won't.

Ross on floor. Oh my ears and eyes. Solid opening tumbling runs. Botched double L-turn. Pace back on her double tuck, couldn't see if she went out of bonds. Gabby a little short on her triple twist, hop forward. Excellent on her other passes. Jordyn sticks her double double cold. Killer routine from her except a little hope back on her double pike.

Aly tucks her front layout on her first pass and is then short on her arabian double pike. Her triple twist was, ehh. Not a great routine from Aly.

Tweddle looks amazing on bars. She is doing a double double dismount now instead of the full-in. That does it for subdivision 3! I'll make a new post for the next subdivision. I hope I'm doing ok filling in for AJ. I'm a rookie at this, bare with me! Ok Catalina's leo needs a pee break before Mother Russia walks in.
Posted by Laura at 6:20 AM