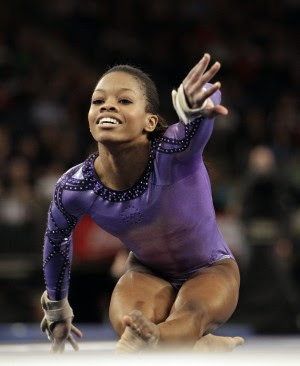 Child, it is the Olympics. It is time for Aly Raisman to show us her beautiful dance. Gabby's weave is on and she is ready to show the Queen the moves of the flying squirrel.

Apparently Maroney is doing two vaults and a bunch of nerdy gymnastics fans who need to buy vibrators got us in a tizzy for nothing.

My Maroney face is on. My inner alien is ready for this period stained arena. God Bless the British announcer. Beth Tweddle, Uschi Keszler's Cyborg Pony, is in the house. Drunksana, Uschi Keszler, WestPalmBitch and I are up and ready to provide you with what to watch for at this beautiful Olympic Games. Shannon Miller and her beautiful Kim Zolciak-line of wigs are going to deliver. Shannon has a very Tonia Kwiatkowski-commentary vibe going on according to WestPalmBitch and Uschi. We are all watching Ice Network and it will all come back to Tonia being the alternate at 1998 Olympics.

MyKayla looks so good! Purple with her swag. Why are there open seats? We are having breakfast and hoping to look as fabulous as dear Kloe Chanel. And NBC is showing us a Chevy commercial...

I am living for Great Britain's beautiful leotards.

'Can Beth Tweddle compete with a bag over her face? That would make my morning a lot better!'-Drunksana

'Did they hire an Asian slave to do all their bitchwork?'-Uschi Keszler

That was the best Raisman has ever done that vault. Her knee bend was not as bad as usual. She kept that shit laid out for longer.

Victoria Moors- Jennifer Robinson up on bars. This is the best she has looked on bars.

Gabby Douglas. Clutch the weave. And she does it! Minor hop and off center, but Martha has been training her ass into the ground. She was been practicing telling Ryan Seacrest that Jordyn is her best friend. 15.900.

Here is Jordyn ready to land like a thud. Here we go. Lands out, but very steady. Let's hope she hits the red area in the All Around. Drunksana wants Komova to land on her back just so I burst into a fit of tears...like watching Michelle Kwan is Salt Lake City.  HD is not kind to the thighs of some of Team USA. 15.833.

CMON MYKAYLA. Nastia has her 'look that could melt steel' look on. EW landing. She has not landed well all year, likely due to her injury. It is gorgeous in the air, but she is flying forward. The execution in the air needs to be rewarded, but that landing was not acceptable.

Don't show Hannah Whelan when Maroney is going for her second vault. She is the 20th place girl in the all around we only pretend to care about. That was a hideous switch ring. British girls should not do that element. I live for Whelan looking like she is about to land her dismount on her head and the stupid NBC app goes to commercial. And we are back....the dismount was just shitty, she landed it by a few inches.

Maroney 2nd vault.  15.900 for the first. She needs to stick and score huge. Apparently she stuck the second vault, yet we have not been shown it by NBC's stupid app...we are seeing Hannah putting on her band aid.

It is so nice that they let Canada compete in the Olympics. Their ladies are bad enough in skating, yet we get to see them look like sixth graders playing around in gym class for two weeks in this sport as well. 14.500 for Brittany Rogers...and she was brought as a bars specialist.

Dominique Dawes is NOT pleased about the empty seats in the arena, yet she knows many people who were unable to get tickets (like herself.)

Uschi thinks that Canada and France look the same...and equal level of suck.

Shannon Miller did that vault better than this French girl, with her one wrist in '96.

Why isn't Aurelie in the weight lifting competition?-WestPalmBitch

14.166 for Raisman on bars...someone is paying for these scores.

Jordyn's bars look like work...and the arch on the upper body. We need to send her back to level 5 to learn to swing. This is her Kim Zmeskal moment. Get ready for a comeback at 26 and some fucking tears. Shannon Miller just said that she is used to being heinous on bars. When Shannon calls you so strong, steady...she is calling you fat and thick. Jordyn needs to adopt the Shannon Miller Lifestyle and do some yoga.

This is Kyla's event...it is all so clean and actually is having some slight issues, legs coming apart, a flexed left foot at times, but hit. 14.866 for Ross.

Here we go...Gabby Douglas and the weave. Crooked on the piked tketachev, but fixes it. Her pak makes me so nervous. Nice routine from Gabby...little Morgan White-ish on the second salto of the double layout. She will make finals.  15.333 for Gabby. Only yellow on NBC!

Hannah Whelan on floor...Drunksana is not worshipping her European Bronze medal. The music is nonexistant on NBC's feed...it is modern interpretive dance in gymnastics. Lands with a thud.

"She's a cow, I don't understand what is appealing about her."-Drunksana
"They put her on the team for being thin four years ago. Times have changed."-AJ
"I'm done with her, God Bless the Chevy commercial."-Drunksana

These girls are landing with thuds, Vaculik fell on her back tuck on beam and her aerial cartwheel. Joanne McLeoud is clearly teaching women's gymnastics.

Beth Tweddle! Is that opening pose supposed to be sexual? This beast might win floor.
"I don't think ponies are allowed to win floor. She is trotting across the floor searching for carrots."-Uschi Keszler

Why the fuck is that dance?
"I definitely need a drink now."-Drunksana

They need to be taking the artistry deduction for Beth and all of the American ladies. Trotting as a pony is a three tenth deduction...minimum.

Kyla Ross on beam. This goes fast. Switch ring to back tuck. Is Nelli Kim on her side for that connection? Martha has successfully made this team dreadfully boring and Romanian. Experience doesn't mean shit, Shannon. Those British and Canadian girls compete all the time and still look like shit.

DTY from Rebecca Tunney! Chest down and touches the red.

Jordyn looks bored. Little balance check after the back pike. Her hair is a mess. Didn't do the side aerial+side somi connections. Zero split in the leaps. Almost off on the switch side. Wobble on the full turn. And NBC goes to an ad mid dismount. Never buying a Chevy...ever. Geddert looks annoyed at Jordyn...though this is how she has been looking for months. The girl is looking muscled and sluggish heading into the biggest meet of her career. Gabby is going to beat her by a sizable margin with her beautiful floor routine. Jordyn has been watching her AA moment in the sun slipping away for months. 14.700 for Wieber. Her face tells the true story...her interview will not.

Raisman on beam. Looking very square. The feed is freezing and WestPalmBitch is squealing like a gay bitch thinking she fell.  She did not. The feed keeps freezing and shows Aly bent over for 15 seconds. "She is taking a shit on the beam. Nothing is coming out though!!!!"-WestPalmBitch

It looked like a possible floor finals for Moors, but she got Canadian at the end and went out of bounds.

Kyla Ross is out of bounds on her double arabian. Shannon would've loved that spring floor for her double layout.

'Does Shannon have children?'-Uschi
'She has a son and a wig.'-AJ
'Shannon and Gabby trade weaves.'-WestPalmBitch

Kyla will be bitch slapped by Martha.

Look at Aly being the team captain."okgirlsletsrockitforteamusatodayandbegood friends.'

Rock the weave, Gabby. Pat it!!!  Gabby's opening move is pure Shannon Miller Lifestyle yoga. Stuck first pass. This is her time to show her weave. I am Nicki Minaj!!  And she stumbles out of bounds on the double arabian...at least five tenths. Shannon said to done down the weave. Namaste, Gabby, Namaste!  Stuck tuck full in. Hideous split leap out of her double tuck...she should lose the minimal bonus for the utter laughability of the attempt.

I think Gabby gave Raisman or Wieber her ass. She is clearly thirty pounds lighter and it shows.

Why is Shannon commentating with a British dude? Why isn't Shannon showing us how to do compulsory beam? She needs to tell us what she and Peggy thought of Dawes on the apparatus.

Tunney looks like a stumbling fighter on bars...Shannon says that you don't want to stay up there too long (and rack up deductions.)

Beth Tweddle on bars...beef is what's for dinner.  That is a gold medal exercise. Ride the pony!

13.766 for Gabby on floor. This is like our Athens floor team. Where's Courtney McCool and Kupets turning on the wrong leg? Mohini can't save their ass now.

Jo- lands the first pass with a thud. Out of bounds on a leap she didn't need attached to the triple full. "Some room for improvement"- no shit Shannon Miller. Not many smiles from the supposed unstoppable American team. Davai Davai. Shannon is not acknowledging the suck...she is a very good Republican and able to deny reality.  'Terrific competition for Wieber?'...um not so much.

16.133 for Tweddle on bars. Only Maroney can outdo that score...if she sticks.

We are reading useless tweets by Alexa Ainsworth and wondering how fat and sucky she was as a skater. Not as big or as fabulous as dear Kloe Chanel.

We should just fuck it and put Maroney in on floor for team finals. 14.666 for Jo.  If not for floor, Gabby would've killed her today.

Aly on floor. The Zaretskis free dance. Cmon Aly...needs a 14.966 to make AA. Cmon Aly. That would be fabulous. Knock Wieber out. To the rafters girl, sell that dreidel. I love that she tries to present to the judges when going clit to floor. Sticks the triple full.  15.000 CMON Sticks the leap out of the double pike.  Knock Jo OUT!!!!!!!

If John Geddert would like any advice on why this happened, I'll be happy to field a phone call.

Aly is crying and beautiful fake Tanith is on TV. 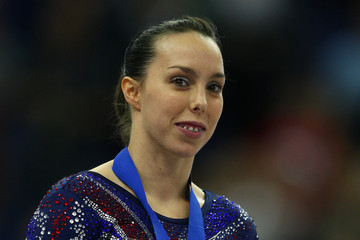 Posted by OlympicEffect at 6:39 AM