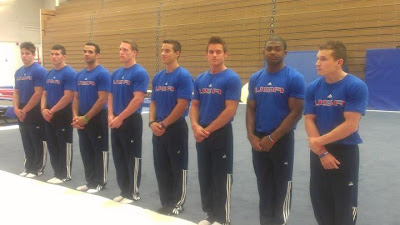 The men of Team USA at their training camp.


A fantastic interview with Tatiana Lysenko.  Ms. Lysenko is extremely intelligent and gave the best answers ever seen on gymnastike.  It should be noted that their usual interviewers are not responsible for this great work.

Sabrina Vega says she is aiming for 2016.  While this is likely the post trials emotion talking, the girl does need to be realistic.  She upgrades at a snail's pace.  The sport is passing her by.  Either she needs to switch coaches to a magician, or she needs to head to college.

Shannon Miller teaches us how to attain perfect splits.

Cynthia Phaneuf is out of the Grand Prix with a stress fracture in her back.  Phaneuf wasn't given an assignment in the series, but was hoping for the TBA spot at Skate Canada.

The Chinese Men are heading to London.  Lu Shanzhen told IG that He Kexin isn't officially the fifth team member yet.  Jiang Yuyuan, He Kexin and Tan Sixin are still battling it out for the last spot despite media reports otherwise.

Both programs were choreographed by Karen Kwan and Peter Oppegard.  He will debut them at the LA Open.