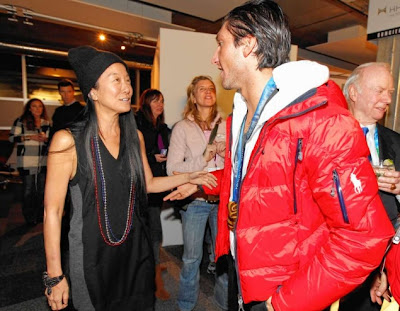 The verdict has long been out on Evan Lysacek and his personal life and the Daily News has just made things so much more fun for everyone else.  Last year, Aunt Joyce and friends had the please of sitting across from a plastic cup-beer-drinking Vera Wang as the outrageously thin fashionista in her signature homeless-looking cap fell over herself applauding for Evan.  Vera has made it known just how much she loves the Olympic Champ to everyone, including the press.  It turns out that Evan is now living with Vera.  What is most interesting is that Vera filed for divorce after allegedly getting a face lift.  One has to wonder if Ms. Wang was please that Evan and his entire family were spotting at the Olympic Trials rooting on a longtime on-and-off flame?  An overzealous fan from GGMB (one of the ones known for kissing Moceanu's ass) was spotted at a restaurant dropping her purse into Lysacek's plate as she attempted to greet the reigning Olympic All-Around Champion.

Mr. Lysacek is training in earnest for a comeback and is likely to throw a wrench into Johnny Weir's plans.

The shadiness always seems to follow the Vancouver Champ.
Posted by OlympicEffect at 10:20 AM