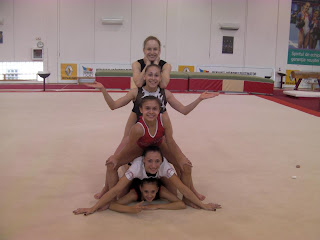 New post to get rid of the text issues. Romanians currently on vault. Catalina just vaulted a big yurchenko double.

Izbasa does a nice Mustafina vault. Blythe says it rivals Maroney's. Not buying that yet until I see it in person. Chelaru does a yurchenko double and then adds a half turn jump on the end. Planning to upgrade to an Amanar soon? The reports are bit confusing, but it appears Izbasa is trying out a Cheng vault as well.

Larisa Iordache makes it through her full bar routine. This is really the only important bar routine for the team.

Bulimar appears to be doing well on bars for a Romanian. I love this little spitfire! Unfortunately Koko Tsurumi might have sustained a concussion when she fell on the tumbling run I mentioned above. Our thoughts are with Koko. She's a lovely gymnast to watch.

Rie Tanaka for Japan is doing a floor routine to Pink Panther and James Bond music. Sounds like it will be a crowd-pleaser. Koko guts out a floor routine.

Larisa gets through her very difficult beam set without many problems. I would not count this girl out of the all-around even though Belu and Bitang are saying she won't compete all events. They love to shock people.

Catalina's Leo is working the beam over as she usually does. Fierce routine with no question marks regarding the connections (unlike a certain American...) Full-in dismount baby! It appears they might have taken Larisa's full on beam and have her tumbling to a two-foot layout. Probably a wise decision. Wobbly beam set from Izbasa.

Well that does it for podium training! It's been fun. Hai Romania!!!!