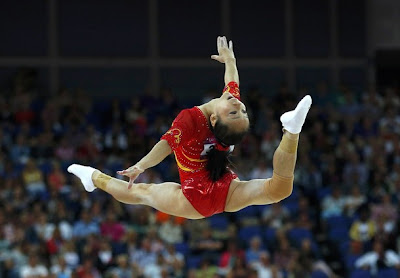 It is time for the real NBC trio!

It is ten seconds in, and NBC is already letting us know that anything less than gold will be hammered home as a failure. Shots of them all crying. Martha looking like a witch at camp. This fluff with the shots of them as children is rather adorable, but could always use more Maroney. The shot of baby Gabby smiling is made of total win.

Jordyn's vault looked a tad lower in the warm up. It has all looked like work for about a year now.

Seen for the second time today...best vault of Aly Raisman's life. The form was not nearly as bad as it typically is. You have to respect the girl's work ethic, determination and mental strength. Mihai is talking to Aly from behind the barrier...I'm terrified about the Bela Karolyi parallel forming in my mind.

Aly is very supportive of the other girls..genuinely so. The girl may be fugly, but she does appear genuinely nice.

"She weighs like five pounds."- Mommy Dearest on Gabby Douglas

Gabby's hand guard opens up and she nailed it. 15.900 on vault...very impressive.

Watching this meet back, I do feel for Jordyn Wieber and can't help be feel her coaches are to blame for the routine construction. I said it at the American Cup. I am not a coach. If I know they are never going to be credited, the man whose profession is it should've had the foresight. Jordyn's beam routinne would be perfect for Ludmilla Yezhova or anyone with finesse. You don't give a powerful brick house a routine designed for a bendy finesse artist.

Solid Amanar from Wieber. It is not as dynamic or explosive as it was at the World Championships, but it is very good. Very good.

McMayla My Darling Maroney- HUGE vault and a huge step forward. Let's pray she saves her Day 2 trials performance for finals. Martha is watching her golden vaulter like a hawk. Best Mustafina I've ever seen. McKayla is made of total win. Give some of it Sasha Cohen.

Tim is underestimating Russia on bars. If Grishina shows up in finals, things will get very interesting.

Rebecca Tunney is much better than the token waif Team GB took to Beijing. This routine is quite cautious, but successful. I miss the requisite flow and beauty of balance beam. This is something we sorely missed all day in the beam routines. There needs to be a rhythm deduction in the next code that is seriously enforced.

Token Bela fluff. I live for the way he can turn on his persona for the cameras.

Bela is fascinated by the brilliant Jewess Aly Raisman with the well structured mind. She reminds him of the great Phoebe Mills. He would've paid six figures to steal him from her coaches. One of the best bar routines Aly has ever done. Is it a good bar routine? It is not as bad as it was two years ago. I live for Aly's mothers and the curious father. OMG this is an Olympic moment. The reactions of the people around them are priceless.

Jordyn Wieber has struggled with this routine for two years, yet John Geddert has not changed it. The same errors and deductions are the ones she made at the 2011 American Cup.

"These US female gymnasts do not play, and they are hot. They're like the Olympic Spice Girls.'-Bethenny Frankel

Did Aly's mom drop the f-bomb earlier? Do we love her more for it?

Kyla Ross is not quite exquisite, as her feet and toes are not locked out to Mostepanova standards. Just ask Nastia, those toes made up for those giant swings. Kyla is steady and reliable...like a Ford Taurus.

This camera angle is far for forgiving to the American girls on bars. If Gabby stays with Chow any longer, she will get a legit dead hang. That is when you know you've made it as an Asian. Aly is so supportive of everyone! The rest could give a shit.

"I'm already living for Oprah's Next Chapter when she visits Gabby and Mom."- A Dedicated Reader

Oprah's right hand, Sheri Salata, is already tweeting about Gabby. It is done!!!!

Facebook is telling me Chellsie Memmel got engaged today. Kudos to Chellsie.

Kyla Ross- girl grows by the day. That was a Nelli Kim leap connection. Steady. I'd put her up on beam in team finals over Jordyn.

Gabby, like Shawn Johnson, knows her to turn on the smiley persona. I love that she just admitted that her old coaches weren't cutting it. Oprah is eating up this single mom fluff piece right now. Gabby is definitely likable.

"Gabby needs her teeth fixed to smile that much on national TV in HD.'-A Fabulous Jewess
"Nice teeth!"-Mommy Dearest

Gabby- small check on her series. Stuck back full. She is going to make everyone white knuckle team finals. Clutch the weave! This is the event Gabby originally stood out on as a baby elite. Switch ring...the back leg was not cute. How are her coaches the rejects from the Chinese National Training Center? Did they miss the Yang Bo leap class? Maybe she learned it at the old gym, where we know they weren't cutting it.

Jo Jo- Solid series. This Yezhova routine was never going to work. The fact that Geddert is shocked that Jordyn didn't get questionable skills and connections is rich, as she has been lacking in the basics for quite some time and they've only deteriorated as she has gotten closer to the Olympic Games. The leaps are clearly not working. Martha needs to send Shannon, her old scruchies, her lifestyle and her OCD around the country to work on the leaps, extension and finishing touches of the American beam routines. Not PC Shannon, real bitch Shannon who was crazy enough to win Olympic Gold at 72 years old with a worn out body. Jordyn did not bomb today...this is about a coaching error and focusing on big skills too early as opposed to developing basics first and skills later. This is why Geddert is more of a JO coach.

It is interesting that John told Jo she was in trouble re: making AA finals. The switch side has been getting sketchier and scarier all year long (last year too.)

If only Alicia had Aly's toughness and work ethic. Maybe we could've actually seen if the Chinese babies could've held up to the pressure in the final rotation. I need Lynn Raisman cam. The best part about the Patterson dismount is that NO ONE remembers the 2004 Olympic Champion.

What is the American tradition on floor?  The Courtney Kupets crab walk?!

"I just hope Aly Raisman retires after this because she might look like Golda Meier without the cigarettes. Her mother must starve herself to stay that thin. No matzo for Mrs. Raisman."-Margaret Thatcher

"Lets be honest, if that relay were Phelps' last race in Beijing, Lochte would've been doggie paddling the last 25."- Dedicated Reader

"My sister just asked me if Ross picked bad music to distract her competitors."- Fabulous Jewess
Time for Gabby Douglas on floor.

Gabby's awful music is growing on me. Her late-twisting arabian technique is not.

"We stink. Good thing you're rooting for the Russians."- Mommy Dearest

"I think I made my turn."-Gabby Douglas

Martha was clearly DRILLING the girls on their turns.

"Gabby didn't quite work the weave tonight."-Uschi Keszler
"She was trying not to over do it and go out of bounds. Gabby just flew out of bounds. Child, she was asked to ditch that fifteen cent weave. Jordyn just looks like a volleyball player with her hair."-Margaret Thatcher

Not an awful day for Jordyn. It is one she will second guess for a long time, but it was far from awful in terms of her performance. As far as meltdowns go, this is quite minor.

"She really wasn't bad, she just went out."- Mommy Dearest

"She looks like Courtney Kupets in Athens, but Courtney had a massive [achilles] injury."-Margaret Thatcher

Aly- "This is one amazing Jewess. This routine is actually entertaining unlike Jordyn's barf fest."-Margaret Thatcher

I actually didn't see the shot of Jordyn crying earlier, which is heartbreaking for her. We started screaming and jumping after Aly finished. This is still shocking to see. This is athletics. Raisman brought it and earned it. You cannot have an off day on Team USA and make it. The three-per-country rule is bullshit, but it is something these girls have never grown up with.

"The Jewish people have suffered enough to be associated with Aly's foot form."-Fabulous Jewess

Aly is the new star of Team USA! #TeamJewSA

One can never get complacent in an Olympic year. Aly fought and came on strong. Aly was pissed when she wasn't selected for Pac Rim and it clearly fueled her to new heights.

Classy interview from Jordyn in the situation.

Here is Bela to add his brand of bullshit. Where is his level of concern when the cameras and money aren't around?

"Don't you think the floor exercises were better in the '70s? The music seemed to be better and there was more dance to it. Nadia and Olga, they were cute and now it is just boom boom boom boom boom."-Mommy Dearest

Al has clearly never been to the Bolshoi.  Aliya is wonderful, but not a ballerina.

Komova needs to sharpen up floor as the week goes on. No new combo out of the triple full. Out of bounds on the last pass. She messed up the dance a bit. Her ankle is clearly never going to be 100%. This is not a strong event for her.

Elfi approves of her hair. Komova will learn from that 13.900 on floor or Aliya will kick her with her good knee.

Anastasia Grishina- Her eyebrows are such the statement. I don't know who I'd put up in team finals on this squad.  They need to get their shit together and give a little more of a shit in podium training.

NBC better show the Afanasyeva gay dream OR ELSE.

The two-per-country rule is only going to give us a shitty AA final if any of the top girls make a mistake.

Show. Us. Afanasyeva. David Michaels has failed us for the millionth time.

The Michelle Kwan and Greg Louganis commercials are the highlights of London thus far.  Michelle has NEVER looked better!

NBC skips bars to show us shaky Russian beam. It's like they don't get the sport. They also chacked a beautiful Beth Tweddle moment on bars.

Elfi can't distinguish between Asians and is now crediting He Kexin with inventing the Li Ya combination.

Vika---I love that NBC skips her most impressive moments on bars and vault. Look at the quality of the work when she hits. It is like Nastia...with power. Those Kolesnikova genes are freakish. Two backhandsprings to a double arabian. Sick.
Posted by OlympicEffect at 6:00 PM