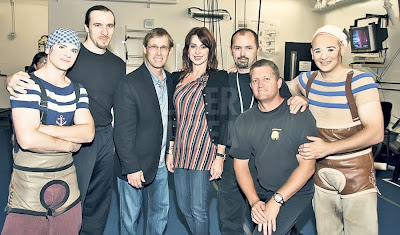 Nadia Comaneci and Bart Conner were recently photographed with cirque performers. Given Nadia's 'dental work,' it is difficult to determine who the clowns are.
The results from the mens qualifier are in. Jesse Silverstein defeated Danell Leyva by four tenths for the AA crown. Handsome Alex Buscaglia (former beau of Anna Li) tied for fourth and Alexy Bilozertchev finished sixth. Daniel Ribiero was second on pommel horse.
Videos of Grace McLaughlin's Vault and Uneven Bars from the Elite Qualifier have been posted. Looking at Grace's slow and steady progression, improvement on beam and strength on bars, one can easily see Grace capturing Martha's attention should she make the National Team this summer.
Sasha Cohen and Rockne Brubaker did indeed have a pairs tryout. One can only imagine what they'd be like as a pair. Sasha would surely have the most stunning lifts and split twists, with throws and side by side jumps that rivaled the consistency of Keauna. Should this pair be successful, it would keep John Nicks in the sport and be highly entertaining.
Fedor Andreev and Jana Khokhlova are progressing well in training and expect to compete at Russian Nationals.
Belgosto spoke to Susan from Lifeskate about their future plans.
Training footage of the Blahtah freshmen has been posted. Summer training in the NCAA is always interesting. Workouts are 'voluntary' and coaches are only supposed to be there for spotting purposes, but in actuality, many gymnasts learn new skills and new routines over the summer. Courtney Kupets learned her 2007 UB routine during the summer. Lothrop looks to be in good shape for NCAA.
Posted by OlympicEffect at 7:30 PM