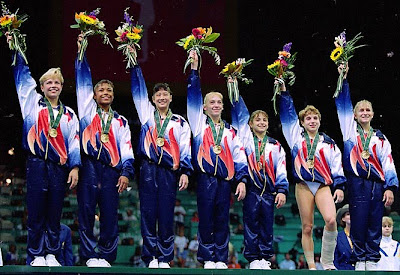 I confess: I was 10 years old when the Magnificent Seven won gold in Atlanta and was a total fangirl. I had already been a bit of a gymnastics nut, but their win threw me over the edge. There may even have been a tour that I went too and was surrounded by young screaming gymnasts... I was all about Shannon, Moceanu and Awesome Dawesome. Instead of the usual montage clip where we can watch Kerri's vault for the millionth time and debate whether or not she needed to vault again (and didn't her teammates wind up hating her for the attention she got...), I've decided to post one of my favorite columns about gymnastics.
This is from Cintra Wilson's column, The Awful Truth, which appeared in Salon.
Gymnastics - As Wrong As Veal

"can you see them? Can you see them? Little girls, dancing, dancing for gold." This was the Redi-Whip poetic musing of John Tesh over a blurry montage of the tiny airborne buttocks and barrette-covered cupie heads of our "Magnificent Seven," America's colossally depressing women's gymnastic team. Dominique Dawes, formerly a cat-eyed ball of lightning, now over the hill at 19. Shannon Miller, brimming with negative anti-charisma, her expression ranging from pain to scorn, fear to humiliation, boredom to hatred. Dominique Moceanu, the plague of cuteness, whom every advertiser was circling like vultures around a stumbling ibex -- a perky lil' American tumble bunny all ready-for-shelving at Toys R' Us, with Big Gulps and Burger King Happy Meals prematurely climaxing at the thought of pressing her into a plastic action pony with long, combable hair. Kerri Strug, homely and afraid, who wasn't cute enough to be loved by America until she crushed her ankle with the bases loaded in the ninth. And those other Midwestern girls who've never had a real life other than bulimia and blood blisters and chest binding and galloping tendonitis, whose growths have been willfully stunted like bonsai trees.

These poor young women must be set free. Who are the idiots who told them that winning a gold medal at the Olympics would be worth sacrificing their height, their self-image, their entire childhood and their bodily comfort forever? Sure, they can jump and twist and handspring about like superballs, but Christ, get them off the mat and they all look like a monsoon just hit their home and drowned everything they ever loved. All this is compounded by the chattering heads of their horrific stage parents with their inky tentacles groping for vicarious glory, weeping and sputtering and waving little flags with their eyes rolling back in their heads, awash in their strange addiction. They are not much better than those parents in Calcutta who poke eyes out of their toddlers or hack them off at the knees to make it a more pitiable beggar. Gymnastics must be destroyed.

The gymnastics aesthetic looks like it was created by a bunch of dangerously repressed old Quakers. The unlistenable, frantically upbeat, Germanic orchestral power music, the bad leotards, and the strange choreography (whose roots are nowhere to be found in the world of dance) have devolved into an absurd display of heroic suffering and contortionism and a mockery of teen femininity -- something like a neo-Christian peep show, with hardcore ambition being the pornographic element. Before the games "Sixty Minutes" featured a segment on a sad blonde former gymnast who discussed her relationship with her coach. "I grew breasts and he called me a fat cow," she lamented, her eyes still overbright with thinly contained self-loathing, smiling with her teeth. "I've been bulimic ever since."

Nothing exists after gymnastics. These poor creatures turn five circles in the air trying to fly closer to the sun, only to be eventually defeated by gravity and puberty, and spend the rest of their lives as travel agents with terrible secrets who don't work and play well with others.

Case in point: the obvious misery of Queen Nadia, the former world's most perfect, wrapped in too much makeup and emotional murk on the sidelines. This is not a woman brimming over with enthusiasm and love for the art form. She still hates everything. Her eyes stab out of their painted holes like sharp pieces of obsidian; her body language nails her off like a condemned building.

There is some unwritten law that says that only virgins can be acceptable gymnastic hopefuls, because once the women start to look more adult and sexualized, the impish scampering and bent-wrist coquettishness start to look like the over-the-top beckonings of a palsied crack hooker. Nobody wants to see liquid eyeliner, buttock gyrations and the pain of sexual knowing on the faces of these 4-foot-ten elf girls. Some of the Russian women, for example, had a stone-ground unwholesomeness in their faces and eyes, like they were about to patrol the streets for bored townies the second they got off the mat. "Hey American! You vatch Olympic on TV? You are 21 can buy Zima Clearmalt? Ve got pills. Get in van." Rap music, tinted windows, lascivious scream-cackling, legs at impossible angles hanging out the driver's side window.

The heartwrenching stories were another travesty. "Little Natalia was ripped from her mother's womb with a set of ice tongs by Communists and given to Dimitri, the unfeeling taskmaster who would be her trainer for life. Natalia developed her upper body strength dragging corpses over the harsh terrain of the steppes to the local incinerator, near the ice cave she called home. Dmitri would tell Natalia hourly during her rigorous 17-hour training sessions that if she stopped moving she'd be clubbed by trolls. Sleeping with only a sheet of used aluminum foil for a blanket and a tray of radioactive beef to keep her warm, Natalia dreamed of the day she would be able to fly. And fly she does. Winning is all she knows, this tot-faced little angel, and if she doesn't bring home gold for her country, her little body may be sold and converted to shark chum." Cut to shots of Natalia rubbing rock salt into her bleeding hands, having her head shaved for lice, praying in front of a huge, green, dead Jesus.

America hosted this Olympics like a bunch of mobsters -- we did everything but crowbar the kneecaps of our opponents, what with the alleged bad lodging and timeslots doled out to the Romanians, and the terrible din of bellowing Americans stomping and hog-howling with pride for their own during the routines of other athletes. The bombing was the perfect manifestation of everything terribly wrong with us -- our ugly brutish power, our gracelessness, our dumb inability to be elegant in any way, our might-wielding and caveman animosity. We must stop taxidermizing these children with steroids and propaganda and turning them into joyless go-bots. If we can't do that, we should at least let them flip around to the music of their choice and put more artistry into the program instead of tethering their talents to the dumb specifications of a bunch of unlubricated clipboard Nazis. If we're going to ruin their lives, they should at least get to enjoy it a little before they have to begin the long years of psychotherapy it will require for them to become human again. Let those poor little women get drunk and laid on the couch before it's too late.

Posted by OlympicEffect at 1:22 PM