Make It Or Break It: Guess Who's Coming To Dinner 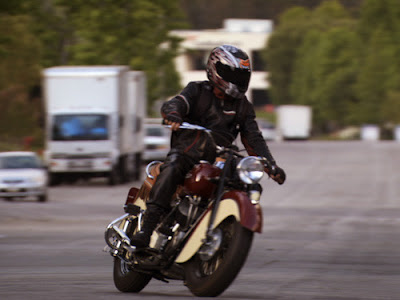 The drama never quits in Boulder. Thanks to Lauren Tanner and the rebel rock girls, it keeps going and going like a freakin Energizer Bunny. The girls have returned from France and are anxious about seeing Sasha. Payson is too humiliated to even drag her fat ass into the gym. Ms. Better-Than-Everyone-Else couldn't make the National Team and is now whining about having grown an inch. And you thought you had problems... Sasha isn't overly pissed at the girls for defying him, but he does appear to be taking the reigns a bit more than usual. Lauren Sociopath Tanner asked Sasha if she's officially ranked number two at the Rock now that she finished third in the France. Coach Belov informed her that he'll rank them when and how he damn well pleases. He told them to get their asses into gear just as hottie Austin Tucker rolled into town on his 'crotch rocket.' The Olympic Champion/Rebel/Man whore/Walking Case of Crabs immediately took over the gym with Sasha's approval.
Kaylie, Ms. National Champion, was not pleased about this turn of events. No one told her that he was going to be training at the Rock! She is the National Champion! The writers only referred to her as such five times during this week's episode. (Technically four, but she said she was 'number one' as well.) Somehow, being the National Champion, has made Kaylie the team leader and she is somehow responsible for her ADD teammate Kmetko, her sociopathic teammate Lauren and moody ass Payson.
Now that Payson isn't going to Worlds this year (until they create a loophole), she wants to stay in bed and cry all day. Coach Belov went to her house to coax her into returning to the gym, but Pay knows she'll never be the gymnast she once was. Not a problem according to Sasha, he now plans on turning her into the next Nastia. Powerful Payson (built like a backstroker), can't imagine herself ever being graceful. As a child, Payson was cast as the Ice Prince for the holiday show. When Payson told her mom how she longed to be a princess, the producers had her skating around in hockey skates. She might as well have been wearing Doc Martens, flannel and a fedora. Samantha Ronson just can't imagine ever being a lipstick lesbian, I mean gymnast, and 'is scared.' Secretly, the actress playing Payson is somehow a successful ballet dancer. I always figured an eating disorder was required for that sort of thing. 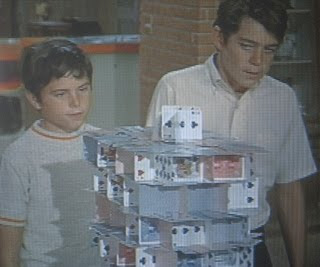 The writers were kind to us this week. After forcing us to deal with the shock of Payson becoming an 'artistic gymnast,' they kept the rest of the episode rather predictable. Pissed about the gym being rearranged, Kaylie accepted a challenge from Austin, boys vs. girls, competing on the opposite sexes' apparatus. There hasn't been a battle of the sexes like this since the Bradys built that house of cards to determine what to spend their trading stamps on. Row Boat! Sewing machine! Row Boat!
The boys ultimately came out the winner, but Austin made some lame ass compromise with Kaylie. He clearly wants to do her, but they're building up the sexual tension. Even Carter can't resist his good looks. Carter ditched Lauren to go grab a couple of 'colds ones' with the Olympic Champ. (And you thought this was a tween show?!) 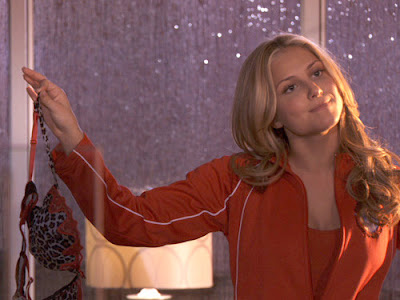 Lonely Lauren is left out constantly this week. Kaylie buys three purity rings and refuses to give one to Lo because she 'isn't forsaking much of anything these days.' Luckily for Lauren, her beloved grandmother is coming into town. Grandma is delightfully snobby and is horrified by Lauren's gymnastics. She'd rather she took up a life or death hobby 'like shopping at Filene's. Since Lauren's own life is in the shitter, she decides to make everyone else miserable.
Mr. Tanner doesn't think things are serious enough with Chloe to introduce her to his mother, but Lauren gets Grandma to invite her to dinner assuming she will hate Ms. Leopard Print. In case you didn't see it coming, Chloe looked positively regal and Emily managed to clean up well herself. Lauren acted like to witch she is all throughout dinner. Chloe, who was so excited to finally be invited to meet a boyfriend's mother, was devastated to hear that it was really Lauren who did the inviting. Lauren now wants Sommer to get back with her father, even though she hated them together last season. 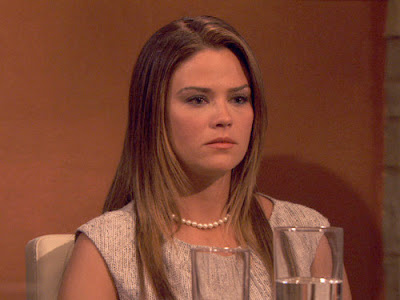 Lauren was hoping that Grandma would be appalled by the relationship. Lo has a scheme in her mind where Chloe is merely trying to become impregnated by her father and force him into marriage. Actually, it sounds exactly like something Lauren would do to Carter if he began losing interest. The shot of the happy family at dinner made one wonder just how long we will have to wait until the show takes a Step By Step turn. When will we have a wedding? Will Emily's brother roll the rings up the aisle?
This episode's Vomitorious Moment of the Week came from Payson's sister (she doesn't deserve a name) who told her mother that gymnastics was 'supposed to be fun, teach us discipline and self esteem.' Oh honey, shut it.
Next week, Emily is looking like a champion and Kaylie comes unglued. Her National Title is meaningless if it costs her her family!
Posted by OlympicEffect at 10:13 AM