Make It Or Break It: Song of the Fat Swan 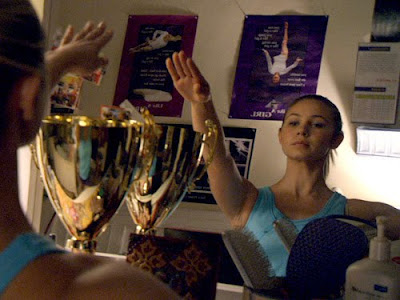 The Rebel Rock girls are preparing for Worlds and this week it was time to get new floor routines. As usual, Steve Tanner is all about buying Lauren the best choreographer. Lauren was all about having the best floor routine, but she didn't manage to call the choreographer because she was all about creating drama with Carter in order to force him to spend time with her.
In the mean time, Chloe Kmetko called the top choreographer (sadly not Geza Pozsar) and snatched her up for Emily (with Steve's money---well, the anonymous scholarship funded by Steve.) Emily had a block working the choreographer, but stayed late and the new hottie helped her find her inner dancer.
Lauren somehow didn't have a choreographer that week but decided to seek revenge by stealing Emily's floor choreography. While she didn't do the routine to the same music, Emily was quite shaken before she took the floor to debut her routine at the Rock's floor exhibition. As expected, Emily out performs her and blah blah blah. Who cares.
Let's discuss the real shit this week:
1. Payson displayed her award-winning attitude when she pouted and bitched about having to learn an artistic floor routine. Didn't we already deal with this? Ms. 100% was throwing a bitchy fit so Sasha took her the ballet. One of those modern So You Think You Can Dance performers basically made a mockery of Swan Lake by performing bare foot and making it all modern. Swan Lake is about classic technique. Of course, Payson was captivated by it. She didn't perform at the exhibition, but the episode closed with her dancing Swan Lake on the floor mat. Of course, she was quite good. It was Oksana Baiul's short program meets the floor mat. Hilarity. Oh well, big girls have dreams too.
2. Kaylie's storyline is an obvious homage to the struggling Lindsay Lohan. The writers are copying the part trap only Kaylie doesn't have multiple personalities (yet.) Her mom is now her publicist and her dad is her manager. Kaylie is forcing all of these family dinners and yet we don't even get to see her hot brother. The actress mother wanted her to do some Rock N Roll routine while the father wanted classical...so what do they do? Compromise. My friends used to laugh their asses off at Kaylie's old floor choreography, but this new display was something else. It was 50% classical, 50% Ariana Berlin, and 100% wrong, wrong, WRONG. Even the gym moms were aghast. She may not keeping the routine, but we will still be forced to live with the memory.
3. Lauren was all up in Carter's grill asking him if their relationship was just about sex. Carter has a Lorena Bobbitt on his hands and needs to be VERY careful. I mean, if you even need to ASK the question... At the end of the episode, Carter tells Lauren that he has seen her best and her worst sides, but that her worst makes him unable to love her. We can only imagine how psycho Lauren will respond. As always, her focus is not on gymnastics. Can she please miss the World Team and go Tonya Harding on Kmetko? One can only dream.
4. DJ Tanner is hungry for a little D. She was devastated that Sasha took Payson to the ballet over her. It looks like they'll be married in a Balance Beam wedding before long. The girls will be bridesmaids and they'll all walk down the vault runway.
5. Kaylie's eating disorder/hyper working out situation is actually running longer than things typically do on this show. Ms. Cruz is working herself into a tizzy and not eating. Obviously, she is looking fabulous. Her parents aren't really paying attention to the situation, so expect to see this getting out of control in the next few weeks. Luckily for her, DJ Tanner has had her own struggles and will be there to lend a hand.
Next week looks like candy for all of us. They all go to some pool party (men showing some skin!) and Lauren photographs hottie kissing Kaylie. This, from the girl who gets vajazzled by everyone daily... Has she slept with anyone's father yet? She will.
(P.S. click the link---people who don't allow embedding of their youtube videos are dead to me and obvious Jana Bieger supporters.)
Posted by OlympicEffect at 6:55 AM