Make It Or Break It: Winners 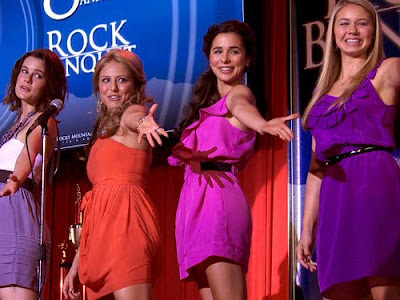 Winners. That's what the Rock girls are. Emily got her scholarship check (and a new white leotard) and Lauren, Kaylie and Payson all earned awards at the 'prestigious' Rock Banquet. Oh yes, gym awards are so meaningful. Notice how everyone won something, because that's how society is these days.
This episodes of Make It Or Break It questioned my resolve for making it through another episode.
Reasons why this episode pained me:
1. Sasha made a comment about being anti-marriage and atheist. Sommer is clearly going to be done with him, yet she gets herself drunk and the only move Sasha makes is a kiss. Next week, it'll be back to mild flirtation. Are these two going to get it on or not? Go to Vegas and get a quickie wedding already. I want to see Sasha doing the horizontal mambo in a pair of briefs. This born-again virgin routine is tired.
2. Chloe and Steve's storyline was pathetic. Are we supposed to be rooting for them? Steve bought his bratty daughter an award and even fixed the votes, yet no one saw. He even acted like an ecstatic fool when she won, even though he rigged it. Do any of these parents ever work? Doesn't Chloe have nails to paint? Isn't Steve some evil businessman? Some company he's running. His commitment and focus is just about as good as his daughter's. Lauren is nothing but a sociopath to Emily. Chloe realizes all of it and yet goes up and talks about what a wonderful girl she is because the troubled girl just needs to be understood. Spare me.
3. The academy award speeches were insufferable. Was this episode just a time killer in order to draw out the drama this season? We get a new piece of man meat and can't even drool over him. Are guys not allowed at the banquet? This show is so anti-men. Girl Power ended with the Spice Girls. Put away your platform shoes. The video with Nastia, Carly and Tasha talking about how effing inspiring Payson is killed me. Killed me. First off, Payson was supposed to be a junior when Carly was a senior...which leaves Nastia out of this timeline. Payson looks like she could've given birth to all of them.
4. Lauren intentionally spills a red smoothie on Emily's white leotard yet she fails to retaliate. Take her by the hair and show her some of your ghetto moves! Saint Emily is boring. Embrace your inner badass hooch. These characters are so beige. Perhaps Lauren was just doing Emily a favor, everyone knows that white leotards make gymnasts look fat. Enormous actually.
5. It looks like Becca Keeler will be joining the elite group. Becca's acting is so bad that she makes the main four look like award winners. If I have to hear about her telling Payson how she's her best friend one more time... I liked it better when she was called out for being the selfish bitch that she is. And why is Payson getting an attitude award? Girl got injured and cut class, screamed at everyone, acted all poor me, was a jealous bitch and is now crying about having to be an artistic gymnast.
6. Who else cringed why Sasha told Payson she had to do a cartwheel with pointed toes and straight arms and legs? Shouldn't she have been doing that all along? What is this, Parkettes? That would explain the career threatening injury...
7. Why hasn't Bela Karolyi made an effing appearance yet? All these award shows and the best they can do is Carly and Nastia? Bring out the big guns.
8. Kaylie is apparently going to be suffering from a big ass eating disorder because she is giving up froyo, cheesecake and smoothies. Um, that's being an athlete. Frankly, the obese children who watch this show should learn to give it up as well. America's young fatties don't need any encouragement.
9. The girls gave a musical performance that would cause any rational individual to ponder taking their own life. There was no need for them to sing to Sasha Belov. Get him a gift. Dinner reservations, new trailer furnishings, sex toys, anything... That musical performance wasn't a gift for anyone. Apparently the actress playing Lauren has some music contract. There really are no standards anymore.
10. Nothing happened this week. This episode was forty five minutes of my life that I'm not getting back. So Sasha and Sommer kissed...they've done that before. Lauren's been bratty. 90210 didn't get anywhere by giving Brenda an award. Give me an unwed teen mother or give me death! Lauren is capable of screwing with someone's vault settings to purposely cause an injury. Buying girls smoothies...what dramatic tension!
The hotties are back next week. Phew.
Posted by OlympicEffect at 12:41 PM