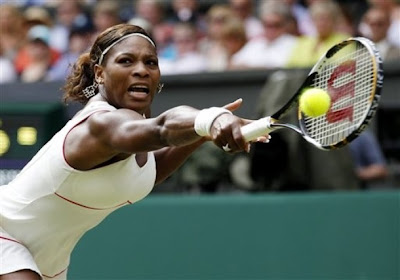 Serena has done it again! She beat up on her tempestuous Russian opponent, who the commentators enjoyed watching writhe in the presence of the master. They recounted her many outbursts, as though Serena is a docile creature. One could take Mary Carillo's descriptions of Serena as 'menacing' to be questionable if it Mary's lust for Ms. Williams wasn't so transparent.
When you're busted, you're busted. Damon Evans was arrested for a DUI this week. While that is a major mistake, it is his outburst and attempt to weasel his way out of it that is making headlines. A pair of red panties was found between Damon's legs, which he claimed to be holding for the 28 year-old companion in his passenger seat. Damon repeatedly asked to be taken to a motel. The arrest came minutes before his new contract was to taken effect, which would net him $550,000 a year. Read all about it.
Team Russia beat up on the world at the Japan Cup. Aliya Mustafina, Tatiana Nabieva and Koko Tsurumi will battle for the All-Around title tomorrow. On the men's side, it was Japan all the way, with Germany second and the USA third.
Posted by OlympicEffect at 7:22 AM