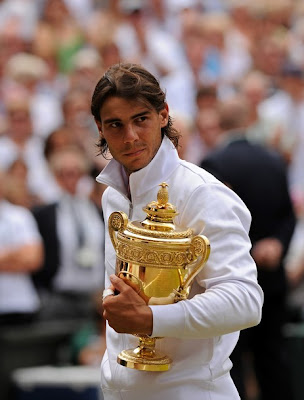 Rafael Nadal won Wimbledon in three sets and won the hearts of everyone yet again.
Kohei Uchimura defies brilliance. Above are his rings and high bar routines from the Japan Cup.
Studly Paul Ruggeri also proved quite impressive.
More videos from the Japan Cup are popping up on youtube.
Marlie spoke with Lifeskate about their upcoming season. The world is waiting to see what they will come up with next.
More examples of the short dance are popping up.
Gorshkova and Butikov
Alessandri and Vaturi
A Reminder To All: Nastia Liukin will appear on tonight's episode of Make It Or Break It at 10 PM on ABC Family. It is the Paris episode. Drama will ensue.
Posted by OlympicEffect at 7:57 AM