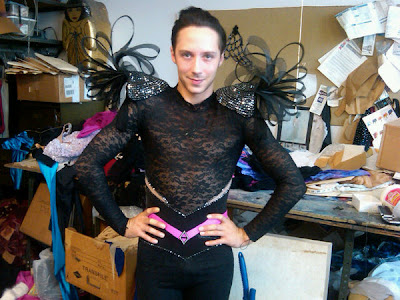 Johnny Weir debuted his new Poker Face costume. Remember when he was going to retire that program a year ago? I do worry about Johnny. While he was recently in Japan for a show, The Ice, one of the major summer skating shows (with lots of sponsors) is being held this weekend. Where's Johnny? He is doing an ice shoe held every week during the summer. There is already a rift between Team Weir and Yu-Na's management. That was some bridge to burn. Being absent from the major shows does pose a major red flag for his professional career. He could be a top show skater with innovative programs, but he is quickly treading in Lady Gaga sideshow act territory. When her overexposure backfires, where will he be?
Felicia Zhang made daddy proud with her short program at Liberty. Look at that Lutz! Tay better start working on his so they can rack up the points. He is certainly capable of doing one.
Chris Burdette spoke to gymnastike about qualifying eight gymnasts to Nationals.
The Thompsons have already visited Parkettes. During his tenure at PSU, Steve Sheperd did not actively recruit at Parkettes. PSU is in a situation where they need Parkettes more than Parkettes needs Penn State. It would even help building a crowd, as we know what a cult atmosphere the Allentown gym can be. Everyone under the sun is applying for the job to become the coach at Auburn. One can only hope that it goes to Bryan Raschilla. He has done the grunt work at Alabama for years and will be screwed over when the program inevitably goes to Dana Duckworth.
In case anyone was feeling delusional, Va Zam will not be performing 'the Cheng' at Classics. She will likely compete a layout pod. Zam discussed her routines in a recent profile. There is some concern about Zam performing a double layout on floor, as she crunched both ankles doing the skill. If Zam gets injured during her foray in elite gymnastics, it could spell disaster for UCLA. She certainly would no longer be the favorite of Miss Val.
Sandra Bezic is helping Brandon Mroz with his long program this season. Brandon did a genius thing by getting her involved. Tom Dickson will take care of the footwork and levels aspect of 'On The Waterfront,' while Bezic will inject her trademark emotion and stylistic details. We can only suspect that Sandra will be a major fan of all of her work when she commentates at US Nationals, just as she was smitten with her skaters at the World Pro.
Mary Beth Marley won both the short and long programs in the Junior B division at Skate Detroit. She remains a junior to watch. Just missing Nationals last season did not halt her progress.
Gymnastike is on hand at the Cover Girl Classic (US Classic.) Alicia Sacramone remains as delightful as ever. She will be competing a Layout Rudi and DTY. Aly Raisman will compete a piked double arabian.
Grace McLaughlin is injured and will not be competing at Classics or Nationals. She vows to be back for the 2011 season. This was her year to make the National Team and to start making an impact. Getting (and staying) healthy and upgrading next season are of the utmost importance if she is ever going to make an impact.
Reminder: The US Classic/ Cover Girl Classic will be broadcast LIVE on Universal Sports tomorrow at 8 PM Eastern Time. For those who don't get the channel, there is typically an online feed.
Posted by OlympicEffect at 9:32 AM