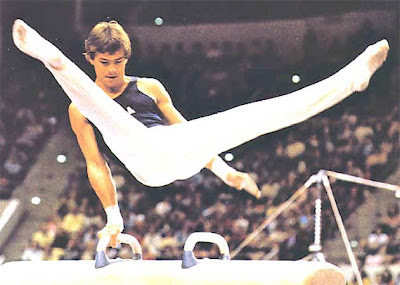 If you haven't caught on by now, I adore watching '70s and '80s gymnastics. There is something wonderful about watching gymnastics in its purest form. Before the sport became all about D and E scores, the gymnasts had line, elegance, beauty and showmanship. It was a time where Madison Square Garden packed a crowd to watch the best in the world show their stuff. Jim McKay and Gordon Maddox provided commentary with gravitas.
For many American fans, 1980 is a forgotten year. The 1980 Olympic Boycott is an unfortunate memory for all involved, but it is amazing to see how strong the Americans actually were. Kurt Thomas and Bart Conner were legitimate World Champions. Dreamy Kurt Thomas won titles at Worlds in Europe and the US. Both were expected to compete for gold medals in Moscow. Had they not been screwed by Eastern Bloc judges, Kurt and Bart would've become far more well known than they already are. In his day, Kurt Thomas was every bit as good as Paul Hamm plus looks and a personality. 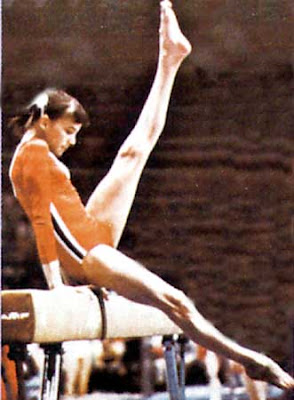 The American Cup wasn't always a joke where the commentators spoke about how prestigious the event is despite only hundreds of fans sitting in the stands. Tracee Talavera's performance at the 1980 American Cup was extremely impressive. Competing against Emilia Eberle, Marcia Frederick and Dumitra Turner, Talavera's break out pixie performance made it easy to predict Cathy Rigby status in Moscow.
Despite competing lesser difficulty, it is still readily apparent how innovative these gymnasts were. Talavera had America's Sweetheart/ Girl Next Door charm without being obnoxious like Shawn Johnson. Gymnasts weren't 'bulky' in the '70s. They ate their dinner of tears and smiled about it. Eberle gave away the meet with her beam dismount. Given her stories about Bela, one can only wonder whether he slapped her before or after they left the arena.
I've wanted to see this meet ever since I first saw abridged clips on my Gymnastics Greatest Stars tape. I learned the sport wearing the tape out and mimicking floor routines of Korbut, Comaneci and Boginskaya. This file isn't exactly complete coverage, but it is still a delight.
Gymnastics coverage that won't make you want to gouge out your eyes and ears!
Part 1
Part 2
Part 3
Part 4
Posted by OlympicEffect at 3:09 PM