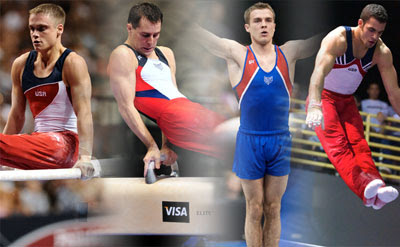 The US pieces of man meat will compete to qualify for Nationals this weekend. USAG is using a points based system to qualify for nationals, as lord knews we need to qualify some pommel horse specialists. 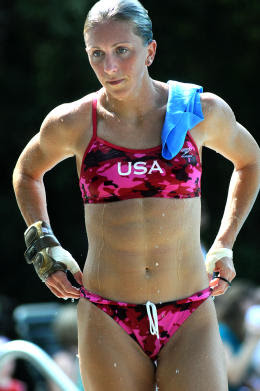 Laura Wilkinson is competing in springboard at the Tallahassee Regional Diving Championships and is attempting to qualify for Nationals. Laura hasn't competed or trained on springboard since she broke her foot in spring 2000, but she was having fun playing around and decided to have fun with diving while she is still physically able.
Georgia Bonora won the senior all-around at the Australian National Championships. Mary-Anne Monckton finished second and Shona Morgan finished third. Emily Little and Lauren Mitchell did not compete due to injuries but are expected to be a part of the Australian team at the Commonwealth Games and World Championships.
UNICEF's newest goodwill ambassador, Yu-Na Kim, is thanking those who donated to the Haiti relief efforts.
Gymnastike posted a list of competitors for the Cover Girl Classic (US Classic). As of now, Kayla Williams and Alicia Sacramone are scheduled to compete. Sam Peszek and Bridgette Caquatto are notably absent from the list. Caquatto is still recovering from a knee injury.
Rachel Spicer has indeed followed Marnie and Gina to Metroplex. Without a strong level 10 program, Texas Dreams faces the possibility of being the gym where washed up WOGA and GAGE careers go to die.
Posted by OlympicEffect at 7:57 AM