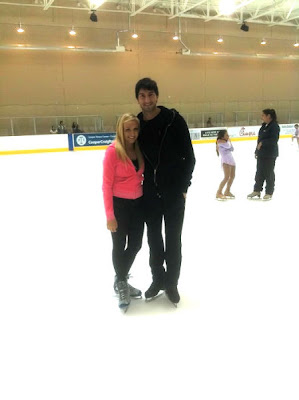 Nastia Liukin took a skating lesson from Evan Lysacek as a promo for the skatenastics craptacular. Universal Sports has a photo gallery. Nastia shows off that as expected, she has enough flexibility and is enough of a complete bitch to be a fabulous figure skater like Sasha Cohen. Nastia interview Miss Evan. Like it or not, we are stuck with her as a commentator. Hmm, you think Nastia could afford to buy real figure skates. I want to see a number with her doing a fabulous spiral.
Alaina Johnson was the first gator to get her new floor routine today. Rhonda's main gay felt quite inspired and the routine promises to be one of the most anticipated of the season. It is said to be funky, eerie, dark and sexy with plenty of leg action. Alaina, who has the legs of a goddess, has a sexy leg ending pose, a needle turn and lots of footwork action. She is a sophisticated Hartung with a nasty southern drawl and the audience will love it. Alaina is in great shape and expected to mount with a double arabian and end with a double pike. Most of the gators appear to be in superb shape, with the exception of Randy who continues to struggle to regain top form.
Marissa King will represent Great Britain at the Commonwealth Games.
CGA had a visited from Allison Arnold this week to 'tighten their minds.' The visit is curious as Allison aided CGA in the '90s and produced a rather curious result. It turns out that one of Sapunar's numerous injuries was more of a psychological one. Sierra Sapunar had been struggling with a skill when Dr. Arnold had her imagine everything that could even go wrong on a simple skill like a back handspring or roundoff. The result was a paralyzing fear. Hopefully Dr. Arnold did not give Whitcomb any beam tips.
Video of Walter Toigo, the Italian judge from the Courchevel JGP, is making the rounds online as he is shown copying the marks of the judge next to him. It certainly shows why anonymous judging is complete bullshit.
Drama is heating up at UCLA between Anna Li and Miss Val. This is not the first time the two have clashed and certainly not the first time Miss Val has butted heads with a former gymnast. Anna Li, as rumored, has indeed been training at AOGC to get back in shape and possibly make a run at 2011 and 2012. The UCLA coaches are quite against this as they feel it could hurt recruiting and appear that they are not able to train someone able to make a US Olympic Team. Given how trying a situation doing both NCAA and elite is, it is highly improbable that an athlete would truly be able to do both simultaneously. Martha wants what she wants and isn't going to let a dual meet get in the way if she wants an athlete at a particular competition. Given that Anna's best shot is as a bars and beam specialist, Galina Marinova might just be a slightly better suited beam coach to get her to where she needs to be. AOGC's rigorous diet wouldn't hurt either. Martha likes them thin.
Evora and Ladwig will be skating to Nessun Dorma this season. They have chosen to work with ISU Technical Specialist Judy Blumberg on improving their levels. Blumberg has labeled the two "hackers" and is working on vastly improving all areas of their skating.
Texas Dreams showed gymnastike how they used an inclined air track to improve their tumbling.
Yu-Na Kim will now be training at the Granite Club. She will also be working with Shae-Lynn Bourne on her new short program while skating at the club.
Posted by OlympicEffect at 7:52 PM