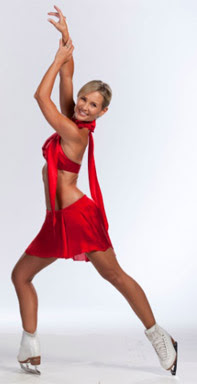 The season two cast of Battle of the Blades has been revealed.
The figure skaters: Violetta Afanasieva, Isabelle Brasseur, Shae-Lynn Bourne, Ekaterina Gordeeva, Christine "Tuffy" Hough, Kyoko Ina, Anabelle Langlois and Jamie Sale.
The hockey players: Patrice Brisboise, Valeri Bure, Kelly Chase, Russ Courtnall, Theo Fleury, Georges Laraque, PJ Stock and Todd Warriner.
There is buzz swirling that the American version of 'Dancing On Ice' could be coming to ABC as early as this fall. It certainly makes sense, as last season's pro competition was easily a test run to see how skating could be produced, promoted and received by the network. It would also explain why there was a lot of interest in Johnny Weir by the network, which fueled rumors for Dancing With The Stars. While the initial fall schedules are set, the show could certainly be a mid-season replacement (which are always planned in advance.)
Miss Val was interviewed for the latest episode of Bruin Talk. Her segment starts around 14:50.
IG interviewed Glen Ishino.
Yu-Na Kim landed in Los Angeles earlier today. There has been a rumor going around that Naomi Nari Nam will somehow coach her due to them both sharing Korean heritage. This began as commentary/speculation by the Blazing Blades Blog. This is a bit bizarre and has even become a rumor on message boards. NNN has had success coaching young skaters, but she is an inexperienced coach and is not ready to handle someone at Yu-Na's level. Her own technique was questionable at best. (Remember her toe jumps?) The East-West Ice Palace will likely serve as a private facility to host coaching tryouts as she relocates. Michelle Kwan was able to train there and attempt a comeback without daily reports of her training appearing online. Yu-Na will probably work with Peter Oppegard in the interim, but I would not be shocked if she has a tryout with Rafael Arutunian in the next few weeks. He is certainly a coach with the ability and clout to get her season and career back on track.
Lynn Rutherford interviewed Michelle Kwan for Ice Network. MK announced that she will perform "Winter Song" and "No One" at All That Skate LA.
Johnny Weir will appear on tonight's episode of The Rachel Zoe Project.
The leader of Munich's 2018 Olympic bid stepped down, which leaves Katarina Witt with a much larger role as bid chair. If it comes down to Katarina having to meet with IOC leaders and seduce them to vote, I'd bet on Germany getting the bid. Miss Witt will always find a way to get her way.
Reports are swirling that the ISU will make an exception for reconsidering Evgeny Plushenko's eligibility if the Russian Federation will 'guarantee it.' It is amazing how much things have changed. The ISU is apparently sorting his contribution to the sport. They certainly didn't care about Boitano's when he desired to kick some ass at the 1992 Olympic Games.
Posted by OlympicEffect at 2:11 PM