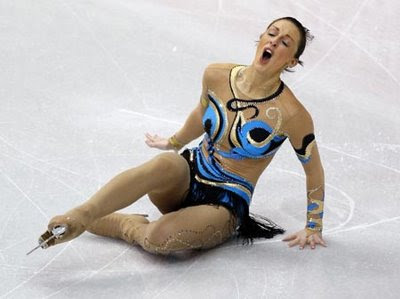 Aunt Joyce made a rare appearance today: in an ice rink. It has been several months since I've tortured the ice with my presence. I've been itching to get back on the ice, but my schedule had taken me away for song long that I was afraid of the level of hot mess that would ensue.
The skating addiction is a funny one. For one, it is absolutely true that the sport draws in intense, neurotic, obsessive-compulsive nut jobs. The moment I get on the ice and start having the ability to do something, it feels like a craving that one can never get enough of. Ice has a way of providing a feeling of freedom and wind that I crave. It certainly agrees with my sweating issues.
Today, I just worked on getting my edges back and doing good crossovers. I snuck in the occasional ina bauer variation because I am definitely an ice queen. That said, it seemed like my return to the ice would be rather short-lived after 10-15 minutes into the session. My feet were KILLING me. This happened the last time on the ice and I thought: Did I buy the wrong skates? Do they need to be punched out?! Is this how it is supposed to feel?! No wonder Johnny doesn't do full run-throughs!
It turns out that after time away, I always think that I need to tie my skates as tightly as humanly possible. They just can't. get. tight. enough! It turns out that this tends to cause a little pain. After wussing out in the penalty box and retying them, my ego took a severe beating when an 80 year-old man asked me to hit play on his music for him. After being shown up by a senior citizen, I was ready to go. (Note that it still takes me forever to tie my skates.)
I was just starting get into my groove when a wonderful Asian skating mother got my attention. Being a physicist, she was helping her daughter with her footwork and spins. (I later came to learn that she calculated her daughter's base value to make her almost unbeatable in Intermediate.) "Are you Aunt Joyce?!" "You love all of the Asian girls!" "I knew it was you!"
Now you know I was feeling like Sasha Cohen did at Nationals when I was approached. If only I didn't have those extra two pounds on my stomach! The AP scholar in me makes me want to show my best to my Asian heroines. I immediately started pushing myself harder once I saw her daughter rock a straight line step sequence that was clearly designed by an ice dancers.
I went back to working on my two foot spins and eventually attempted crossovers on both sides of the body. Way for God to make one side of our bodies so much stronger than the other! Great design work on that one, big guy! For the record, my counter-clockwise back crossovers just never feel like cooperating. We maintain a difficult relationship. I even got a little crazy and rocked some waltz jumps. I know, I'm out of control.
As with any good session, the fun didn't end on the ice. While talking to one of my new favorite skating mothers, she challenged me: Who do you like better, Mao or Yu-Na?!" The pressure was one to establish my flip-flopping nature regarding those two! I may have even been sweating a tad. It is good that I was wearing prescription deodorant.
While chatting and putting away my skates, another inspiring skating mother (this one from Franklin Lakes---home of the Manzos!) interjected with one of my favorite quotes I've heard in a while.
"When people watch Rachael Flatt, they really get the sense that ANYBODY can be a figure skater. I'm sure she's inspired a whole subset of people to take up the sport."
P.S. The lovely Level Four Skating Mother won my eternal love when she let it slip that she coordinated a trip to the 'Michelle Kwan Rink' when vacationing in Los Angeles. They just so happened to find a hotel five minutes from the East West Ice Palace and even made the thirty minute drive to skate at the Toyota Sports Center with Frank Carroll. Clearly, this is something we all need to be doing when heading to the West Coast. If the Kwan's really wanted to make money, they just should've put the rink in West Hollywood, where all of Michelle's fans reside.
Posted by OlympicEffect at 2:37 PM