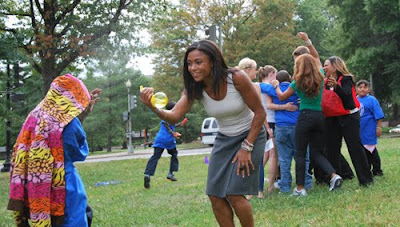 Dominique Dawes is the Co-Chair for the President's Council on Fitness. She took part in an event on the White House lawn yesterday.
Our first look at the Crimson Tide aka Fat Bama. Note how large their freshmen class is. Sarah Patterson's M.O. is always to blame any loss on the fact that the team is young. In reality, replacing 6-7 gymnasts at one time is a huge risk for any team and one that comes down to questionable recruiting decisions. There will be far more gymnasts available for the 2012-2013 season, which makes already having 9 freshmen this year an interesting choice. Then again, this is Alabama and the gymnasts have certainly displayed an ability to leave. Jennifer Iovino, who did not compete at Alabama due to a health condition, is now a star for the University of Maryland. As always, Sarah Patterson looks like the Wicked Witch of the West.
Christa Greinke was arrested for a DUI and fellow Ball State teammate Julie Cotter was cited for underage consumption of alcohol. It has yet to be determined what disciplinary action will be taken by the athletic department. Given that both have been valuable team members, it is unlikely that they'll be dismissed from the team for a first infraction.
Nadia Comaneci gave Yu-Na Kim advice, if you could call it that. Her English was incredibly poor (she hasn't learned a thing over the years) but it looks like she thinks Yu-Na should continue if she still has a passion for the sport because she has more to achieve. Then again, Nadia is one who came up just shy of a repeat Olympic AA Title and was quite bitter at the time.
Several training videos of Vanessa Ferarri are posted on this youtube channel.
Action got underway at the JGP in Austria.
Results: Men, Dance, Pairs
JGP Austria videos are available here.
Ariella Kaslin has been hindered by a virus and is in a race to get her full difficulty back for Worlds.
Paul Wylie checked in with Ross Miner for Universal Sports.
The trailer for RISE:
Several USFSA champions (Scott Hamilton, Dorothy Hamill, Michelle Kwan, Peggy Fleming and Brian Boitano) are lending their voices to the RISE documentary. Information about the premiere is available on the new website. The film will be in theatres for one night only: 2.17.11
Posted by OlympicEffect at 8:04 PM