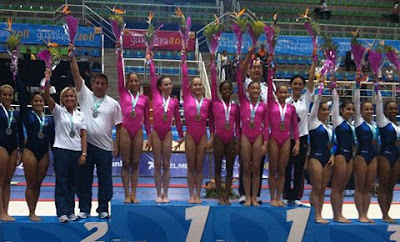 The American juniors dominated the Pan Am Team competition, only beating the second place Canadian team by 19 points. The Canadians sent their top guns, which makes the victory more impressive. McKayla Maroney is proving why Alicia Sacramone will have to work her ass off if she wants to return to the Olympics. Maroney nailed two different vaults today (Amanar and Layout Pod.) If she can continue to upgrade, Sac will have to hope that McKayla becomes quite the All-Arounder. Kyla Ross won the AA with a 57.998, followed by Vega with a 57.663. Jessica Lopez was third with a 57.099.
Event Finals:
Vault: Maroney
Uneven Bars: Ross and Douglas
Balance Beam: Dowell and Vega
Floor Exercise: Maroney and Ross
Charlotte Mackie even managed to make an event final thanks to the two-per-country rule.
USAG will now sanction cheerleading. This will make them a shit load of money. Perhaps everyone you know will no longer be able to claim that they are a National Champion in the sport.
The Examiner interviewed Beth Rybacki at Nationals.
Johnny Weir on The Rachel Zoe Project:
Rehearsal videos from Artistry On Ice have been posted, including our first look at Mao Asada's new short program.
Posted by OlympicEffect at 9:02 PM