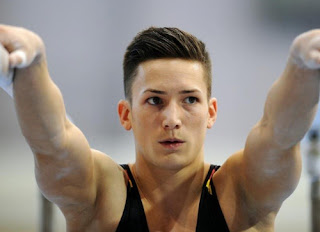 Well here we are. Final day of artistic gymnastics at these Olympics! Catalina's Leo is ready for beam and floor!

Parallel Bars start off the day.

First competitor is Zhang from China. Falls off on his peach half. Boy are these advertisements on NBC's feed annoying.

Feng Zhe up. Shannon Miller says he can take the gold here. He's happy with his routine. Do we get a commercial after every routine? Sigh. 15.966! Looks like he's the one to beat.

Here's Marcel. Great routine with an unique full-twisting double back dismount. 15.8 to go into 2nd.

I'll be back in a minute. Have to restart my computer because it keeps crashing.

AJ here in time for beam. We can only imagine how strong the bitch face of Viktoria Komova will be today and whether or not she will force herself not to bobble based on the sheer force of her bitchy personality.

It was wonderful seeing Marcel Nugyen on the podium and imagining my hair ever looking that good. Alas, I freak the moment mine touches my ears.

"This techno Chariots of Fire is very '90s."-Uschi Keszler

Iordache has been subbed in for Bulimar.  Given her shaky performance due to her injury, we will wait and see if it was worth it or as futile as Belu throwing Marinescu a bone in Atlanta.

Our Chinese daughters have not performed up to expectations these games. Will it be back to the orphanage after beam finals?

I love the BBC

Sui Lu hits a fantastic beam set. Just one step back on her back pike and a little low step forward on her double pike dismount. It looks like a medal for sure. She surely did this to ruin Komova's day.

Ponor has been worthless in World and Olympic competition since her return. She has hit every small competition (even Euros), but the pressure of what is at stake has gotten to her every time. She wobbled to a 2 1/2 turn to start and you knew it was over. Bitch never makes these errors. My inner Peggy Liddick is coming out and ready to be nasty to her. Why bother? Where is your mojo?  Much too high 15.066.

Deng Linlin rocks a set to capitalize on Ponor's bad day. It is amazing how she has all of the Chinese form and technique, yet none of the artistry or flair. It looks almost boyish.

"The Chinese girls are competing for their half cup of rice for supper."-Uschi Keszler

Iordache pulls a Marinescu and is off on her back full. Grandma could've done better than that.

At least we didn't have to pretend that Grandma is good.

Afan- looks draggishly stunning and makes an unnecessary wobble on her barani. Big steps back on the double tuck. I love him, but he is just not at the level of the beam final. My love for the Russian leotard knows no limits.

"First man to place his balls on that beam. He did about 12 leaps and 1 tumbling pass to avoid hurting the family jewels."-UK

Will the real Gabby return on beam?  The answer is yes.  After the switch 1/2, the world has returned to its usual order. First AA champ not to medal in individual apparatus finals.

She needs a nap.

Komova looking lovely in my favorite leotard. And she bobbles on the L turn. Off on the punch front and just looks over it. Misses the dismount and says fuck it.

"She is going all Britney circa 2007 on us. I really fear for her life."-Uschi Keszler

Komova doesn't even look at her score and checks her manicure. True diva bitch. God love her.

Aly- :"Uh oh, they call her punchy. She's been anointed fat by the Brits."-UK. If she medals with this piece of shit...

The judges deduct for all of the lack of split and amplitude in the routine. The general public is going to cry foul. NBC is going to pounce all over it. Ponor's score was extremely high, but Aly's was extremely disgusting and offensive to anyone who ever took up anything related to the world of dance or stretching.

I can't feel that sorry for Aly Raisman. Given her level of disgustingness, it is a Hughes-family miracle that she is an Olympic Champion.

Mihai is protesting. The issue is that Aly was scored appropriately, yet Ponor was gifted.

The BBC is showing equestrian. I didn't know the British girls were in another event final.

Some will debate whether Aly was robbed. I say that if we had compulsories like we should, girlfriend would never even make the Olympic Team.

If anyone is being robbed, it is Sui Lu. Deng Linlin has always been a member of the Hughes family.

Like a true future attorney, Raisman submits an inquiry for bronze and is accepted. Someone file one for Sui Lu. Have Raisman do it...she really only has one option for a future profession. She certainly isn't going to be a dance teacher.

Is Mr. Raisman an attorney? I have suspicions he is EXACTLY like Mr. Hughes.

My feed is now showing wind surfing. I am missing Cata's beautiful reaction.

Shawn Johnson to Deng Linlin...the real prize needs to be Balance Beam silver unless you want to lose your lunch.

"Will Leyva get a root canal on high bar again?!"-Uschi Keszler

Personally, I'm a fan of canceling the medal ceremony when people perform like they did in vault and beam finals. Nelli Kim needs to run down, shake her head and say, "Just, no."

Danell is as amazing on high bar as Yin Alvarez is insufferably annoying. The step on the gold should keep another Robin Wagner from coaching an Olympic Champion. 15.833. Danell is a tad big and sloppy up there...crooked on several handstands.

Zhang Chenglong needs a Biore face strip and the routine hasn't even started.  He rocks his set and is off balance on his dismount, but holds it. 16.266.

HUGE routine for Fabian, the male Anna Pavlova. Will the hop kill his gold chances?

"Hamburger is getting the crowd to chant 100% pure beef."-Uschi Keszler

"So will Zou Kai Raisman-Hughes his way to a gold medal?"-Tarasova's Mink

"The judges loving it. No vegans on this panel."-Uschi Keszler

Now, Netherlands Mop Head may have done it!!!!

Another gold record for the Flying Justin Bieber Monkey...16.533.

Jonathan So Yesterday Horton had the routine of his life going until the step back on the dismount. Peggy Liddick would like to let him know that he did the same thing four years ago.

"High bar has turned into a dick swinging contest and Epke has a 12-incher. I'm feeling it."-Tarasova's Mink

"I want Epke to top Fabian."-WestPalmBitch

Let us cheer on Afanasyeva and Izbasa so that none of the butch American girls end the Olympics on a sour Shawn Johnson note.

"I am more prone to the twin haircuts of fellow Germans Boy and Nguyen. Hamburger is a bit too beefy."-Tarasova's Mink

"I'm ready to get a fever. I need a fever to make me delusional so I can get through Wiebersaurs. Ponor is going to BRING IT after Raisman overshadowed her."-Uschi Keszler

"I can't wait for tonight's generous coverage of men's high bar, where we will see Leyva, a replay of Leyva's bar routine in the AA, a replay of his fluff piece with Seacrest and then an instant replay the gold and silver medal performances followed by the final standings with an unseen performance by the bronze medalist."-Tarasova's Mink

"Do we think Maroney has been feeding Izbasa Kalteen bars in preparation for floor finals?"-Tarasova's Mink

"There was just too much testosterone in that floor today."-Uschi Keszler

I hope Ksenia goes Zamo on us and sticks around for another eight years past her sell-by date.

And Jordyn flies back. Grace be to God. I judge that Dvora Meyers for talking up this piece of shit. Bad double pike landing. OOB on the second as well.

"The men are just not wanting to stay confined to the floor today."-UK

Raisman is about to be Olympic Champion. LOW split leap after the piked double arabian. The triple full is just getting around. It is going to be difficult to top that.

Ponor is rocking dance of the old whores.  This is reminiscent of Pam Anderson trying to prove that she still belongs on the cover of Playboy. 15.200

Lauren Mitchell- I haven't missed her these Olympics. Laughable leap out of the second pass. Stumbling about. Stumbled out of the third pass.

Douglas and Raisman may have an Individual Golds and Maroney may not...something is wrong with this picture.

"I detest Mitchell. Lisa Skinner and I are pissed that she is a World Champion on floor."-Tarasova's Mink

Vanessa looking disgusting again. This piece of shit may medal. I can't deal with what Mother Nature has done to her, but she doesn't make it any easier with her leotard choices.

"I love that she owns her trashiness."-Tarasova's Mink

Aliya is nailing this like the fierce bitch that she is. Why can't she stick or leap out of the double tuck:? It isn't like she's special like Jordyn Wieber. Rocks a triple full in the tuck position to close. Please put her ahead of Ferrari.

"Aliya only has a 5.9 if I recall. Of course, if we are grading on a Raisman execution curve, this routine will earn an 11."-Tarasova's Mink

Thew Raisman-Hughes Jewish miracles continue. Hanukkah really does go on for eight nights when you consider the world was made in seven days.

And now half of the annoying gymnastics fans on this blog prove they are merely patriotic and have no taste.

"Congratulations, McKayla. Your future in the dark arts looks promising. And to wait for the final pass, too. Cheeky."-Tarasova's Mink

"I can see that smirk right now."-Uschi Keszler

Well, at least Aly kept us from having to deal with Geddert in All-Around finals. I guess we can throw her a gold medal for keeping that Robin Wagner moment from happening.

I'm so disgusted, I'm going to consume calories.
Posted by Laura at 6:04 AM