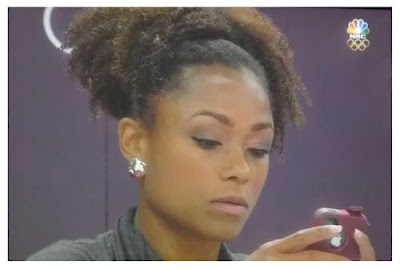 Diva Dawes is going all natural like Tyra. We all knew that Dawes liked to name her own skills as a commentator and latch onto Michelle Obama, but we had no idea what a self-aggrandizing diva she was until these Olympics. Dominique and her hair glitter were inspiring Gabby Douglas in the womb, thank you very much.


Dawes goes one-on-one with 'Golden Gabby.' Dawes has decided the Flying Squirrel is racist and wants to bring the attention back to Gabby's accomplishments, even though she won't refuse an opportunity to make a bigger deal out of the Gabby hair fiasco since it gets her mug on TV and her name in the press.


Maurizio Margaglio is helping Team Canton with their short dance technique. In future news, Nicole Bobek and Tonia Kwiatkowski will be brought in to help Yu-Na Kim with her Lutz technique. Marina says Voir will be 'dramatic.' Could the Carmen rumors be true? There are certainly rumors about Igor being pushed out (even by dissatisfied parents who invest in the rink and that Marina has possibly wanted it for some time), but everyone was 'on vacation' as Igor was rumored to be mentally for several months.

Q+A with Evan Lysacek. He is already delivering the toolish quotes by stating that Samson and Delilah is 'outside his comfort zone.'


Jenny Kirk helps us to regulate our eating.


John Orozco put too much pressure on himself.

Gabby reveals that Martha is superstitious about pink leotards.

Chatting with Piper and Paul

Posted by OlympicEffect at 12:34 PM