The Return of Evan Lysacek


We knew this was coming. Like termites, Cher and a good case of the clap, we will never be rid of  Evan Lysacek. Frankly, it isn't surprising...we knew he was training and that things were getting serious when he hired Shep Goldberg to be his agent and sort out his issues with the USFSA. We knew the Johnny-USFSA love affair could not last. He could not truly be their golden boy. (Note that Mr. Lysacek has already been given Skate America.)

The thing about Evan is that he trains. He trains really hard. These two years have likely saved his body, but he will absolutely need the quad he claims to have. It needs to be rotated.

Jeremy Abbott and Adam Rippon have not performed at an acceptable level internationally. The American men have become on par with the Canadian ladies who celebrate top ten finishes and dream of earning a spot in the final warm up. Now, these boys can go back to being the skaters we enjoy because we expect nothing from them. Without having to rely on Jeremy to bring home a medal, we can enjoy his wonderful edges and experimental programs.

Evan and Johnny are two consistent skaters. Evan has the ability to challenge for titles due to his consistency, components and ability to soak every little point out of every single little element in his program. His speed and strength are enough for the judges to overlook the windmill arms that have plagued his skating for years.

Lysacek truly is the gift that keeps on giving. Between his hot body, horrible interview personality, on-and-off relationship with Nastia and other emaciated breastless blondes and new WTF relationship with Vera Wang, he is going to energize the sport and keep us entertained. The costume choices will certainly bring back the black while adorning it with feathers and glittered phallic symbols. In the mean time, Evan will hold the Americans over until Joshua Farris and Max Aaron are ready to dominate...and the rare hope that Jason Brown may one day land a triple axel.  If we want any skaters we actually enjoy to be in Sochi, we need to use the giant tool to get us that third spot back. Oh Evan, we've almost missed you. 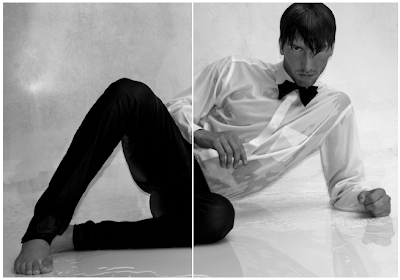 Posted by OlympicEffect at 8:09 AM