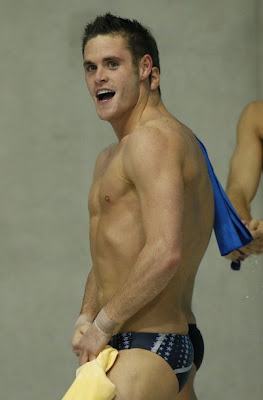 It is the final night of the Olympics.The artistic gymnasts are long gone (apparently they have to pay to stay in the village after they compete), but now it is time for the American divas of the track, the rhythmic gymnasts and the hot bottoms diving the platform. It is a night of obscurity and Olympic fever.

Earlier today, we watched the women of RSG out hoop and club one another. Evgenia Kanaeva reigned supreme yet again, as if her powerful coach and politician would allow it to finish any other way. It is much more pleasant to watch and appreciate Zhenya when you don't have the overwhelming sensation that the beloved Anna Bessonova is being screwed left, right and center. It is about time they allow these Russian women to compete in leather jumpsuits and replace the ribbon with whips and chains.

This week, the Russians dominated synchronized swimming. The sport has changed to become far more technical than the beautiful '90s routine the Americans earned perfect scores executing in Atlanta where they recreated the orchestra in the water and acted out the string section with their beautiful extended legs.

Yesterday, we learned that Catalina Ponor is engaged to hunky Tommy Ramos. That lucky bitch.

David Boudia is bringing glory to God with his stunning semifinal effort. I live for NBC's splash-o-meter.

I live for NBC covering over Tom Daley's speedo with their graphic, making him appear naked. My pervish friends enjoy all of the images of him showering himself for the cameras. 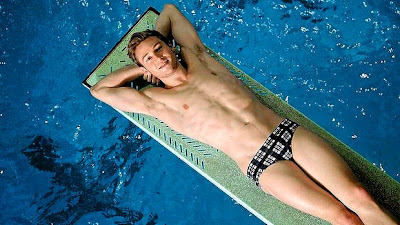 Matthew Mitcham appears to have enjoyed his Olympic experience based on his Facebook feed, yet he appears to have spent more time enjoying grindr and preening for the camera than perfecting his time. He is far too pretty to miss the finals. We've already had the heartbreak of beautiful Thomas Finchum missing the Olympic team.

Nick McCrory gives off 'top' vibes with his demeanor. He is certainly becoming quite the diver.

If Tom Daley can survive competing at home, his future will be brilliant.

Matthew Mitcham's fifth round dive was sloppy. One can tell is it bad when Cynthia Potter decides to give us background information about his start as a trampolinist.

Nick McCrory's one foot is larger is more extended than the other. It isn't quite reminiscent of Mark Ruiz diving with one foot flexed and one foot pointed, but it does look slightly off compared to the clean execution of Boudia, Mitcham, Finchum and the glorious Chinese.

The gay flakes are mostly keeping it together today unlike how they queened out during the preliminary round. Unfortunately, Mitcham has the vibe of one who will finish just short of finals.

I'd buy whatever Tom Daley is selling.

I love that Matthew Mitcham gives us just a hint of scruff to make up for his missed final dive. And there come the tears... He is quite charming.

Is this a new Secret commercial with Alicia falling in Beijing? We almost forgot about her this fortnight.

I love that they all change speedos for finals later in the day.

David Boudia is a sturdy machine today. I love his cocky walk with his subtle ass shake.

I live for the Chinese kick-out and ripped entry display by the Chinese. Wu Minxia is not living for Qiu Bo's effort. Frankly, she could own him.

How do we feel about Sparkle? Are we seeing it for nostalgic purposes? Will we pretend Whitney is amazing and sounds amazing regardless of how movie-of-the-week her acting may be?

Does anyone take issue with the on-deck diving breathing down their neck on the platform steps? There has to have been a Johnny and Evan situation where one is whispering choke! as the other attempts to focus.

Look at baby Tom Daley's flexed feet in Beijing. He has certainly improved and is sexy and he knows it. Luckily, the Brits celebrate a medal of any color. 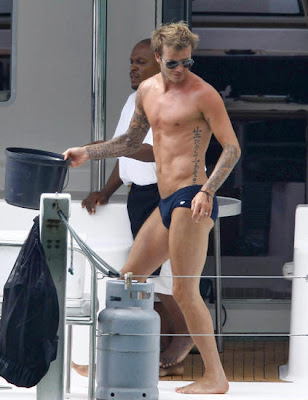 David Beckham approves. Now he is someone who should do us all a favor and don a speedo in London.

David Boudia is having his own Laura Wilkinson miracle. Praise God. Do we like his personality, or simply his diving and looks? He certainly gives off the 'closed-off-to-not-seem-gay' vibe. His diving is certainly incredible.

Qiu Bo is not as precise as Boudia today and it shows.

Bitchy Sister is here not really paying attention, yet thinking the divers are going to hit their heads on every single dive. "Oh my God! Oh my God!"

Nick McCrory...little arch in his entry. Feet could be better.

Boudia and Daley would be a gay-tastic synchro team. Thank you, Cynthia.

I live for how low Daley lets his speedo hang on his hips.

David Boudia...has the pressure of being in first. You know he watches that scoreboard. He is DRIVEN like Lysacek. Gorgeous kick out. Fabulous. Splash-o-meter likes it! So does Cynthia!

I live for Tom Daley's perfect nipples and perfect dives. Cynthia has shouted FABULOUS enough times to be dancing at G-A-Y.

David Boudia is NAILING this. To HIM be the glory.

"She doesn't bitch about the splash this time?"-Father Knows Best on Cynthia Potter

My favorite Cynthia Potterism has to be 'sliding past vertical.' Aren't we all in life?!

I love that Daley is enough of a diva to demand (and get) a re-dive.

This is it, bitches...Daley nails it. Cynthia has seen him do it fetter. We'd like his feet to be prettier and more Asian. 8.0-10.0, sizable spread.

Boudia wins! Praise God!!!!!!  Did an American seriously beat the Chinese wonder-kid by a hair?! No. Way.

Sweet Laura Wilkinson is crying and so is everyone else.


The track divas are going to WIN! 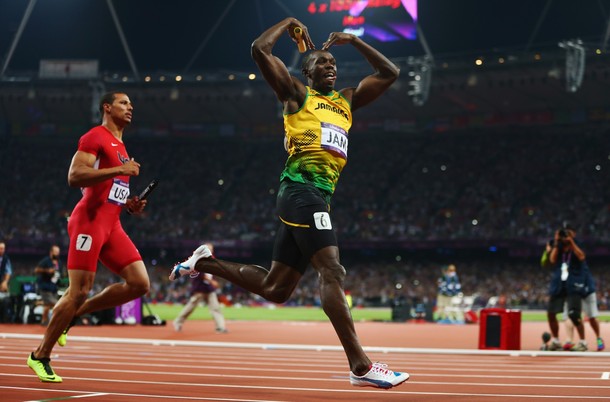 Posted by OlympicEffect at 6:20 PM