Zhang and Bartholomay are killing it on the summer competition circuit. A Nationals medal looks like a strong possibility. Both Felicia and Taylor look much better with their new partners than they ever did together. Leaving UDel has really helped both. Felicia's technique is miles better and she is in far better physical condition. Growing up and being in love with her partner has really helped Felicia emote on the ice. She is now doing better than beloved bitchy Kyoko Ina who was only ever good for looking constipated or hatefully glaring at either of her poor partners.


Baga and Toth's second outing. They have just completed all of their tests and have had little time to train for this season. The two divas work well together. Like a true homosexual, Taylor has clearly chosen their music for this season (Sasha Cohen's 2002 short.) Kiri and Tay almost performed their side-by-side triples at the same time, which they didn't do last week and he NEVER did with Felicia.

Pre-season chat with Voir. They discuss the post-Olympics crash. Tessa really looks stunning. PJ Kwong attempts to make this all about herself and tries to imagine that she and Tessa Virtue are the same person. Sadly, we learn nothing about the split with Igor or their new programs. 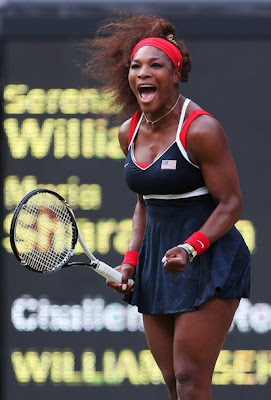 Serena, always a classy bitch, dominated Sharapova 6-0, 6-1 before earning doubles gold with sister Venus today. Girl isn't used to playing so many tournaments in a year...it looks like she is actually in shape and just getting warmed up for more beastly success. I lived for the moment where she pretended to be dainty following her singles win and then reverted to quite the victory dance. Given how they proclaim to be devout Jehovah's Witnesses, I live for them playing in the Olympics to begin with. My childhood neighbors had issues playing recreational town soccer, let alone with an American flag on their shoulder.


Between Ryan Lochte's mother saying he prefers one night stand and his own boasting that he peed in the pool, he is quickly becoming a hot mess to remember.

Dare Maxwell training Downies. I want to start seeing some half sets at least.


Vise and Baldwin...whatever happened to Free Rena? Did she ever manage to escape?


Moore-Towers and Moscovitch..."she is the epitome of the Canadian ladies level of suck."-Drunksana


Donlan and Speroff skate to one of my favorite pieces, Lady Caliph. They are trying the side-by-side Triples, yet you know it is going to be a major struggle all year long. As long as they get them by Sochi...


The Golden Sisters on their favorite sport.
Posted by OlympicEffect at 3:44 PM