I've been informed by master Aunt Joyce that I need to do a This and That post, but it's really hard to write a post when the skatnastics world has been literally dead in the past couple days. Either Hurricane Isaac has swept away most of the world already or time stopped watching Mitt Romney's speech...

Anyway, I suppose the big news is McKayla Maroney's stardom points keep escalating and she says her freakin' fibula was broken or something....as well as her toe. Girl is broken. She is set to present at the VMA Awards on Sept. 6. In this interview on EXTRA, Maria Menounos is a total flake and the two of them together make for quite a scene.


In other news, words cannot describe this rap song dedicated to Jordyn Wieber. Jay-Z got nuttin on dis.


The JPG in Lake Placid is this weekend. Hot mess pairs and our twinkie boys skated their shorts today. Joshua Farris showed his fighting form so far this season with a great skate. USFS needs to be pampering this boy. With a solid triple axel and working quads, he is our next hope after the Evan-Johnny-Jeremy messes are gone. While this costume screams Matrix, Bach is a nice choice for him.

Diva Kiri Baga competes in the ladies short tomorrow. This season will be telling for her as she tries to juggle both pairs and singles. 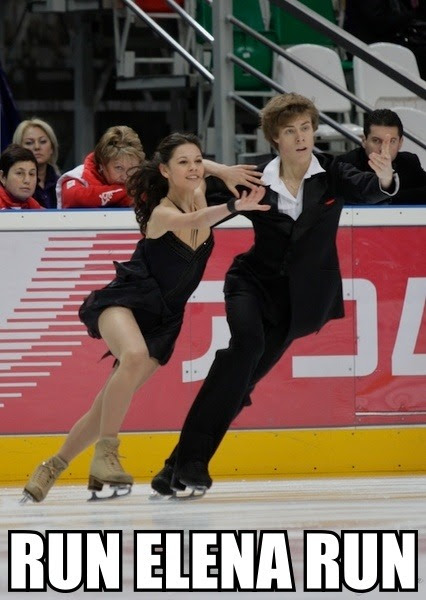 In other skating news, a translated Morozov interview reveals he is a major tool. Oh, wait, we knew that already. He says that if his team Elena llinyk and Nikita Katsalapov aren't in the top 3 this season, they might as well shrivel up in a hole and die because Morosov's politics aren't as good as they once were. Apparently he is still dating Elena (who just recently turned 18...she likes her sugar daddies).

Ice dance will certainly be a blood bath this year. I have a feeling that with the way the politics are working this season, Davis/White and Virtue/Moir may not be fighting against each other. These two, plus the Russians, Weaver/Poje, and the French should provide a fierce top five show.

The interview also confirmed Daisuke Takahashi's symptoms of battered woman syndrome by returning to Morozov after two seasons away.


During Champs Champ last week, the annual "team building" event took place. Their duty was to create a "rhythmic gymnastics" routine. Our country's top figure skaters showed their true colors in these routines. It is very interesting to note that Evan appeared at Champs Camp only to do media interviews after claiming to have an injury. He is pictured below with his assigned team building group but is notably missing from the video. We all know Vera would NOT let him stoop down to this level of cheese.

Team Jump Rope (the winners) performed a well-choreographed routine, but the real team carrier was queen Adam Rippon with his majestic maneuvers. Always the Bridesmaid Ashley Wagner comes in a close second.


Team Balls (which most there were on anyway)