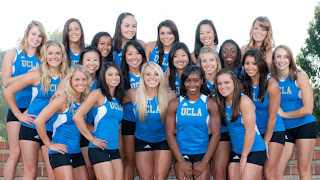 Yesterday's news of Vanessa Zamarippa's torn achilles sent shock waves through the NCAA community.  While no one ever wishes injury on another (unless they are a psychotic gym parent), this injury certainly levels the playing field.  Prior to this injury, there may have been many good teams around the country, but UCLA was stacked to the point that they would likely make a few tweaks and cruise to another National Title.  There were enough gymnasts in the lineup that if even there were a few injuries, they should've had no problem.

The issue: UCLA lost their star and their team anchor.  It is easy to replace 9.85s and even 9.9s to an extent, but Zam is capable of bringing in the huge scores for the team.  Last season, Zam improved leaps and bounds and even became an excellent bar worker for the team.

What they've lost: The graduation of Anna Li hurts UCLA the most on Uneven Bars, where she was a 9.9-10 every week.  Her presence was also an energizing force for the adoring crowds and she emerged a true leader last season.  Zam was to vault what Anna Li was to bars, except UCLA had other strong vaulters.  While perennially a good bar team, UCLA finds itself without their top two gymnasts on the apparatus from NCAAs.  Zam and Li were 1-2 in the All-Around in last year's Super Six.

Gymnasts are a competitive breed.  When one gymnast goes down with injury, another realizes that it is her moment to shine.  For UCLA, the injury to Zam presents an amazing opportunity for Elyse Hopfner Hibbs and Brittani McCullough.  Expect Miss Val to tell us all about Elyse's floor routine and the long creation process.  Sam Peszek will be the new freshman thunderbolt, reminiscent to Tasha in 2005 and Anna Li in 2007.  Aisha Gerber has had an exceptional fall and will likely be a top All-Arounder if healthy.

UCLA remains the favorite for the NCAA Title in many areas.  They know how to win, but the Florida Gators and Crimson Tide are certainly breathing down their necks just a little bit more.

This is the event where UCLA needs to find a star and work their athletes to a higher level of execution. Lichelle Wong will likely be the anchor (if healthy).  Gerber would be a safe choice for leadoff and except that McCullough and Hopfner Hibbs will likely be in the lineup.  This is an event where Peszek's name will hopefully help her eek out an extra half tenth from the judges.  If we are lucky, we may even see a bar routine or two from Allison Taylor before senior night.  Expect this lineup to shift from week to week, as there are plenty of options in the 9.8 range:

Losing a leadoff and a 9.9 will be tough, but Miss Val will likely anchor the lineup with a Canadian duo the way she did in 2009.  If they keep Sato as the anchor, expect something like:

Tom/Sato/Sawa/Frattone for the first spot.


Projected Success: Pac 10 Title and Top-Two NCAA Finish
Posted by OlympicEffect at 11:18 AM