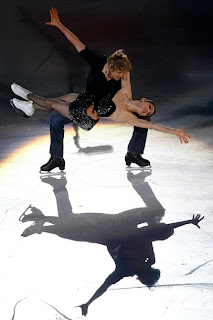 The Grand Prix Final brought together the top skaters in world.  After a weak World Championships and lackluster Grand Prix Series thus, one could not be sure what to expect from the final.  There was a welcome surprise.  After months of falls and uninspired performances, the skaters performed at a level befitting the significance of the competition.

As always, NBC/Universal made us suffer the affliction known as Peter Carruthers.  It is amazing to listen to Peter and know how incredibly bitter he still is about `984.  No one ever celebrated or endorsed the Carruthers much.  They skated the programs of their lives to finish behind the weakest performance by a pair in Soviet history, yet no one ever whined that he was robbed.


Peter's bitterness was most evident during his commentary of Iliusechkina and Maisuradze.  The new Russian starlets have talent, charisma, polish and poise.  The majority of their skating is vastly superior to anything the Chinese are doing.  They are beginning to put it all together, but they do not have the same acrobatic power of the Chinese.  Instead of focusing on their numerous positive qualities, Carruthers chooses to point out their few moments of 'sloppiness.'


I believe Peter Carruthers has watched skating over the last five years, which makes it curious that he would make a point of noting sloppiness from Iliusechkina and Maisuradze.  Moments later, Sui and Han, China's fetus sensations, took to the ice with senior-level tricks and novice-level polish.  Peter cheered and applauded their difficult elements, while failing to note their utter lack of refinement.  Then it hit me: Peter and Kitty were Sui and Han (only without the quad throw.)  Under the respectable judging system, Sui and Han performance would've been judged on par with Tara Lipinski's in the junior ladies at 1995 Nationals: Cute, but artistically weak.  5.6 TM, 5.2 PR.


Bazarova and Larionov's program was tepid.  It appears that Vera hasn't eaten in months and it may explain their lack of energy and attack.  While she is an utter vision, her jumping ability is that of a Canadian lady.   Vera is such a vision that the devil on my shoulder is telling me that she will never be able to get it together.  Her jumps barely leave the ice.  It appears to be a matter of time before they are passed by up-and-coming Russians in the pipeline.


Savchenko and Szolkowy, the pseudo Germans, skated impressively.  Their Pink Panther routine has moments of cheekiness, but I must say that it would make a much better short program.  One can only take so much of the theme.  I enjoyed a good chuckle when Peter Carruthers tried to claim that their lack of unison on their side-by-side spins was 'out of character.'  Apparently he's never seen them skater before.  Their throws remain a gift from above.  The question remains: when are they adding in the side-by-side Triple Salchows?  Aliona is one fierce bitch and she knows it will make them unbeatable.


One thing that Peter has recently discovered is that Pang and Tong do not perform beautiful lifts.  It is only about eight years too late. Their aging bodies make one wonder if they should've retired after their World Championship victory.  Pang and Tong are still good, but their free dance lacks the magic of last year's.  As a pair, they achieve beauty through their passion and emotion.  It just is a bit flat this season.

Special kudos belongs to the sturdy new team of Moore-Towers and Moscovitch.  Their names may be more interesting than their skating, but they have impressive lifts and unison for such a new team.  MTM have side-by-side spin unison that my OCD could only pray the Germans will one day achieve.


The Wonderful World of Ice Dance did not disappoint.  After struggling with levels and a cluster-fuck of a free dance, Marlie finally skated with their shit together.  The free dance is still sexless, but it is performed with much more confidence.  Maybe they dream of cuddling after leaving the Kiss and Cry?  One highlight of the season has been listening to Terry Gannon and Andrea Joyce bait Tanith Belbin for tidbits about Charlie White.  They'll usually butter her up with a compliment about her own career before asking her for dirt.  Mr. White is NOT pleased that his girlfriend always manages to catch and report his mistakes, as she did during his minor twizzle glitch in the Short Dance.  Now that their elements are secure, it is time to up the performance and up the sex.  Tanith agrees.

Pechalat and Bourzat performed well, but are not up to the Canton standard.  They have most certainly improved and will force Tessa Virtue to work her ass off if she hopes for at least a silver medalist at Worlds.

The skating world is slowly recovering from its Post-Olympic Hangover.  The previous POH was not as severe, as Torino proved to be an utterly shitty Olympics.
Posted by OlympicEffect at 3:43 PM