SWTS: Three Times Is NOT The Charm 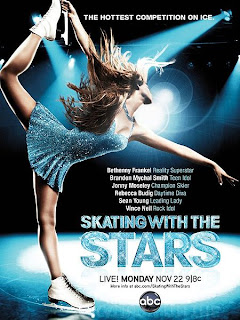 Skating With The Stars continued its embarrassing run on network television this week.  This is a show that clearly could've used some tweaking afters its pilot.  It is as though we the viewers are watching a show being tweaked before it hits the airwaves.

First Major Issue: There was no reason for this show to be 90 minutes.  Me thinks the advertising was sold in advance (like during the first season of Survivor) because there is no way some of these countries would be wasting their dollars on this shame-based programming.  This show needed to be squeezed into an hour.  Thank goodness I watch this show on TiVo, as my ADD and self-worth would never allow me to waste an entire 90 minutes.

The host continues to be a complete wet blanket.  If ABC wanted another hit, Tom Bergeron should've been paid another million or two to walk across the hall at the end of DWTS and deal with these hot messes.


The most memorable aspect of this episode is that the producers created a situation where Brandon Mychal Smith might or might not make it in back in time to perform.  Brandon has food poisoning.  Forcing him to skate could've created one of the most memorable moments in television history.  Instead, we got to learn exactly why Keauna McLaughlin does not have the internal makeup for international competition.  While Brooke Castile was skating with a badly cut hand, Keauna was bawling over her partner on a low-rated reality program having food poisoning.  Keauna recently tweeted that missing the Olympics was the hardest moment of her life.  I thought that watching that inevitable result happen was tough to watch last season, but this is proving to be so much worse.  Keauna's bawling interviews take the cake.

One of the most 'amazing' moment happened when Laurie Ann described herself as an expert over Dick Button.  I get nervous when anyone challenges Dick in anything.  Let's not forget that he was Novice National Champion in Ice Dance!


In the words of Margaret Thatcher, "Johnny Weir has no business criticizing anyone for quitting."  This is a man with a mullet who pulled out of Grant Prix events, faked being hurt at Nationals, left out jumping passes, refused to compete at Four Continents and refused to go to Worlds.


Johnny Weir also created another cringe-worthy moment with Bethenny Frankel where he said that the judges were trying to help her and blah blah blah.  It was a direct response to tweets by Ethan Burgess saying that Johnny shouldn't judge Bethenny given his close relationship with Jill Zarin.  It wasn't so much what Johnny and Laurie Ann said to Bethenny, as the tone they treated her with as opposed to other contestants with inferior performances.  Bethenny was patronized with the tone one speaks to their dog after it pees on the floor.

What is great about Bethenny, is that you can tell she loves skating but wants absolutely no part in this program.  I thought Carrie Ann Inaba's evil smith to Maks on Dancing With The Stars might me the juiciest moment on television.  I was wrong.  I cannot stop watching the moment where Laurie Ann Gibson, sporting a new weave, told Bethenny that it was a nice touch that she skated to her favorite song.  Bethenny's facial reaction was priceless.  I can't wait for Bethenny to be voted off the show, so that she can start giving interviews about what she really thinks of Laurie Ann and Johnny.  The judging duo spend countless hours on their manes and gaudy outfits and then espouse about their professional expertise.  Bethenny has already said that she'd like to shove a skate up Laurie Ann's ass.  If that was an appetizer of what's to come, count me in for the main course.

I swear that Bethenny actually told Vince Neil that she wished that she were going home instead when he was voted off.  Vince is an absolutely horrendous skater.  Vince looks like he leaves the bar in just enough time to skate around the rink like a hung-over father of the year during Christmas Break.  "Honey, spend some time with your kids for once.  Learn their names!"  Bethenny is not a good skater.  She looks a bit better in the clips at the rink, but she stiffens up considerably when it is time to perform.  This makes her stiff and wobbly.  She needs to relax the knees and learn to relax.  That said, she is better than Sean Young and Vince Neil.  If it goes by skating, Bethenny should leave next week.  I don't think she'd be too broken up about it.


It is amazing how awful Vince is, yet Laurie Ann and Johnny gush over how "amazing!" he is.  "A rock star, on the ICE!"  Melissa Gregory also echos this praise when she repeats what the judges say during her weekly youtube critique (only with added enthusiasm!)  Laurie Ann seems jealous of whichever blonde groupie Vince Neil married.  I love how Johnny acted liked Vince's kiddie group lesson for the cameras was serious work.  Laurie Ann and Johnny apply their weaves and drag makeup with Tara Modlin prior to each broadcast.

Quote of the Day: "I'm the TSA of figure skating and I see the talent in you!"~ Dick Button

Rebecca Budig is clearly the best skater on the show, but there is a Brooke Burke quality about her that just makes you want to hate her.  For having the cutest partner, it is amazing how little anyone actually cares about them.


Brooke Castile is clearly the best performer of the pros on the show.  Yet, she is also the most intriguing to watch.  Simply, Brooke Castile is a delightfully fierce girl from Michigan.  Her chemistry with Jonny Moseley is delightful to watch during their weekly packages.  We can only hope that a good affair comes from this.  In terms of his skating, he is one of the best and his number was actually choreographically interesting.  He is clearly performing more than any of the other "stars."  If he can skate with posture that is slightly better than Miki Ando's, he should win the show in a landslide.


The best thing to come out of this program remains the telegenic Tanith Belbin.  For two weeks, she's been the best interviewer out of anyone on DWTS or SWTS.  Tanith doesn't merely echo what the judges say like a mindless idiot (thankyouverymuch Brooke Burke) and she has a good rapport with the stars.  Tanith's performance with Ben was the highlight of the show, although her hair was really looking orange when she was speaking during the package.  Tanith tweeted about how she keeps leaning forward when she talks to the camera.  It is true, but her natural talent is obvious.  Other gigs are already being presented to IMG and she won't have to suffer the embarrassment of this show much longer.

In the words of Brian Boitano, the show is uncomfortable.
Posted by OlympicEffect at 12:07 PM