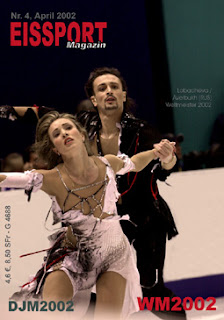 To celebrate the Fierce Jews of Hanukkah, Aunt Joyce has asked me to highlight 2002 Olympic Silver medalist and Russian Jew Ilia Averbukh.

Ilia Averbukh will be remembered for many reasons. I remember him not so much for his skating as for the fact that he, perhaps the most gifted Russian male ice dancer of his time, left a successful partnership with the most skilled Russian female competitor of the time, Marina Anissina, because he wanted to skate with the woman he loved. And what a woman he left Anissina for: Irina Lobacheva. When Averbukh performed with Lobacheva, the phrase "old ball and chain" acquired new meaning. He spent the rest of his career admirably trying to conceal his wife's weak skating skills and compensating for her lack of personality.

Averbukh began skating at the age of 5 because his Jewish mother guilted him into it.

"I decided very early, when I would have a child, it would be a son and he would skate," Ilia's mother told Russian television in 2001. "I am a fanatic skating fan, watched everything on TV and knew even about all the rules. I just knew I would have a son which will have to be a skater - no other alternative."

The influence of a strong Jewish mother soon paid dividends for young Averbukh. He won the 1990 and 1992 Junior Worlds with his partner Marina Anissina.

Marina and Ilia would likely have won Olympic Gold had it lasted. But being a good Jewish boy, Ilia could not turn down his girlfriend Irina Lobacheva. He decided to become Ira's partner instead. Marina Anissina has recalled that she was quite hurt by Ilia's decision. She of course went country-hopping for a new partner, ended up skating for France with Gwendal Pezerat, and quickly surpassed Averbukh in the ice dance rankings. The rest is history.

Lobacheva was not really an established ice dancer but was actually a ladies singles skater. Next to Averbukh's bravado and showmanship, Lobacheva looked insubstantial. Because of his raw talent, she was naturally the accessory. Nevertheless, as the years passed, Ilia and their choreographers found ways to distract us from her technical weaknesses. His love for Irina and the passion that made him ditch one of the best female ice dancers in the world for her was a rare and moving thing.

One finds it harder to be moved by their programs, which range from the mildly entertaining, to the vulgar, to questionable trash.

Their 1998 Rock-n-Roll themed Original Dance holds the record for most spectators blinded by ugliness at an Olympics.

Going against our Hanukkah theme, Aberbukh and Lobacheva did a hideous free dance at 2000 Worlds to Jesus Christ Superstar. They finished fourth. This was the first Worlds anyone could remember when a Russian team did not make the World podium.


At the 2001 Worlds, with help from a pro-Russian judging block, Averbukh managed to drag his wife onto the World podium. They knocked the Canadians and the Lithuanians out of bronze medal position.


By the 2001-2002 Olympic season, they decided to do an ice tribute to the falling twin towers. They felt the easiest way to pander to an American audience was to exploit the passion from the ashes.  Sadly, Irina's level of skating was such that the Russian Federation chose to make a deal with France that secured a gold in pairs but gave the gold in ice dance to the French because Anissina was still a Russian after all.

Ilia and Irina went on to win the 2002 World Championships without fanfare.  No one thought much of 'A Time For Peace,' nor her skating skills.


The next season, Mother Russia thought so little of them that they did not cheat properly or exchange enough money to secure their title on North American ice.  Lobacheva and Averbukh lost their final competition to Canadians.

After his competitive career, Ilia became the star and producer of his own ice show.  Like a good Jew in business, his tour became extremely successful and attracted the top Russian skaters.  Ever ambitious like the best of the chosen people, Ilia even attempted to bring his tour to North America despite lacking an Olympic Gold medal.  He was unsuccessful.  After shaming him countless times, there was only one thing left to do: divorce her.
Their love story serves as a cautionary tale: never let love get in the way of a gold medal.
One can be sure Ilia's mother agrees.
Posted by Margaret Thatcher at 10:33 PM